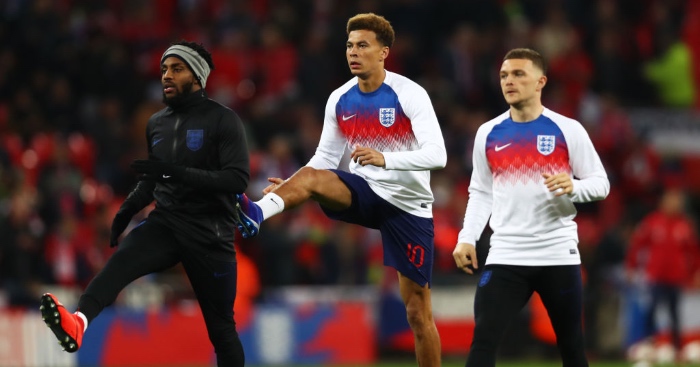 The England team could look very different for Euro 2021 than it would have done for Euro 2020. The tournament that would have been too soon for some may now be at the perfect time as they prise a Three Lions jersey from those that are barely hanging on. We’ve looked at six players with more chance of playing at Euro 2021, and here are six with less…

Jordan Pickford
There’s very little doubt Jordan Pickford would be England’s number one were Euro 2020 going ahead – he’s not perfect, but he remains the best option. Gareth Southgate is keen on his skill with his feet, and his madcap puppy approach has never cost England as much as Everton. But a potential further year of mistake-ridden hyperactivity could see the England boss plump for the relative composure of literally anyone else. By the summer of 2021 that save against Colombia may no longer be enough to keep his place.

Kieran Trippier
Southgate bloody loves him, and there is plenty to admire. An England player upping sticks and moving abroad shouldn’t still be a big deal, but it is. And yet, despite his obvious strength of character and the goodwill that remains following his wonderful displays in England’s last major tournament, there are a shitload of very good English right-backs that are only getting better. Trippier’s got very good delivery, but it’s not as good as Trent Alexander-Arnold’s; he’s a decent defender, but Aaron Wan-Bissaka is better. And if Southgate is looking for the perfect balance between defence and attack, Reece James is more likely to be his man come 2021.

Dele Alli
What is Dele Alli? Does anyone really know? Whole games can go by without you really noticing he’s on the pitch. Apart from when he’s giving the ball away with an infuriating flick. He used to score a lot of goals, but doesn’t really do that anymore. He would be in the squad this summer through experience alone – 37 caps at the age of 23 is impressive – but would likely be sitting on the bench, with far more influential options in the final third of the pitch. And if Southgate does want to manufacture his team to fit a number 10 into his line-up, by 2021 that space will surely be inhabited by Jack Grealish, James Maddison or Phil Foden.

Kyle Walker
With the incredible skill levels shown by other English right-backs, Walker being very, very fast will not be enough to secure his place in the Euro 2021 squad. His experience and versatility would have been enough this summer, but another year of opportunity for TAA, AWB and, erm, RJ will shut the door forever. England may well have three right-backs in the team by 2021, but there won’t be a place for the two that started the 2018 World Cup semi-final…

Danny Rose
…unless either of those two is doing some serious weaker foot training in self-isolation. The abundance of English right-backs is made more stark by the relative dearth on the opposite side of the pitch. Ben Chilwell is England’s standout option despite a frankly average season, and with the defensive capability of winger turned full-back Bukayo Saka a potential concern, Danny Rose may well have featured this summer by default. Southgate claims he picks on form, but often favours those he knows. Which may also have given Rose the nod over Luke Shaw and Luke Shaw junior at Manchester United. But that won’t be the case for long.

Danny Ings
Although Harry Kane and Marcus Rashford were both claiming they would be back in time for the summer, they were never going to be properly fit. And we don’t take unfit players to major tournaments…okay we do, but we shouldn’t. And on the off-chance Southgate wantonly ignored years of history of taking crocked players into summer competitions, Danny Ings would surely have been included; he may have been in anyway. But this summer was his best, and possibly only chance; this campaign has felt closer to Rickie Lambert than Kane in one-season-wonder-ness.