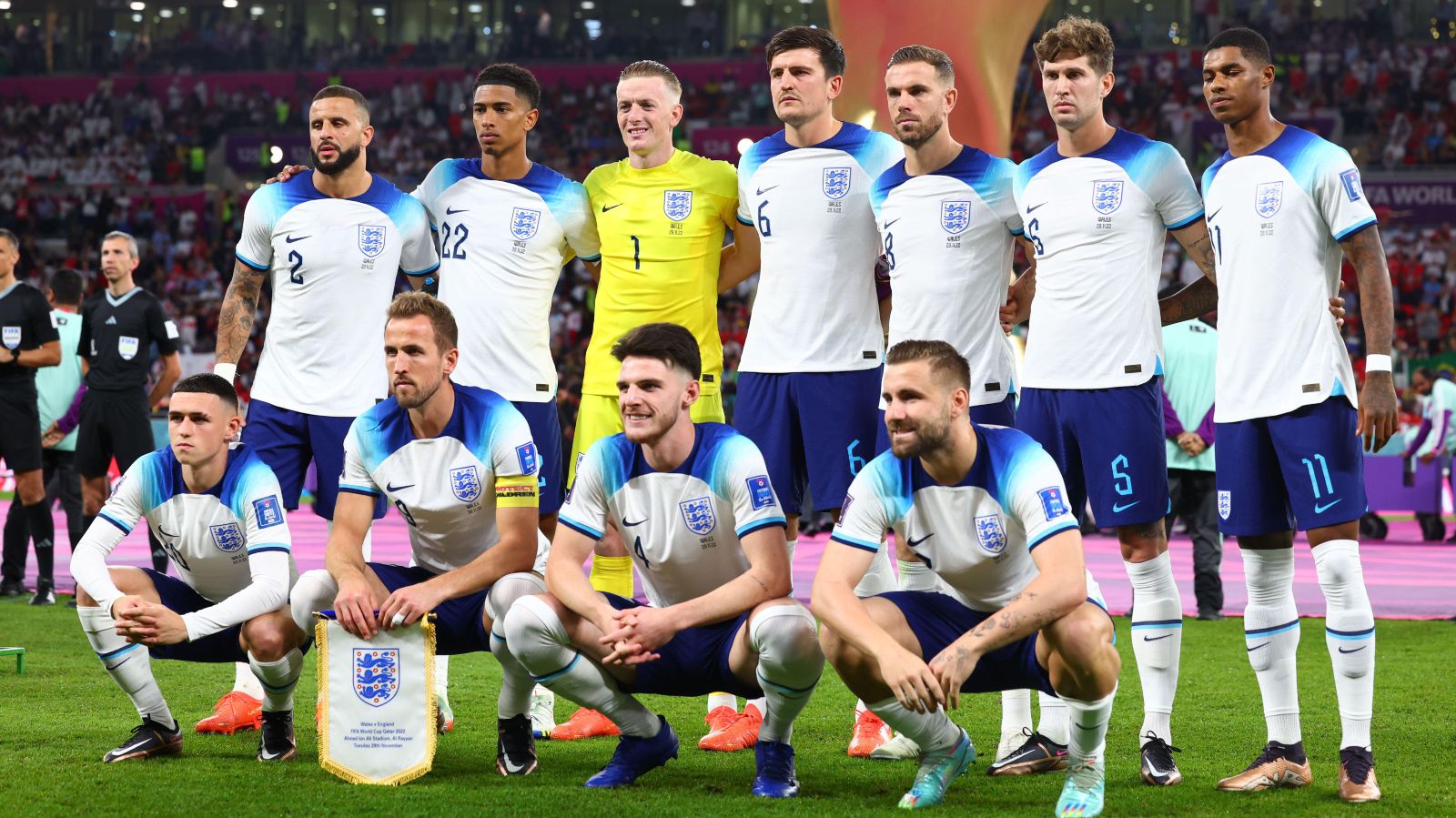 Phil Foden and Marcus Rashford enjoyed themselves against Wales, with Kyle Walker and the defence faring well. Jordan Henderson… talks.

If 16 Conclusions are more your thing, knock yourself out…

JORDAN PICKFORD
Has already kept more clean sheets than he managed in all of Russia 2018 and he bloody well earned it with that majestic dive at the end of the first half. There was a tiny bit more urgency and seriousness in his acrobatics for a James cross which evaded everyone after half-time. A good save from the deflected Moore effort finally let him properly sully his gloves and he was neat enough on the ball. Bring back ravey Jord. This fella is boringly efficient.

KYLE WALKER
Seemed to quite enjoy the company of someone else who can run really quick, as evidenced when he followed James all the way into the centre circle to clatter him. There was nothing spectacular from Walker but then there didn’t need to be, with the other full-back relied upon more often to provide width. The Manchester City defender was neat enough in possession without ever dropping his usual clanger. It was also to Walker’s credit that he managed to tune into the same wavelength as Bellingham when the Dortmund midfielder entered full flow to create that first-half Foden chance. Not bad at all for his first game of the tournament; you can see why Gareth trusts him.

JOHN STONES
Yep. Good work. Should have scored at least once. It is a lovely, welcome change that his mistakes almost always come at that far less costly end and no longer in his own defensive third. That should probably get more attention because his concentration levels and general aura have come on markedly with age and experience. Remember when Fikayo Tomori was a thing?

HARRY MAGUIRE
Pure box office. The passivity of Wales allowed much of his defending to be proactive and carried out in the opposition half, which Maguire absolutely thrived at. The trademark marauding run came midway through the first half as he swashbuckled all the way into the area before completely shonking his cross out for a throw-in. Textbook. Heritage. Glorious. Bit strange when he tried to head a relatively strong Moore shot back to Pickford from about 18 yards but still, he needs to have his moment.

LUKE SHAW
Really didn’t notice him all that much, which is no bad thing. Got in the way of Rice when the midfielder wanted to absolutely leather a loose ball which had just been cleared. During the same attack he overlapped himself straight into an offside position for Rashford, which his club teammate surely appreciated. It was a weird few seconds for Shaw, who has otherwise been reliable at worst so far for England.

JORDAN HENDERSON
Improved in the second half but it does say a great deal that his main contribution to this England team, as Jermaine Jenas was incredibly keen to stress on co-commentary, is that you can constantly hear him. He talks a lot. Like loads. To everyone. Points at them and everything. Tells them where to be and what to do. Probably overshares. It must be a f**king ballache when he and Conor Coady get into a conversation anywhere. It surely helped make England’s press a little more cohesive but good lord. In terms of his actual play, there was the time he bizarrely misjudged the flight of a Shaw cross when completely unmarked at the back post, before crossing low to absolutely no-one straight after. Another delivery from his favoured inside right position was also atrocious. He doesn’t seem to turn on the ball sometimes. But he was involved in the creation of one of the first-half Foden chances and he did a bloody load of receptions. Loves them. Can’t get enough of them. Is most likely telling everyone about them in the dressing room now.

DECLAN RICE
Taken off just before the hour along with a player returning from injury and Sir Harold of Kane, which underlines the importance of Rice to this team. He’s just obviously great and the minority of performative goons who like to ask their seven Twitter followers, ‘wat dus Declan Rice even do lol?’ after each game is ever-dwindling for good reason. The turnover he forced in the build-up to Rashford’s chance was elite reading of the game and his level rarely dropped from there.

JUDE BELLINGHAM
Unbelievable balance, poise and skill to set up the chance Foden skied in the first half. He should have fallen over or been tackled at least twice but ordinary rules don’t apply here. Some of his touches were divine and despite his advanced position and relative freedom to take risks, he barely ever made the wrong decision or even executed anything poorly, aside from that late finish which should have been put out of Ward’s reach.

PHIL FODEN
Is that the first recorded instance of The Clamour being entirely justified? A first half which was ordinary at best took in two entirely harmless shots and only one relatively bright moment, when he collected a difficult ball on the halfway line and led a four-on-three attack. Then half-time happened, during which Southgate presumably said some remarkably stern words like ‘gosh’ and ‘ruddy heck, folks’ to fire England up. Foden burst into life with one stunning run which helped unlock the game, drifting central with the ball from the wide left to win the free-kick Rashford converted. Minutes later he got his goal and you know what fair enough, he’s decent. But it is funny – particularly after that bloody USA draw – that now Southgate has about 42 forwards he can’t drop without causing a national incident.

HARRY KANE
The bloke already has his World Cup Golden Boot so has set about trying to make sure the next one goes to a teammate. After his performance as playmaker extraordinaire against Iran, Kane showed once more why he will continue to drop deep or drift wide to the impotent fury of many a watching fan and pundit. His ball into Rashford for that early chance was perfect, much like the delivery for Foden’s goal. There might be no-one better at that no-look cross from the right-hand side. It’s a weird art to master but clearly a worthwhile one. Would be nice for him to get a goal but no, actually, it’s far better that England have scored nine times so far and Kane has none.

MARCUS RASHFORD
Welcome back, fella. It’s a massive shame you’ve presumably had to stop focusing on trying to make sure children around the country are fed because this is the Marcus Rashford we remember before you started prioritising winding up weird Tories over #thefootball. Rashford’s improvement obviously has nothing to do with being able to properly recover from a series of injuries, as well as the introduction of an actual coach to his club career. Has presumably started practicing free-kicks again, considering he might get more of a look in for Man Utd now that dead-ball specialist fella has left. Took his second incredibly well and could have had a third. Shinned an overhead kick. Should have scored in the first half when put through by Kane but weirdly delayed his finish. It was also Rashford’s brilliant pressing which made the Foden goal happen. For only his second start at a major tournament for England, after the 2018 World Cup group dead-rubber defeat to Belgium, that was phenomenal. And most important of all, it will give the manager A Headache. Dropping a confident, in-flow Rashford would be brave.

TRENT ALEXANDER-ARNOLD (on for Walker, 57)
Played some part in the second Rashford goal. Certainly did nothing wrong but perhaps made to look subconsciously worse by the impact the two other substitutes brought on for the final half hour had.

KALVIN PHILLIPS (on for Rice, 57)
Has himself a World Cup assist to go with his one from the Euros. It was a lovely little clipped pass over into space for Rashford to attack.

CALLUM WILSON (on for Kane, 57)
It’s starting to feel like taking him over anyone, Ivan Toney or otherwise, was not especially foolish. In terms of a stand-in for Kane, Wilson is playing that creator-in-chief role phenomenally well from the bench. Good interplay almost gifted Rashford his hat-trick and Bellingham also profited from the Newcastle forward’s unselfish awareness. That’s three chances Wilson has set up in 47 minutes – as many as Bruno Fernandes, Cristiano Ronaldo, Frenkie de Jong and Raphinha.

JACK GREALISH (on for Rashford, 76)
Had time for one late, jinky run but little else.