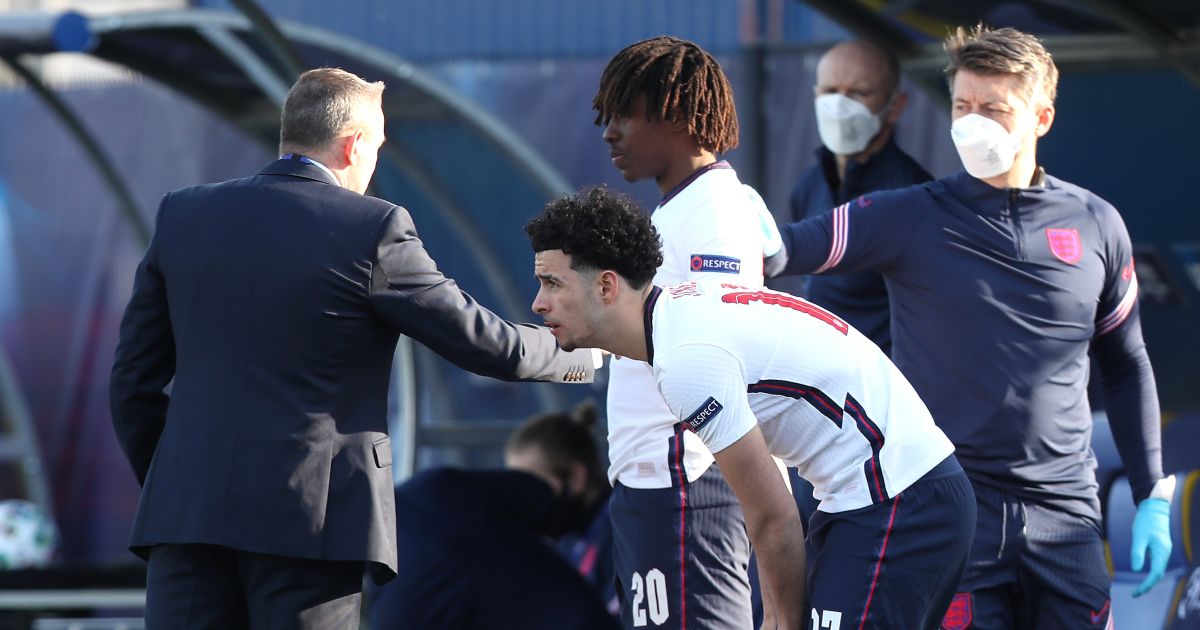 England have an unbelievable crop of young talent. Some players are good enough to conquer any obstacles but they all deserve better coaching.

With plenty of talent, a wealth of top-flight experience and world-class coaching at club level, surely the FA can find a more inspiring figurehead of youth than Aidy Boothroyd?

England have been blessed with exceptional ability across their younger age groups in recent years and the trend has continued with the brilliant array of talent in their squad for the 2021 European Under-21 Championship. But following their lifeless opening-day defeat to Switzerland, the mediocre coaching is painfully apparent.

If the Young Lions are designed to provide a pathway to Gareth Southgate’s senior team, they’re doing so only in an illusory fashion. Boothroyd opted for a 3-4-3 system against Switzerland, mirroring the England manager’s favoured shape of late. But this didn’t seem like joined-up thinking; it felt like cheap imitation.

It looked like it, too. All of the incredibly talented players at his disposal looked lost and uncomfortable throughout the defeat. If the aim is to prepare these players for a call-up to the senior team, then the current situation is comparable to dipping your feet in the bath to prepare yourself for a swim across the Channel.

Granted, in a lot of cases talent will conquer all obstacles. Dwight McNeil of Burnley has previously trained with the first-team due to injuries and was said to have wowed the players and coaching staff with his technical ability and intensity in training.

But a lot of these players will be quietly muttering to themselves about the state of the U21 coaching setup. Particularly those who play at Premier League level and are often used to an elite standard – not this wacky, ‘do-it-yourself’ tactical farce where they’re expected to dig their side out of holes through individual brilliance.

Boothroyd’s résumé in the job consists of a disappointing penalty shoot-out defeat to Germany in the 2017 European Championships and victory at the 2018 Toulon Tournament. But the Young Lions are a squad where results only carry so much weight. It’s the performances that are open to forensic scrutiny and it’s these performances that should inform the FA that their project isn’t functioning properly.

Switzerland’s willingness to cede possession to England dumbfounded Boothroyd’s side. With no patterns of play and no plan of action with the ball, much of the game saw teammates looking for Callum Hudson-Odoi to weave some magic and unsettle the opposition.

As wonderful a player as he is, he’s not Diego Maradona.

Just a reminder: Hudson-Odoi is playing under Thomas Tuchel at Chelsea: a manager famed for his exacting attention to detail, his methodical tactical planning and an obsession with dominating the opposition in every phase of play.

Poor Callum must feel like he’s crash-landed on a lurid, alien world where tactics aren’t a consideration and gruff, charmless ex-Northampton Town managers are entrusted with a squad of wonderkids. Such is the marked difference in quality between the coaching at club level and with England’s under-21s.

Boothroyd is fortunate he has the talent in his squad to likely bail him out of a tricky start to their group. Eddie Nketiah, largely anonymous against the Swiss through no fault of his own, is already their all-time top goalscorer. One expects that both his quality and consistent record at this level will see him break free of his manager’s tactical birdcage and drag his team through the group.

Similar questions have lingered throughout the senior manager’s tenure also, with some suggesting the job Southgate has done is something akin to a motivator or a cool, beardy life coach. This doesn’t hold quite so much weight as the England senior team consistently plays well, even if some of their most frequent opposition isn’t all that imposing.

The FA has had a pretty awful few weeks and their plans for an ‘England DNA’ and the supposed connectivity across the age groups are perhaps the only things they can hold their heads highly about right now. How much longer can responsibility for this group of wonderfully talented youngsters be left with a manager so patently incapable of leaving any real impression on his team?