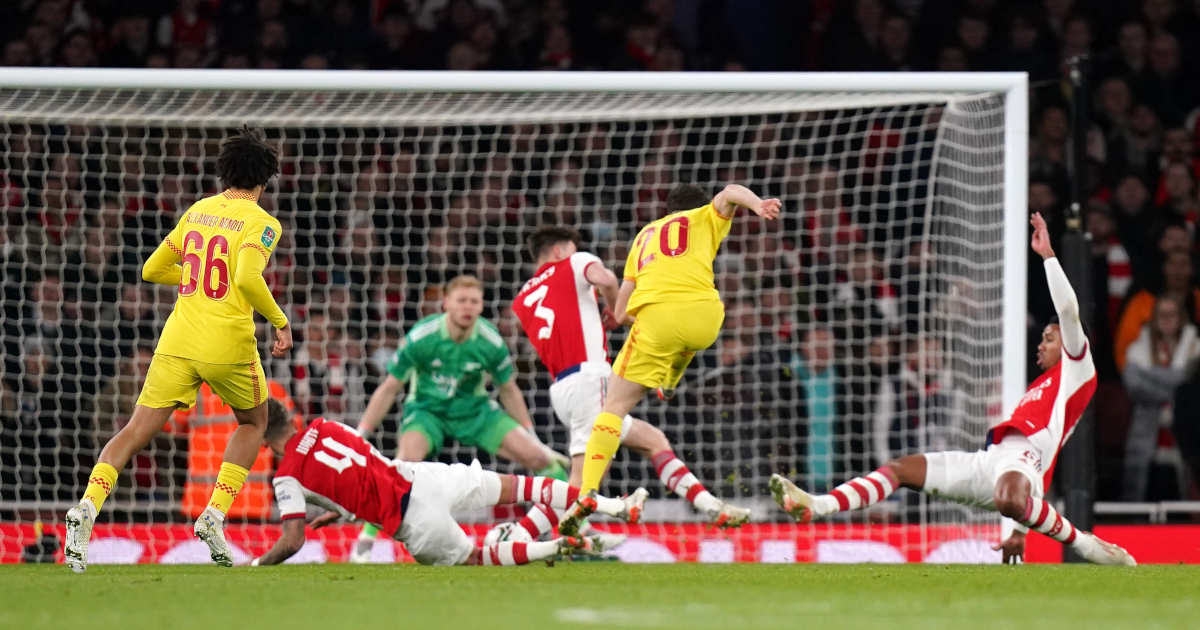 Arsenal haven’t won the Carabao Cup since 1993, and they’re going to have to wait at least one more year after losing to Liverpool.

The Carabao Cup has been an achilles heel for Arsenal since Carabao was a glint in a mad scientist’s eye. They’ve only ever won it twice, and not at all since 1993. It also happens to be their last chance of silverware for this season. A place in the Premier League top four is still to play for, but don’t get to release a commemorative shirt for and DVD set that. Not yet, anyway.

But who are Arsenal, in the third week of 2022? We’ve only seen them in three games, a 2-1 home defeat against Manchester City on New Year’s Day which felt like a moral victory – the best sort available when an actual victory is snatched from your grasp in the dying seconds – an insipid 1-0 defeat at Nottingham Forest in the FA Cup about which the best that can be said was, at least it mostly wasn’t their first team, and the first leg of this semi-final, which ended in a goalless draw of so little consequence that it might as well not have even been played unless you count the sending off of Granit Xhaka and his suspension for this return match.

And even when they are playing, Arsenal can be enigmatic at the best of times. They’ve played three games this year, two against arguably the best English club sides of the last decade, one of which ended in the narrowest possible defeat and the other in a taut draw, and the third against a Championship team, which was like a 90-minute long slow-motion clown car crash. Sometimes they’re more like the former, and when they are they can be exhilarating to watch in full flight, but sometimes they’re more like the latter, and it’s the fact they can be like the latter at all which is probably the biggest single reason why they’ve not qualified for the Champions League for a few years, now.

Apparently encouraged by a swell of noise at the kick-off, Arsenal started brightly, and for the first quarter of an hour they were the better team, even coming close to scoring when Alexandre Lacazette dinked a cute free-kick against the Liverpool crossbar, via the fingertips of the Liverpool goalkeeper Caoimhin Kelleher. But the warning sign was fired when Joel Matip’s tap-in from Fabinho’s downward header was called offside after thirteen minutes, and seven minutes later Liverpool took the lead when Diogo Jota’s complete mis-kick from the edge of the penalty area completely wrongfooted Aaron Ramsdale and dribbled over the line as the goalkeeper looked on helplessly.

The goal seemed to settle Liverpool, who controlled the game for much of the rest of the half. Arsenal occasionally fizzed, and when one of their players did move forward with the ball the crowd got behind them enthusiastically, but too often the attacking player ran out of ideas, space, or both. There were stray passes from both teams, and play was scrappy, in places. By the time the game was approaching half-time, Liverpool were already starting to go at a more leisurely pace. They got to the interval without having seen too much direct threat from Arsenal following Lacazette’s early shot.

Twice within the first fifteen minutes of the second half, Liverpool might have extended their lead, first after 51 minutes when Kaide Gordon blazed over from eight yards and then eight minutes later when Ibrahima Konte’s downward header thumped out off the base of the post. The crowd remained noisy and Arsenal managed to get better possession of the ball, but the few chances they did create didn’t come anywhere close to threatening the Liverpool goal, and as they pushed forward and the game started to loosen up in the middle of the pitch, it felt increasingly as though there might be gaps for the visitors to exploit on the break.

With just over 15 minutes to play, Arsenal introduced Thomas Partey – who may not even be aware of the extent to which he’s already become known as ‘Thomas Work Event’ – fresh from an inauspicious performance from Ghana at AFCON, which ended in them failing to get through the group stages of the tournament, into proceedings. Within five minutes, Liverpool had doubled their lead. A delicious through ball saw Jota and Ramsdale charging towards each other. Jota got there first and clipped the ball over the goalkeeper, and after a tense wait while a flag for offside from one of the assistants the goal was given. Partey’s part(ey) in the game ended early when he picked up a second yellow card for a studs up tackle on Fabinho which probably would have been a straight red had the yellow not already been given. Perhaps playing a player in a cup semi-final on the evening of the day that he’d flown back from abroad wasn’t the wisest of decisions.

So Liverpool, then, turned out to be just a little too strong for Arsenal and they thoroughly deserve their place at Wembley. After a rocky opening few minutes, they put in a consummately professional display of closing the ball down, nullifying Arsenal’s threat, and taking their chances. It was a comfortable win for Liverpool, one during which it didn’t often feel as though they had to break into that much of a sweat, with Trent Alexander-Arnold and Diogo Jota acting as particularly transformational players. Arsenal’s confidence felt a little brittle from the off; the way in which these two combined for the second goal killed off any remaining likelihood of Arsenal returning to Wembley.

Arsenal have wavered from the sublime to the ridiculous this season, and in losing to Liverpool they gave a further demonstration of where they are at the moment. This looks like a happier and more settled team without Pierre-Emerick Aubameyang, and there were spells when they dominated possession and made Liverpool work. But they lacked a goalscorer, a point of light around which their attacking play could focus, and too often they got to 35 or 40 yards from the Liverpool goal before running out of either inspiration or space, while the delivery of their final ball was atrocious, at times. And yes, Arsenal remain slightly frustrating. It might have been considered that they’d done the hard work by coming away from Anfield with a goalless draw, but in the return match Liverpool were at their imperious best. They will go to Wembley to play Chelsea in the final. Enigmatic Arsenal’s wait for a third Carabao Cup win continues into a third decade.