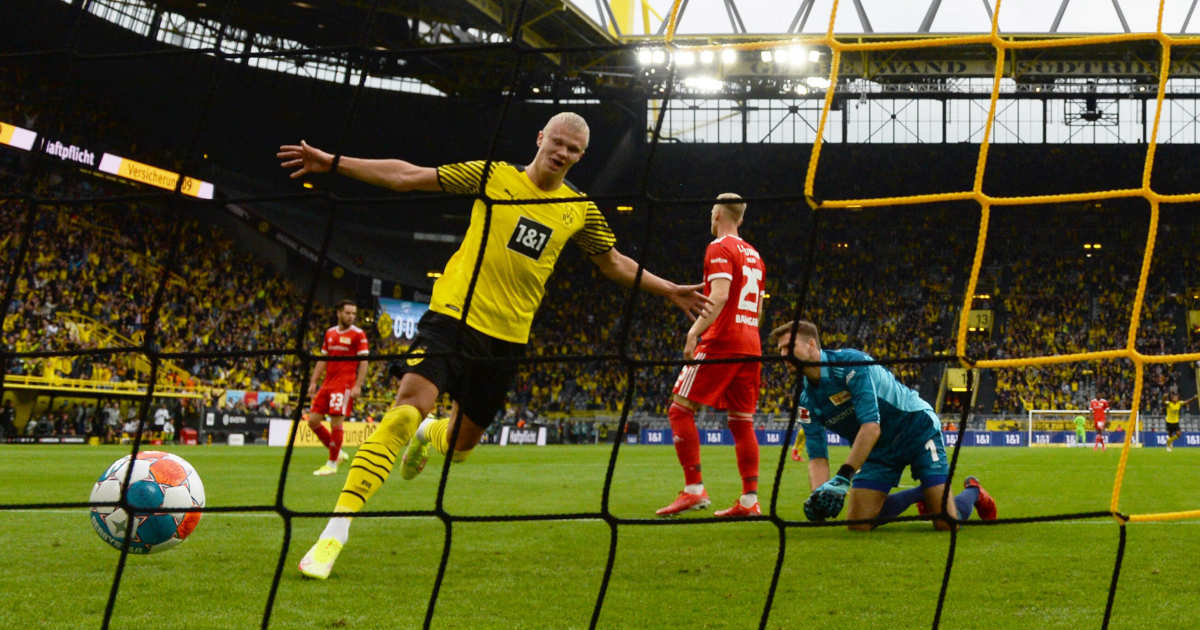 Erling Haaland is a footballing phenomenon, but is he actually football’s first successful automaton?

Small wonder he’s being trailed by all of the gargantuan megaclubs. Erling Haaland scored another two goals for Borussia Dortmund against Union Berlin in the Bundesliga at the weekend, taking his total number of goals for the season to 16 for both Dortmund and Norway.

In every direction you look, the statistics are breathtaking. Haaland has now scored in his last seven successive matches, and has been Man of the Match in four of them. His career goalscoring record is like something from a bygone era; since signing for Dortmund for €20m last year, he’s scored 47 goals in 48 appearances, a record that he’s pretty much replicated for the Norway national team, for whom he’s scored 12 in 15.

Dortmund’s match against Union Berlin was pretty standard fare for the home team so far this season. Having raced into a 3-0 lead, with Haaland having chipped in with the second goal – a fairly routine close-range header – their somewhat shaky defence allowed Union to pull the score back to 3-2 with nine minutes to play.

Dortmund have not kept a clean sheet in the Bundesliga yet this season so jangling nerves were justified, but this feeling of discomfort only lasted for two minutes before Haaland lofted the ball high over the Union goalkeeper Andreas Luthe to put the result beyond reasonable doubt. It was a magical goal, a finish which dropped under the crossbar at such a precipitous angle that it was difficult to believe that the ball hadn’t been guided there by remote control.

All of this leads to a question which nobody in professional football seems prepared to answer: is it possible that Erling Haaland is a robot, an automaton created to play football to a degree of quality that squidy fleshbag humans, with their old-fashioned fallibility, simply cannot match?

This isn’t just a matter of his footballing ability, exceptional as it may be. It’s also his appearance. Built an Ivan Drago-esque 6’4″ tall, and with facial features so smooth as to be alien-like, Haaland has an other-worldly quality. He runs as though all four of his limbs are trying to escape the rest of his body in different directions at the same time, he scores goals that combine the presence of mind and the trigonometry skills of a super-computer, and when he shoots it can be with the thunder of the gates of hell slamming shut.

In many respects, Erling Haaland feels like the next stage in the evolution of the game, a Norwegian’s idea of what the perfect robot footballer might look like. But the problem is the same as with so many types of Artificial Intelligence. Any plans to introduce robot footballers would, presumably, be fiercely resisted by UEFA and players’ unions, so the plan seems to have been to introduce him by having him blend in seamlessly with the rest of the football eco-system.

A name was chosen that was reminiscent of another era – the question of how it turned out to be Alf-Inge Haaland’s son who became such a phenomenon has not been satisfactorily answered – and his introduction came as if by stealth, drip-fed into our collective consciousness through spells with Byrne, Molde and RB Salzburg, before taking a huge step towards the big time with his transfer to Borussia Dortmund.

The technology isn’t quite fully cooked yet, and we can see that this particular automaton isn’t perfectly human. His features are just a little too smooth – comparisons have been made to Odo from Star Trek; Deep Space Nine and Ivan Drago, the near-superhuman Soviet boxer from Rocky IV – while his football sbility hasn’t quite been tweaked enough for him to blend in among the sea of actually human professional footballers. His finishing is a little too perfect. His vision is a little too clear.

Perhaps this is why the richest clubs have not yet captured Haaland. When he left Molde for Salzburg, Leeds United were said to have made an attempt to take him to his father’s club, while Manchester United’s repeated failures to land him have been well-documented, with rumours of their desire to take him to Old Trafford remaining persistent to this day.

It seems at least possible that these clubs have decided to hold on until the technology behind Haaland has been perfected. The alternative, that Manchester United’s transfer policy over the last few years has broadly been a matter of throwing huge cheques at players without any particular policy of co-ordinating who those players might be or how they will improve the team itself, seems extremely far-fetched. It certainly seems improbable that they would have missed out on signing him for €3m because they got mixed up over time-zones between European countries.

Haal 9000 will eventually end up at one of the megaclubs, of course. Big money usually gets its way in the end, and Barcelona are already back to their familiar ways of stating confidently that they will sign every elite level player in Europe, even if they don’t have anything like the money to do so. But in the meantime we’ll just have to make do with seeing him in the Bundesliga every weekend, watching him continuing to score outrageous goals at an astonishing rate, all the while looking out for sparks flying out of his ears or other glitches from this experiment. Fingers crossed that he doesn’t do to Bayern Munich what Ivan Drago did to Apollo Creed in Rocky IV.