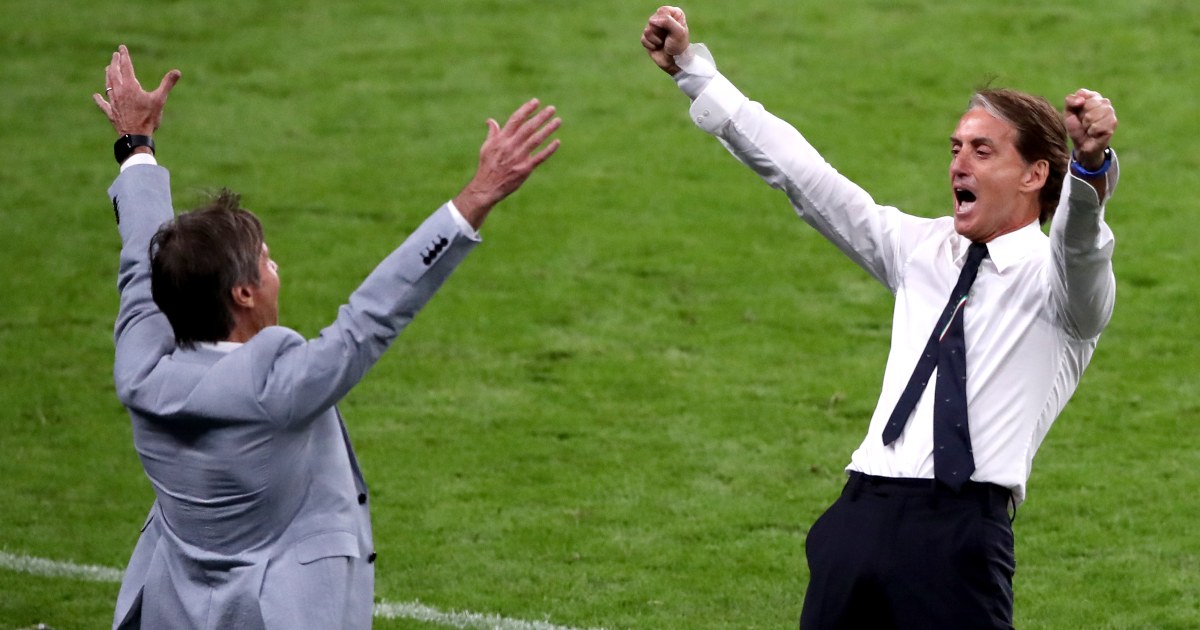 Even when Roberto Mancini is wrong these days, he’s right. The Italy manager’s Midas touch is just one of the reasons why the Azzurri are emerging as one of the hot favourites to enjoy more Wembley glory in a fortnight.

Italy sealed a quarter-final place with a 2-0 win over Austria in which they were made to work harder – and longer – than at any other point in their 31-game unbeaten run.

Mancini’s men arrived in London after a group stage in Italy that reaffirmed their title-winning credentials. They cruised through three matches, scoring more goals than any other Azzurri side in a European Championship group while thrilling Rome and the rest of the continent with an intensity and verve about their play that so many of their rivals refuse to embrace.

Moving to London was billed as the first major test of these Championships – and by some, their record run – and so it transpired. Austria pushed Italy harder than many expected. But Mancini’s winning machine eventually clicked into gear, thanks in no small part to a kick-start from the manager.

Italy started the knockout stages as brightly as they finished their perfect group campaign, with Leonardo Spinazzola giving us another glimpse of what he can do with the freedom Mancini allows before Jose Mourinho gets hold of him at Roma next season.

Marco Verratti, given the nod ahead of Manuel Locatelli in midfield, brought the drive and Italy cornered Austria for much of the first half. But for all their dominance, the closest they came to breaking the deadlock was Ciro Immobile’s thunderb*stard that cannoned off the top of the post.

Then, after the break, Italy showed a vulnerability that we haven’t seen in this tournament and for months, maybe years, before. The intensity plummeted as Austria gained a foothold. They would have claimed something far more tangible had Marco Arnautovic not been a smidgen offside when his header beat Gianluigi Donnarumma.

Mancini used the VAR check, lengthy by this tournament’s standards – guess which league provided the officials – to reassess the decision to play Verratti over Locatelli. But it was the other half of the double change which brought a greater impact.

Matteo Pessina replaced Domenico Berardi and the Atalanta midfielder had a huge role in both Italy goals when they eventually came in extra-time. Pessina won’t be credited with a direct involvement for the deadlock breaker but it was his awareness and run from deep that dragged David Alaba in the middle of the Austria box. While Alaba left the back door unattended, another Mancini sub, Federico Chiesa, sneaked in to control with his head, touch with his right foot before finally beating Daniel Bachmann with his left.

Pessina then scored his second goal of the tournament to enhance his claims of starting the quarter-final, something most of Mancini’s five attacking substitutes achieved. Another, Francesco Acerbi provided the stubborn hold-up play before teeing up Pessina to score, prompting a celebratory face plant.

Matteo Pessina completed more take-ons than any other #ITA player against Austria (4).

Mancini’s celebration with Gianluca Vialli offered a nostalgic nod to Italy’s past but the present, with this manager and this squad, is getting more exhilarating with each match the Azzurri tick off on their winning run. That’s a dozen now, in addition to 31 unbeaten.

Not even the concession of a goal for the first time in 1169 minutes – another record – could dampen the senses. If anything it heightened them. Another prompt, as if the players need it with Mancini breathing down their necks, to maintain the standards which have put them in a truly mouthwatering position ahead of a quarter-final trip to Munich to face Belgium or Portugal.

Before that, Mancini has decisions to make over his XI with both scorers doing more than simply applying a finishing touch to justify the clamour for their selection. But such is the quality running through Italy’s squad, in addition to their confidence and momentum, Mancini can’t barely go wrong.