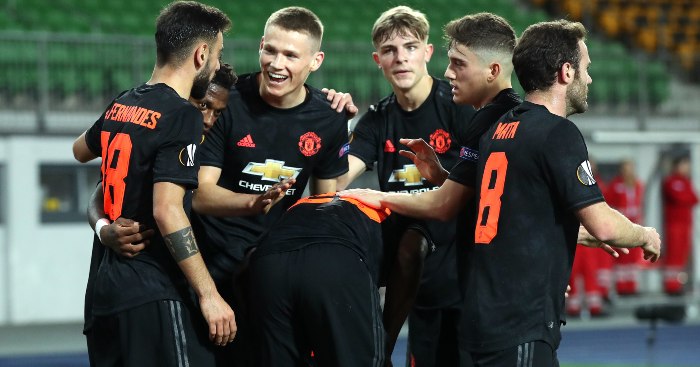 In stark contrast to what we have come to expect from Manchester United in recent years, Ole Gunnar Solskjaer’s reinvigorated side made the very best of a bad situation in Austria.

In front of no one bar LASK employees, the media and a bloke with a blanket over his head passing himself off as a ghost, United maintained their recent fine form to open up a five-goal advantage to take into their Europa League last-16 second leg, to be played God knows when. If at all…

There is an argument that this game should never have taken place either. The fate of the competition looked more uncertain with each passing hour between United’s arrival in Austria and kick-off in an eerily-empty arena. The 90 minutes that followed strengthened the argument for suspending European and domestic competitions rather than persist with locking turnstiles and carrying on regardless.

As was the case in Valencia on Tuesday and Paris last night, the soundtrack to this tie was the sound of boot on ball and the monosyllabic shouts of the players, whose professionalism and motivation were sorely tested in the soulless Linzer Stadion. For supporters watching at home, it is a struggle to retain attention without the atmosphere of fans present at the ground. For those on the pitch, some who perhaps feel they shouldn’t be, it must be a similarly substandard experience.

It was certainly that for the hosts. LASK lost around £875,000 in gate receipts on a tie that apparently could not wait and the players were robbed of their best chance to bloody the nose of another European big boy in front of the crowd they deserved as a reward for their previous Europa League exploits. If this week has been a trial for football without supporters, then the verdict seems clear: it does not work, either in terms of a spectacle or, as we have seen elsewhere, as a measure to stop the congregation of large crowds.

Not that the Red Devils were found wanting for motivation as a United team performed behind closed doors seemingly for the first time. Impressively, Ole Gunnar Solskjaer’s side maintained their recent high standards, both in terms of mentality and technique, to make light work of the Austrian Bundesliga leaders.

Solskjaer found the balance between rotation and picking his strongest possible XI, with Scott McTominay and Eric Bailly more than adequate cover for Nemanja Matic and Victor Lindelof. With Anthony Martial missing because of injury, Odion Ighalo again led the line, and the Nigerian too demonstrated that he belongs in this United squad, not just as emergency cover.

Indeed, Ighalo got the Red Devils rolling with one of their goal of the season contenders. Paul Ince thought that the absence of a crowd to see him fail made Ighalo more willing to experiment with juggling the ball on the edge of the box before lashing a volley goalwards. But the centre-forward is so high on life at United right now, he would almost certainly have attempted just the same if his stage was a sold-out Nou Camp. His strike deserved that audience.

As did Bruno Fernandes’ assist and everything else the Portuguese playmaker did tonight. His touch to put Ighalo through again in the second half when the striker rolled the ball against the base of the post was even better. One of the curses for United fans of this coronavirus pandemic – death and suffering on a horrifying scale aside – is being denied further glimpses of Fernandes’ magic as he makes delightfully light work of carrying the Red Devils’ creative burden.

Much has been said and written about the new signing’s effect on his United team-mates and again it was evident in Austria. After months and years of stagnant, cautious football, the Red Devils are all following Fernandes’ lead. It is no coincidence that since his arrival, midfielders and defenders are now passing penetratively through lines; full-backs and attackers are piercing opposition ranks with their runs, suddenly invigorated by the expectation that they will be found.

Daniel James has been making those bursts this season, so often in vain both with and without the ball. After a stunning start to life at Old Trafford, the winger’s form since has been inconsistent but he too got the goal – his first since August – his confidence needed, certainly if the scream which greeted it was any indication.

From there on in, other Red Devils helped themselves to a bit of what they fancied too. Fred fed Juan Mata with a sublime assist for United’s third; Tatith Chong, who has desperately struggled in the first team, laid on Mason Greenwood for a typically-ruthless fourth; and Andreas Pereira’s unquenchable thirst for a long-range goal was finally satisfied with the last kick of the game.

With so much for United to build upon, it is such a pity that their momentum has to be shunted by issues far beyond their control or indeed anyone else’s.