Home F365 Says What do legacy fans do now? Return the contempt? 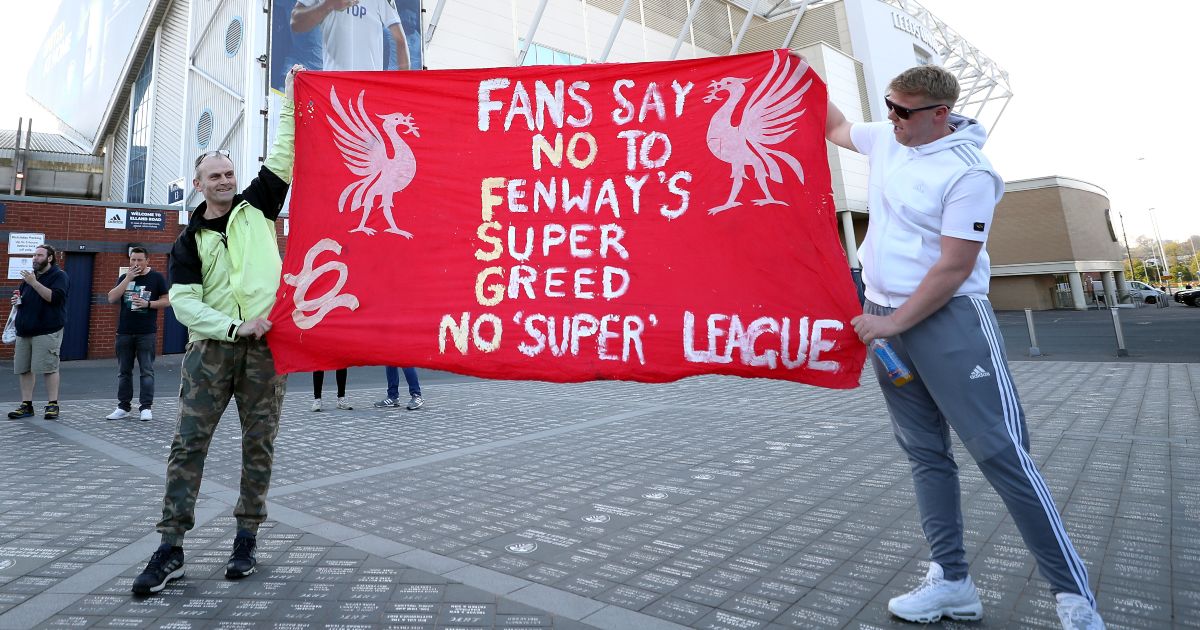 It’s time for legacy fans to choose: walk away from clubs that won’t notice you’re gone, or be guilty by association?

As ‘Legacy supporters’, for a long time many of us have strongly suspected that our worth to the clubs we follow falls somewhere between f*** all and slightly less. Many of us made our peace with it; some who couldn’t simply walked away. Others took the nuclear option of establishing their own clubs, and to them our hats are doffed.

But for those who remained, in whatever capacity, the bullishness persisted that without us, our teams would surely wither. Egged on by the empty platitudes of clubs missing gate receipts more than supporters in seats, the last year has only served to heighten that misplaced confidence, which has finally succumbed to death by a thousand cuts, with Sunday night’s unveiling of The Super League the final, fatal gash.

As many reflected on Monday, it’s not like we should not have seen this coming. A breakaway of sorts has felt inevitable, with the refusal to comprehend such a reality many a supporter’s sole coping mechanism.

But it is happening – at least the sh*tehawk six and a dirty half-dozen from Italy and Spain are trying to make it so – with the founder members finally dropping the facade that the bond between supporters, legacy or otherwise, and clubs is a two-way thing.

If you didn’t realise it before, Sunday night brought confirmation that the club you have loved for however many decades doesn’t give the shiniest of sh*ts about you.

As that reality bites, the question becomes now: what do we do about it?

ESL clubs focused on ‘fans of the future’ over ‘legacy fans’

One option is absolutely nothing. Which is tempting, since whatever action you take will barely register on the wavelength of the owners and executives responsible for this act of villainy. To those among us who refuse to waste time and energy fighting something in which you have been offered no say, go forth and do what makes you happy.

For the rest of us, it is decision time.

One of the most common reactions to Sunday’s news was ‘if this goes ahead, I’m done’. But it doesn’t matter if it goes ahead. It probably won’t. Have your pick of the many reasons why The Super League will never be more than a terrible idea dreamed up by the fattest cats desperate to gorge further still. Be they legal, practical, or because all of this was just a ruse to seize power from a different source, this God-awful ‘competition’ will surely never become a reality.

But it won’t be shelved because us, as fans, don’t want it. Our points have already been made loudly and in multiple forms, yet still the suits behind this monstrosity, which with three competing nations currently looks like the Anglo-Italian Cup on ‘roids, have no intention of listening. If they did, they would have asked one of the fans’ representative bodies who have condemned in unison the clubs they so blindly follow. But they didn’t because they knew what the response would be. And they care not one jot either way.

For many of us Legacies, this should be the final straw. Many times we have all briefly mooted the idea of walking away from our teams, perhaps after standing on a piss-wet open terrace to watch a miserable defeat, or maybe having felt the squeeze on our pockets once too often. But that appetite for separation never lasts. It rarely ever reaches the weaning stage.

Until now. The Big Six have given their supporters the perfect excuse to go cold turkey and that’s the only way to get yourself off the fandom drug, whether you’re an addict or a recreational user. There are other distractions if you open your eyes to them. Family, friends, other clubs, other pastimes… cigarettes and alcohol if you so wish. But now is the time to ‘just say no’ to the shameless six.

They cannot take back what they have done and the fact it has got this far, with goping logo and all, illustrates that they have no intention of doing so. So there is nothing to be gained from a ‘wait and see’ approach because while the outcome may change, the morals and driving principles of these club guardians will never waver.

In most cases, their primary objectives have never faltered since they entered their boardrooms for the first time. They have simply stopped the charade that football without fans is nothing.

Their game doesn’t need fans. Nor do their clubs.

According to source, some of those involved in ESL call traditional supporters of clubs “legacy fans” while they are focused instead on the “fans of the future” who want superstar names
*ESL insists modelling shows solidarity payments will be boosted £10bn Euros over 23 seasons)

So leave them to it. Let them fester in their own sweaty nest of cash and take another interest, even a temporary one. Separation need not be a permanent arrangement. In the unlikely event that the likes of the Glazers, Kroenkes, and FSG, all as stubborn as greedy, decide to abandon their cash cows and a fit custodian replaces them, then by all means, go back.

But at least for now, while us Legacies don’t register on their wavelength even as an inconvenience, we should not be complicit by association with these charlatans.