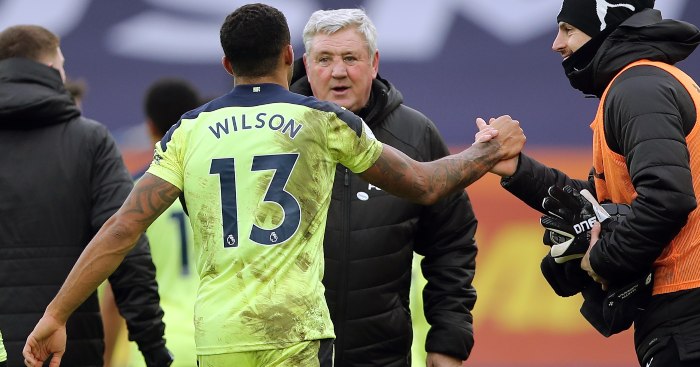 Newcastle fans and the North-East media may have given up on Steve Bruce, but his players certainly haven’t if their performance against Everton is any indication.

The visitors to Goodison Park earned their first win of 2021 by turning in their best performance of the season. One full of aggression, intensity and imagination – just some of the traits missing of late – all of which built the platform for Callum Wilson’s quality to seal a desperately-needed victory.

Throughout a wretched run which has seen Newcastle gather only two points from the last 27 available, one of the few unifying causes on Tyneside has been the drive for change in the dugout. Bruce has been fighting the same battle since he was appointed, but recent results and performances have led to reactions which have crossed a line in the view of the manager.

But when his players went over the white one at Goodison, all 13 used by Bruce proved their willingness to fight the manager’s cause. Wilson was unquestionably the best of a very impressive, determined bunch.

Wilson’s recent form had mirrored his side’s struggles. The 28-year-old had failed to score and offered only one assist in his last six appearances, while Newcastle had not netted at all in their last six on the road. All told, it was 11 games without a win, which would have been cause for alarm for many more secure managers than Bruce, but Wilson and his team-mates appeared desperate to bring the Toon boss some respite.

The centre-forward looked sharp from the outset, providing an outlet in front of Yerry Mina and Michael Keane, or running into the channels either side of the Everton centre-backs. Wilson and Mina’s battle carried over from Newcastle’s win over Everton at St James’ Park in November, but the closest the Toffees defender could get to laying a finger on Wilson was a late nipple twist off the ball while the hosts exhibited their frustration at the Magpies’ resilience and their own slipping standards.

To highlight Wilson’s willingness to show for his team-mates, of all the Newcastle players, only Javier Manquillo had more touches of the ball. The tally of 56 was 19 more than his previous highest this season, and only once in the past eight games has he managed more than half of today’s total.

Six of those touches came in the form of shots – again a season high. Not since the opening day has he recorded more than half the number of his efforts on Jordan Pickford’s goal.

Reflecting upon that, Wilson expressed his disappointment not to have taken home the matchball. He came closer than anyone to breaking the deadlock in the first half with a header that prompted a wonderful reflex save from Pickford. Wilson was wasteful with a side-footed effort early in the second half when played in by Ryan Fraser, but when he atoned in the 73rd minute by summoning all the strength his neck muscles could muster to head Jonjo Shelvey’s corner beyond Pickford.

The swivel, the power, the precision. All superb from Callum Wilson 🙌

A BIG goal for the Toon Army! pic.twitter.com/LoQen5ux4H

It was the second occasion Wilson had profited from the space around Richarlison at a set-piece, with Everton’s defence seemingly preoccupied with covering their zones more than attacking the ball. It summed up the hosts’ muddled thinking throughout, with Dominic Calvert-Lewin starved of the kind of service Wilson was feasting upon, laid on by Shelvey, Fraser and the effervescent Miguel Almiron. In the battle to serve as back-up for Harry Kane at the European Championship, Wilson certainly won this round.

He was gifted all the time he needed to double his tally in added time, with Newcastle countering at break-neck speed following an Everton corner. Even in the absence of recovering defenders, though, the Magpies’ lightning-fast movement through Allan Saint-Maximin and Jamal Lewis was a sight for Geordies watching at home as novel as it was welcome.

That will be frustration for Newcastle fans. If the players do retain the kind of belief in Bruce that has sapped away from the supporters, then why leave it so long to show it in their performance?

Just over a fortnight ago, Bruce described his side’s performance at Sheffield United as ‘absolutely sh*te’ – he was being kind – and Wilson acknowledged immediately after this game that he and his team-mates ‘needed to pull their fingers out’. Having belatedly done just that, the pressure is on to maintain this level.  Starting with the visit of Crystal Palace on Tuesday.

In the meantime, Bruce will probably be more willing to interact with the local media than he has been this week. The manager cut their access having felt that their coverage had strayed beyond criticism towards ridicule.

The papers should certainly make for a more pleasant read tomorrow morning, but one victory isn’t enough to sway many on Tyneside, if they can be swayed at all. This is a very positive start to a turnaround a form, but it is to be just that: the foundation for a much-improved second half of the season.