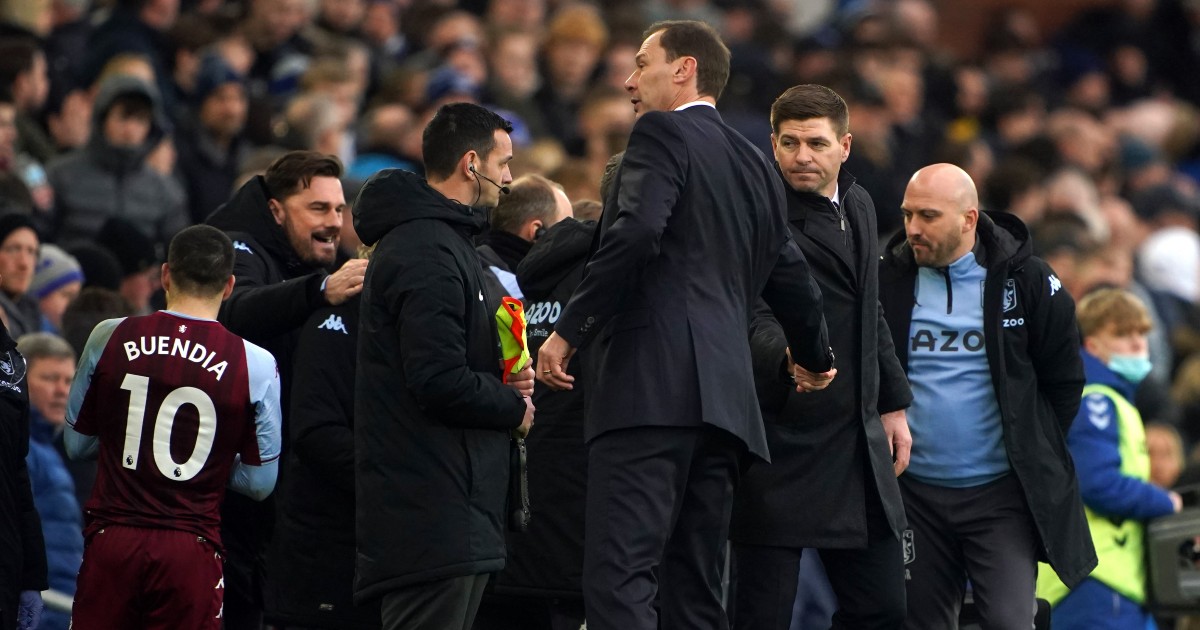 The defeat to Aston Villa and Steven Gerrard emphasised how cataclysmically bad Everton have been off the pitch in January, never mind on it.

There might never be a definitive answer as to which of Frank Lampard or Steven Gerrard should sit, but early 2022 has already provided compelling proof as to who can withstand the irresistible force of Duncan Ferguson’s caretaker management.

Ferguson’s fifth match in temporary charge of Everton did not follow the same trajectory as the first four. When Marco Silva was fired in December 2019, the Scot transformed the Goodison Park mood. He lifted them, reconnecting the supporters with their disjoined team and coaxing – scaring – performances to be proud of from an uninspired squad. Ferguson secured draws against Manchester United and Arsenal that were epitomised by fight, resolve and commitment, only suffering Carabao Cup quarter-final defeat to Leicester on penalties. But it all started with a 3-1 home victory over Lampard’s Chelsea that delivered the demanded “blood and thunder” with every sinew.

Everton made 37 tackles in that match; Chelsea were, frankly, bullied, swept away by the naive but powerful promise of a Toffees revolution. The law of diminishing returns combined with two years of lamentable, directionless mismanagement meant Gerrard and Villa could ride the wave fairly comfortably on Saturday.

The hosts were improved. That much should be said but also means little, considering how low Rafael Benitez left the bar before his departure. Everton neither cowered nor imploded. They threatened but any time they manoeuvred into a shooting position it was blocked. The visitors navigated a late barrage well. There were things that either Ferguson or his permanent replacement can build on and work with.

"I thought in the second half the boys gave everything, to be honest with you."

Duncan Ferguson was proud of Everton's display this afternoon, despite coming up short.

Anthony Gordon, for example, almost changed the game completely. Introduced with little more than half an hour to go, the 20-year-old created the most chances of any player for either side and one ball in particular for Dominic Calvert-Lewin was tantalising. The forward summed up Everton’s afternoon when he could not quite apply the appropriate finishing touch.

Ferguson also brought on Tyler Onyango for the teenager’s first ever non-stoppage-time Premier League appearance as he ticked the most important caretaker manager box: give the youth a chance. The selection of Jonjoe Kenny was less understandable and not something many will recommend is repeated.

That helped expose a series of atrocious decisions that leave Everton in a genuine scrap for survival. They have signed three players for more than £30m this month, but none of left-back Vitaliy Mykolenko, right-back Nathan Patterson nor forward Anwar El Ghazi were in the squad. In terms of El Ghazi there was at least a valid explanation as he couldn’t face his parent club, but Mykolenko was seen in the travelling party and Patterson joined in the first week of January.

Each of those players were signed by Benitez, whose final act of player trading was to necessitate and sanction the sale of Lucas Digne. The Frenchman finally recorded his first assist of the Premier League season with a perfect corner for Emiliano Buendia’s exquisite front-post flick on the stroke of half-time.

The celebrations for that winning goal were cut short when a projectile thrown from the crowd struck two Villa players. Post-match discussion will inevitably include cute lines about showing more ‘bottle’ but this was down to quality, preparation, focus and fortune. Everton lacked luck as much as concentration or ability.

That is where Villa excelled. While no Everton player seemed capable of managing consecutive touches of the ball at points, particularly in midfield, Jacob Ramsey was brilliant. There was more cohesion in their general play, which is to be expected, but it was striking how uninhibited they looked in comparison to their hosts at times.

By the end there were no Goodison boos; it was neither a display nor really a result that deserved that sort of reaction. Yet this might have been one more necessary and painful result for Everton, who are slipping further into a relegation battle. They are 16th with a record of 0.95 points per game. Villa were 16th on 0.91 points per game when they were accused in some quarters of bringing in Gerrard and dispensing with Dean Smith too soon. The right decision can never come quickly enough but Everton ought to be wary that it absolutely can be left too late.