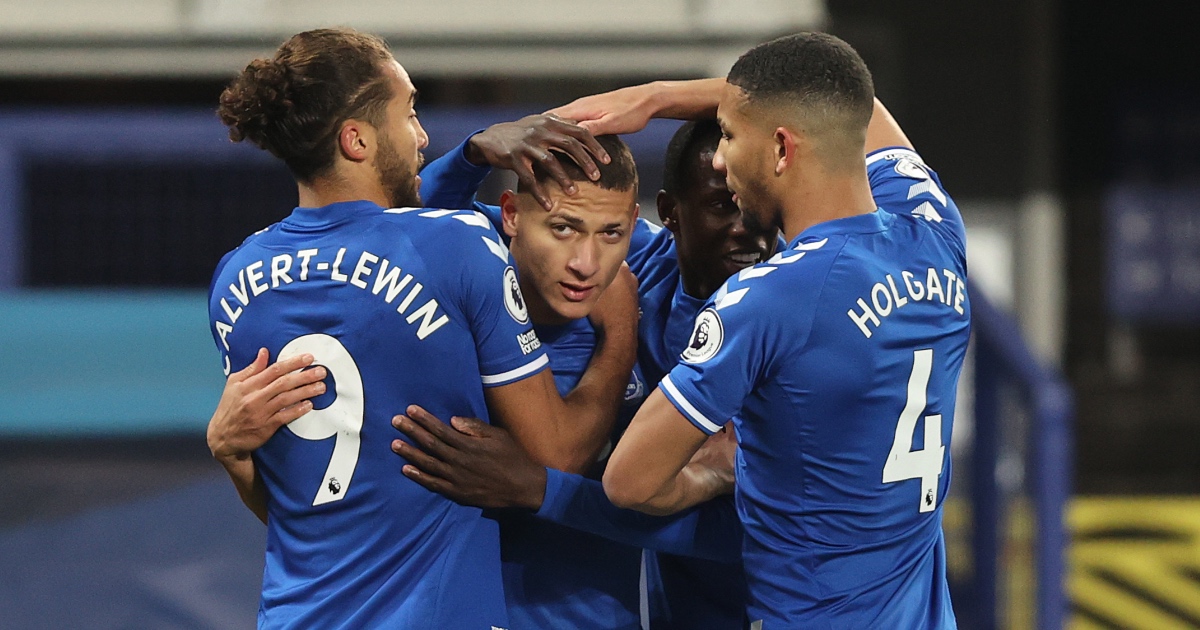 On October 17, after a 2-2 draw against Liverpool extended their unbeaten run at the top of the Premier League to five games, the question was posed: Can Everton win this open title race?

Manchester City’s dominance has turned a fair question into a comically flawed one – this could yet be the most one-sided Premier League title ‘race’ in history. But ignoring City’s ludicrousness, just as we were forced to do amid Liverpool’s superiority last season, Everton aren’t far short of the best of the rest. But what (or who) are they short of?

The 4-2-3-1 formation chosen is simply a means to illustrate the current depth of the Everton squad, rather than an indication of how Carlo Ancelotti sets them up, which changes game by game.

In Michael Keane, Yerry Mina, Ben Godfrey and Mason Holgate, Ancelotti has arguably the best centre-back options in the Premier League (again, we’re ignoring Man City). You could make a case for any three of the Englishmen being included in Gareth Southgate’s squad this summer. Keane and Holgate have both improved dramatically under Ancelotti and Godfrey has had an excellent first season.

So too have Allan and Abdoulaye Doucoure, who were partnered in midfield for the first time since the start of December against Southampton on Monday, with the former providing a solidity the latter has missed alongside him. That said, Tom Davies in particular has impressed in his absence and is a more than able back-up option.

Lucas Digne has a left foot worthy of wand status, which when combined with Dominic Calvert-Lewin’s six-yard box menace and their towering presence in general from set-pieces, makes them a huge threat from a left side which also boasts the power and skill of Richarlison, who expertly rounded Fraser Forster to smash home the winner on Monday.

In James Rodriguez they have a world-class roaming playmaker and Gylfi Sugurdsson is another Everton player who’s benefited hugely from the arrival of Ancelotti, evidenced again on Monday with a beautiful first touch and perfectly weighted through ball to assist Richarlison.

It’s the right side that needs attention. Seamus Coleman – one of the best pound for pound signings in Premier League history – is now 32 and Digne’s unerring quality from the other side has served to highlight the club captain’s relative inadequacy. And Alex Iwobi is a half-decent substitute, but no more than that. It’s no surprise that 40% of Everton’s attacks come down the left, with just 32% from the right. Splitting that threat more evenly has got to be a summer priority.

Jordan Pickford is not such a cause for concern as he was a couple of months ago; he made a couple of typically quick, smothering stops to keep a clean sheet on Monday. But he also flapped at virtually every corner that came into the box; he just doesn’t breed the confidence required of a top-class goalkeeper. Alisson, Ederson, Thibaut Courtois and Kasper Schmeichel as the last four title-winning goalkeepers illustrate the need for an upgrade perfectly.

Some of you may be questioning whether Calvert-Lewin is a good enough striker, and although 13 goals is an impressive return, the nature of those goals – all in the six-yard box or just outside – can viably be used as an example of his limitations as well as his improvement under Ancelotti. But a Richarlison-type signing could not only fill the hole on the right, but also provide another option to play in Calvert-Lewin’s stead (not that it’s likely that will be necessary given the striker’s trajectory of improvement).

Three players then: a right-back; a right-sided attacker; a goalkeeper. And given Everton’s outstanding transfer business last summer, there’s no reason to doubt they’ll sign the right options again this time around, from a pool which could be much wider should they qualify for the Champions League.

If they do and barring repeated ridiculous dominance of the Premier League again next season, Everton could challenge for the title. Wouldn’t that be something.