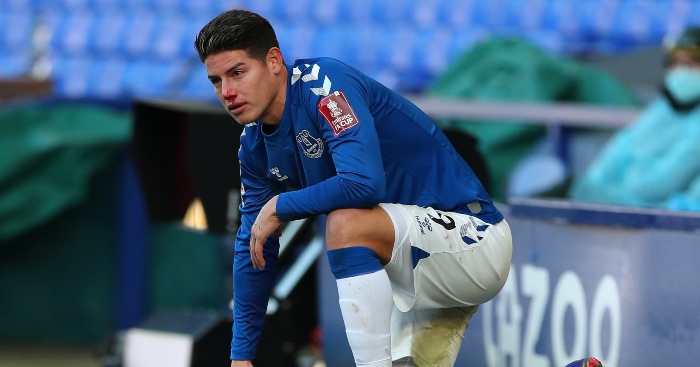 The return of Lucas Digne and James Rodriguez from injury meant the weakening suggested by eight changes from Everton’s last Premier League outing was more a perception than a reality. This was a team of eight internationals and three England youth team stars. This should have been easier.

Rodriguez looked ominous whenever Everton had any spell of possession. He dropped deep, went wide and found space – in his typical style – by not moving very much. There is a lovely lack of sh*ts, similar to those given by Lionel Messi when Barcelona don’t have the ball. His ‘running is for paupers’ mentality is a problem for the team a lot of the time, but his use of the ball is innovative and direct, and the good moments Everton had generally passed through him.

Not so for the opener though. It was the Apprentice Anthony Gordon rather than the Master who spun away from a challenge in midfield to play a perfectly weighted through ball for Cenk Tosun, who with almost his first touch on his first start of the season, dinked the ball beautifully over the onrushing Jamal Blackman. It looked – at that stage – like Everton would dish out a mauling. They were ‘at it’.

That of course should be a given, but has often not been the case in FA Cup, with Oldham, Shrewsbury, Tranmere and Reading among their early round conquerors since they last won the competition in 1994-95. They’ve not got past the third round in three of the last four seasons and were dumped out in the fourth by Millwall in the other.

And Rotherham soon found Everton’s soft underbelly, with Matthew Olosunde doing much of the tickling down Digne’s flank. The American right-back – signed from New York Red Bulls by Manchester United in 2016 before a free transfer to Rotherham last summer – is very, very quick, determined and very, very quick.

He beat Digne at will throughout the game. An excellent defensive full-back would have struggled, let alone one whose best assets are all in attack, given no support whatsoever by his teammates. Brilliant though Gordon’s role in Everton’s goal was, he had to provide more support to the ailing defender. He and Digne were both replaced in a raft of second half changes, but not before Olosunde had punished their negligence.

Rotherham’s six-foot-plenty striker, Michael Smith – prime purveyor of Everton players ‘not liking it up ’em’ – found Olusunde with the aid of two ricochets, and the 22-year-old slipped the ball under Robin Olsen to draw The Millers level. It was very well deserved.

Despite Yerry Mina, Gylfi Sugurdsson, Abdoulaye Doucoure and Bernard all being introduced midway through the second half, it was Rotherham winning second balls, putting pressure on the Everton defence and testing the goalkeeper, as was the case for the majority of the game.

But while an Everton win in normal time – which would have come to pass were it not for one of Tosun’s thinning head hairs being ruled offside – would have been undeserved, they turned up the heat in extra time and were well worth their victory in the end.

Tosun spurned a further couple of half chances, Bernard hit the post and Rotherham looked a bit knackered. It was left to Rodriguez to provide that bit of quality on the half-turn as he spotted Doucoure surging through the middle and laid the ball alongside the Frenchman, who calmly passed in the winner.

Everton escaped rather than cruised into the fourth round: bloodied, bruised but still in it. They did reveal that soft underbelly, but covered it before Rotherham’s tickles could result in pissy shorts and another lame domestic cup exit.