Home Everton Everton are sliding towards a relegation fight… 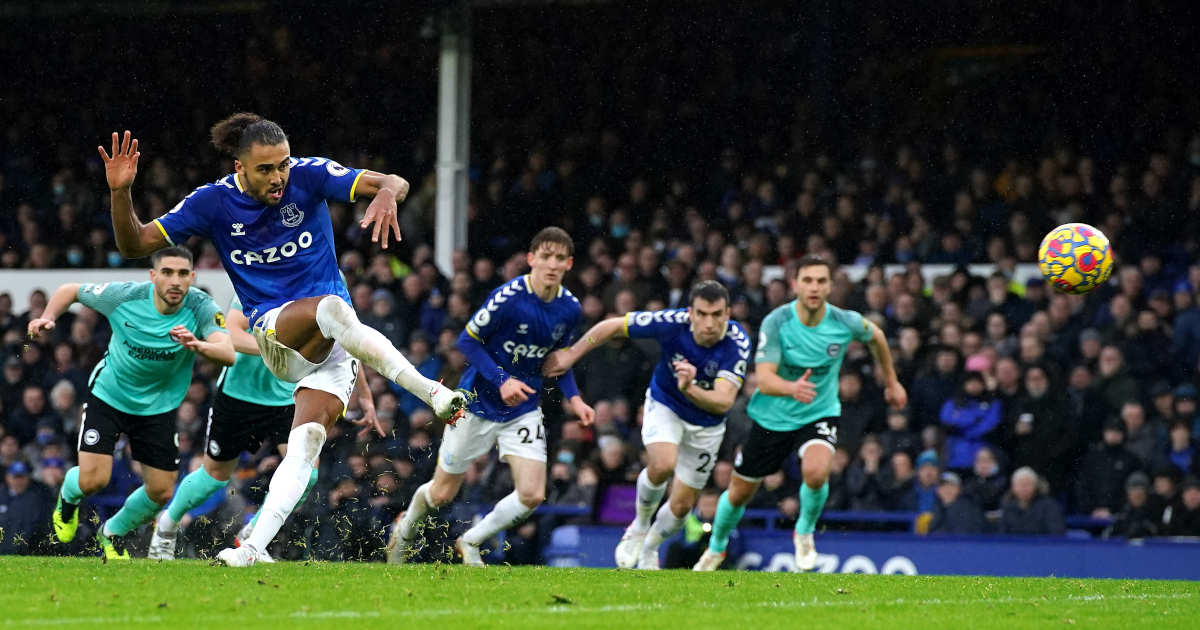 Everton have only won once in twelve games, the manager has no shrift left, and the man being touted as his replacement would be a big gamble.

That old familiar noise started ringing around Goodison Park well before the final whistle. When Alexis Mac Allister’s long range shot crashed into the roof of the Everton goal to give Brighton a 3-1 lead in the home side’s first match of 2022, the booing started almost immediately, even though there were still twenty minutes of the match still to play. They pulled a goal back five minutes later but, as has been the case for much of the last three months, it was all too little too late.

Everton had lost again, the boos rang out even louder at the final whistle, and in the post-match wreckage few could have too many complaints about the result. One of their two goals had taken a huge deflection to get there and while they might have taken a point from the game, had Dominic Calvert-Lewin not blasted a second half penalty kick over the goal a two week break brought about by Covid-19 cancellations didn’t seem to leave the players looking very fresh. Unlike at other Premier League matches over the Christmas and New Year period, there was no Illuminati-inspired conspiracy going on at Goodison Park. Everton just weren’t very good.

The booing was so loud at the final whistle because this wasn’t the first time that Everton have played like this recently. They’ve now won one of their last twelve Premier League matches, a run that stretches back to the end of September, and there is little to indicate that anything is going to improve, right now. This run has dropped them to 15th place in the table, and they’re only one above the relegation places in the Premier League form table as well, which seems to bear out the growing belief that if Everton are to avoid relegation come the end of this season, it will be because there were three worse Premier League teams this season rather than because of anything postive that Everton themselves might have done.

As ever, when a run of results stretches back like this, all eyes come to focus on the manager, and in the case of Everton the manager is uniquely placed to not be able to ride out a storm like this. As time progresses and the mist lifts, it’s increasingly possible to see what a bizarre appointment Rafael Benitez was as the manager of this specific club. Not only was he the former Liverpool manager with whom he’d won the Champions League a very, very long time ago, but he’d also made disparaging comments about Everton while there. An apparent falling out with Lucas Digne hasn’t helped the growing view that Benitez is simply a bad fit.

On top of that, Everton’s recent history of performance art levels of profligacy in the transfer market has left little to continue the club’s recent transfer policy of throwing as much of it at the wall as possible in the hope that some of it might stick. Everton’s recent habit of bringing in a new manager and then giving them £100m to spend and nine months to get results right before sacking them doesn’t seem to have worked out.

The squad now looks uncoordinated and flabby, the obvious conclusion of having had five very different managers over the last five and a half years. Well-meaning plan has been layered on top of well-meaning plan, but all of these plans have been administered so badly that it’s impossible now to see what the original drawings looked like or what is trying to be achieved now.

In the Hollywood script version of this story, there is a hero waiting in the wings, a hometown teenage starlet who went away to win everything that club football has to offer and has been sharpening his managerial credentials at a club that has been an even greater financial basketcase than Everton in recent years. But if Everton were to decide that The Benitez Chapter needs to be closed soon, would Wayne Rooney even want the thankless task of trying to steady this ship at this time?

He’d make perfect sense as the club’s next manager should they be relegated from the Premier League – he has plenty of Championship experience, after all – but bringing him in before the end of this season might look like an act of desperation that he might not, without any Premier League managerial experience, be able to right. It’s not difficult to imagine Rooney being brought in on a wave of sentimentality to ‘save’ the club, only for him to find that the club’s problems run considerably deeper than any one manager can resolve in just a few months.

Everton were last relegated from the top flight in 1951 (since the formation of the Football League in 1888, they’ve only spent four seasons below the top tier), and there is a sense of alarm that the club is heading back towards the relegation positions. Anyone who can remember the close shaves of 1994 and 1998 will be more than aware that even the sense of relief that comes with surviving such a battle is hardly the worth the panic that precedes it. Everton sit eight points above the relegation places at the start of the new year, but even a gap of this size can be whittled down to next to nothing in just a couple of weeks, and there’s been little in recent weeks to indicate that this particular Everton squad is in any way mentally prepared for such a scrap.

Rafael Benitez might be a symptom rather than a cause of Everton’s current issues, but the costs of relegation are sky high, and it’s difficult to believe that he will survive much longer unless results start to significantly improve. There’s a banana skin coming up in full view at Hull City in the FA Cup, and games against Norwich and Newcastle on the 15th January and the 8th February. Should they fail to win the former it seems unlikely that Benitez will be there for the latter. But Everton’s unique conflation of poor performance on the pitch and even worse financial stewardship in the boardroom makes even a post-Benitez future difficult to predict. We probably haven’t heard the last of the Goodison Park boos this season.