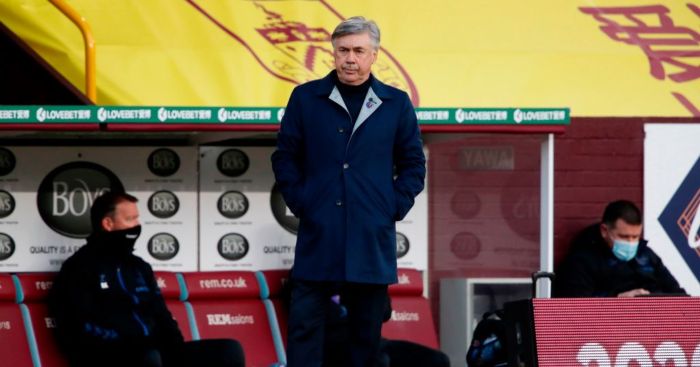 Everton came from a goal down to draw 1-1 against Burnley at Turf Moor on Saturday. The result was not disastrous for the Toffees but their worrying defensive record must improve soon.

The Toffees started the season with seven successive victories in all competitions, including four in the Premier League. Carlo Ancelotti’s men were top of the league table after matchday five and six but their ascent has been just as dramatic. Ahead of Saturday’s fixture against Burnley, Everton had picked up three points from an available 15 in their last five Premier League matches. Their controversial 2-2 draw against Liverpool in the Merseyside derby was followed up by losses against Southampton, Newcastle United, Manchester United and Leeds United.

It only took Everton two minutes to fall behind again here as Robbie Brady’s brilliant right-footed effort from 25 yards zipped past Jordan Pickford. It was only Burnley’s fifth Premier League goal of the season and the Republic of Ireland international’s first in over a year, last netting against Manchester City at the end of 2019. Only Sheffield United (13) are now on a longer run without a shutout in the Premier League than Everton, with the Merseysiders now conceding in each of their last ten games in the competition. Equally the goal will have come as a relief to Burnley, with only rock-bottom Blades scoring fewer goals than Sean Dyche’s outfit.

5 – Jordan Pickford has conceded more goals from outside the box than any other goalkeeper in the Premier League this season (5), including two in his last two appearances. Target. pic.twitter.com/DS0DFeAVw1

Everton bankrolled a summer of spending with Allan, Abdoulaye Doucoure and James Rodriguez all signing ahead of the new campaign. Ancelotti played three at the back from the start against Burnley with Allan, especially, looking uncharacteristically off the pace, slack in possession and giving the ball away with a number of poor touches. On a couple of occasions Rodriguez chose the wrong pass too and it was a trait of Everton’s early attacking play, with better options available. It was completely different to the Toffees early-season style and form. The players seemed too far apart when earlier in the campaign they would have been closer together, flicking it off to each other in tight triangles. More importantly, they were giving the ball away far too easily.

Then on 26 minutes the match changed in Everton’s favour but in unfortunate circumstances. Fabian Delph had to leave the field after he pulled his hamstring, leading to the Toffees moving to a back four, with Ben Godfrey and Alex Iwobi moving into the full-back positions. Andre Gomes came on for the departing Delph and the change provided much more balance to Ancelotti’s side, who went on to score before the break. Allan, who improved towards the end of the half, nicked the ball in midfield and played Richarlison in down the left. The Brazilian then fed a lovely ball across the face of goal and Dominic Calvert-Lewin was on the end of it to grab his 11th goal of the league season.

11 – Dominic Calvert-Lewin has scored more goals from inside the box than any other player in the top five European leagues this season. Textbook. pic.twitter.com/y9IvlHvJel

Both sides will have been disappointed not to have won the match in the second half. But at least it didn’t extend an unwanted record for the Toffees, with Everton having suffered the most Premier League defeats at Turf Moor by a visiting side, while they still haven’t kept a clean sheet there since March 1958. Only Fulham have conceded more goals than Everton this campaign and Ancelotti will have to shore up that defence soon if they are to stay in touching distance at the top. Realistically, Everton’s aim before the season would have been a top-six finish and the point at Turf Moor puts Ancelotti’s men into seventh, just one point off fourth-placed Leicester City.

Just a couple more positive results amongst their recent losses could’ve seen Everton looking down rather than up the table, with their next three fixtures against Chelsea, Leicester and Arsenal. Everton can certainly start heading in the right direction again but only if they can put an end to their defensive fragility, which even existed with the injured Seamus Coleman and Lucas Digne in the side. The difference being that the pair, especially Digne, added so much to their attacking play. Ancelotti must get the balance right again quickly or they could soon extend their terrible run of form.