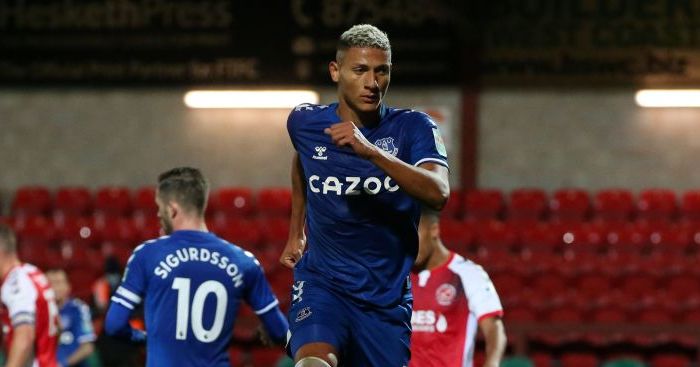 A great deal has changed since Richarlison last faced third-tier opposition in the League Cup. Everton have swapped Marco Silva for Carlo Ancelotti, traded up from midfield options of Morgan Schneiderlin, Tom Davies and Fabian Delph to Allan and Abdoulaye Doucoure, and Dominic Calvert-Lewin has established himself as one of the most effective, well-rounded strikers in the Premier League in 12 transformative months.

Some Colombian fella with immaculate skin and an aversion to sprinting now resides at Goodison Park too, although no-one seems to have noticed.

Richarlison is also no longer innocently inviting mockery and cheap shots on social media by celebrating late goals in 4-2 wins over a League One team in the second round of a cup competition that probably shouldn’t be taking place by channelling Lionel Messi and holding his shirt aloft to a backdrop of delighted confusion.

His strikes at Fleetwood – a well-placed header and some fine combination play with Alex Iwobi culminating in a clever finish – were taken in stride by a player at seemingly constant full sprint. Richarlison has burst out of the blocks this season as the third wheel in an exciting Everton attack.

It seems an age since their decision to reject an £85m offer from Barcelona was ridiculed far and wide. Both clubs soon dismissed the speculation as idle January transfer gossip but it was the sort of story that sticks. He will forever be the player Barcelona valued at close to nine figures for some. Others might always see him as a forward Everton inexplicably rated even higher.

The disbelieving conversations are not difficult to imagine. Remember when someone bid £85m for Richarlison? And when Everton turned it down?

The context – of a 22-year-old signed for a transfer window-spoiling £50m or so, having extended his contract by five years the previous month after proving his undoubted talent and versatility – was readily ignored by those eager only to poke fun at both the buyer and the seller.

The player, meanwhile, continues to develop quite nicely; how Barca could do with him now. Richarlison has added consistency to his more obvious traits, both in terms of the raw numbers – 13 league goals in consecutive seasons – and just as a more general, constant presence in matches. He has become an asset at both ends for a team finally able to share a burden he has long been expected to carry alone.

Richarlison in the 20/21 Premier League so far:

Most fouled (8)
Most tackles without being dribbled past once (7)
Second most shots (12, behind Mo Salah)
Second most successful dribbles (13/14, behind Adama Traore's 14/18)
Second most assists (2)

Jack and master of all trades.

Only Teemu Pukki (53.8%), Danny Ings (47.1%), Raul Jimenez (45.1%), Pierre-Emerick Aubameyang (44.6%), Jamie Vardy (41.8%) and Marcus Rashford (37.9%) either scored or assisted more of their team’s Premier League goals in 2019/20 than Richarlison (36.4%). They each share one thing in common, with the exception of perhaps Pukki: their respective clubs would value them much higher than most potential suitors would be willing to pay, and more than most neutrals would consider fair.

Some on the outside may rate Ings or Jimenez as £40m-£60m strikers. To Southampton and Wolves they are important enough, so difficult to replace, that they are almost priceless. The same stands for Richarlison, who only continues to get better with time and patience.

The Brazilian has quietly scored more often for Everton than Wayne Rooney and already has as many assists as he managed in the entirety of 2018/19, with one more needed to match last campaign’s total.

Richarlison progressed as much as he could as an individual over two testing years at Goodison Park. The final step was to improve the players around him and wait for nature to take its course. Neither he nor Everton could have expected it to work so well so soon. His evolution into a more mature, adaptable and multi-faceted threat has been one of the most impressive of all, considering the £85m joke he had become for some.