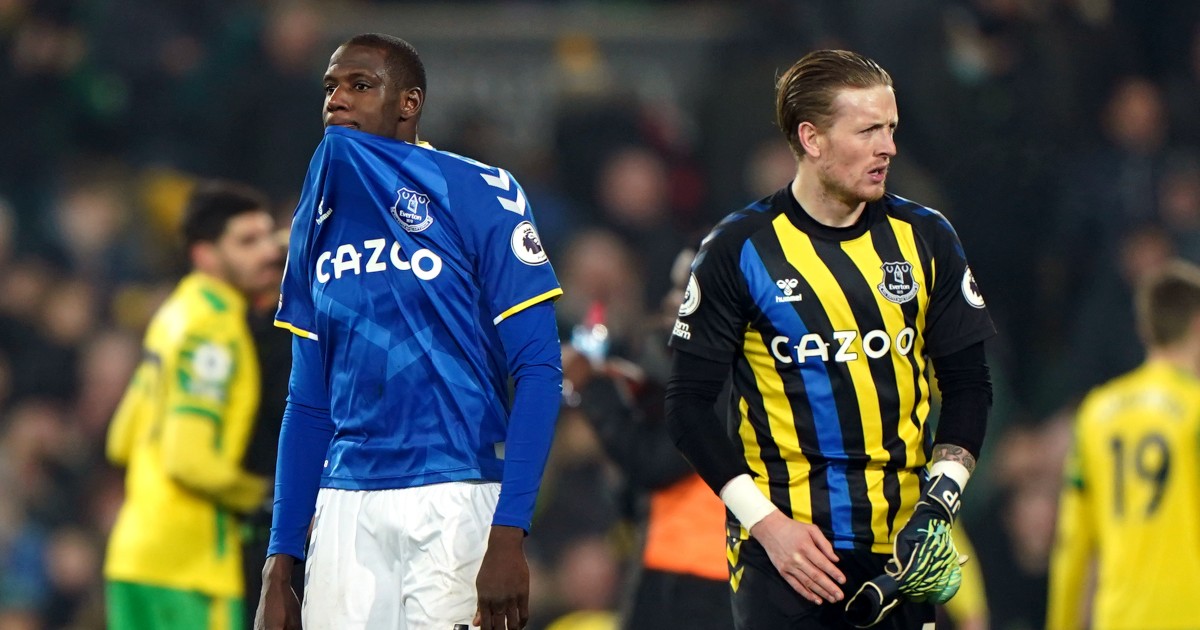 The end is nigh for Rafael Benitez at Everton. Where Farhad Moshiri goes from there is unclear but losing to Norwich makes this untenable.

A little over 40 days have passed since Marcel Brands left Everton despite being “convinced that there is enough quality to improve the current situation quickly”. His last example of foresight and prescience typified the Dutchman’s reign as director of football: the Toffees have won one and lost three of their five Premier League games since, while stumbling past Championship opposition after extra-time in the FA Cup third round.

It is a run, stretched to one victory in 13 league matches with defeat at Norwich, that has dragged Everton into genuine relegation trouble. They sit 15th with 19 points from as many games, six from danger. Bournemouth were a place lower but a point better off at the same stage when they went down in 2019/20.

The introspection and reform that was hinted at in December cannot come soon enough. Everton come across as a baffling basketcase in the boardroom with a misfit muddle in the managerial dugout and a shambling squad. Their month-old promise of a self-led ‘strategic review of the football structure’ should inspire as much hope of genuine self-assessment, serious soul-searching, actual meaningful reflection and a progressive future as an investigation into ministerial conduct held by a senior civil servant who reports her findings to that very same government. There were no parties, much as there is no strategy or football structure.

As for the pledge of ‘full support’ for Rafael Benitez, it seemed fanciful at the time, after a Merseyside derby thrashing, and positively deluded now.

Everton have played worse than this but rarely better. There were bright sparks at Carrow Road, particularly down the left-hand side – although it is fitting that their brightest spark is Gray by name, if not nature.

He and substitutes Richarlison and Yerry Mina are alone in emerging from this latest wreckage with reputations intact. The Brazilian provided brief optimism with a delightful overhead kick and the Colombian vaguely threatened from set-pieces. But the rest ranged from ineffective to plain awful. Those Goodison boos were still just about audible in the away end at full-time, not quite drowned out by the elation of a first Canaries win since November.

Norwich were solid, took their two best chances and defended well, but Everton simply did not test them. Dominic Calvert-Lewin was anonymous yet somehow entirely more noticeable than the lumbering Salomon Rondon. Anthony Gordon offered nothing on the right, losing his battle against Brandon Williams by technical knockout. Abdoulaye Doucoure and Andre Gomes provided little impetus at either end.

Jordan Pickford was once more the calmest member of a defence that has kept fewer clean sheets than any Premier League club bar Newcastle. Michael Keane stabbed a Josh Sargent cross past his own keeper under no pressure. Ben Godfrey had a 24th birthday to forget as much as Vitaliy Mykolenko’s debut. Seamus Coleman’s careless pass led to Norwich’s second and it was a damning indictment of his captaincy to be removed at two goals down after 54 minutes.

Benitez and his players had no answer to the scoreline changing from 0-0 to 2-0 in 92 seconds. Everton had as many shots as Norwich from the 19th minute and the Canaries carved out the better chances. It is to their credit that they seemed relatively comfortable protecting that lead.

But it is also to Everton’s condemnation. Norwich had lost their last six league games without scoring. Norwich had been written off as relegation certainties. Norwich have had a two-goal lead at any point in just three of their last 53 Premier League games; two of those came against a Toffees side, with different Real Madrid managers each time. It is a preposterous situation Farhad Moshiri finds himself in. After sacking Sam Allardyce for finishing 8th in 2018, the similarly archaic Benitez has already outlasted any sense of loyalty and patience. The findings of this ‘strategic review of the football structure’ should expose many failings, not least his. And that must be worrying for an owner that has tried experience, freshness, DNA and everything in between as the eternal search for coaching inspiration at Everton continues.