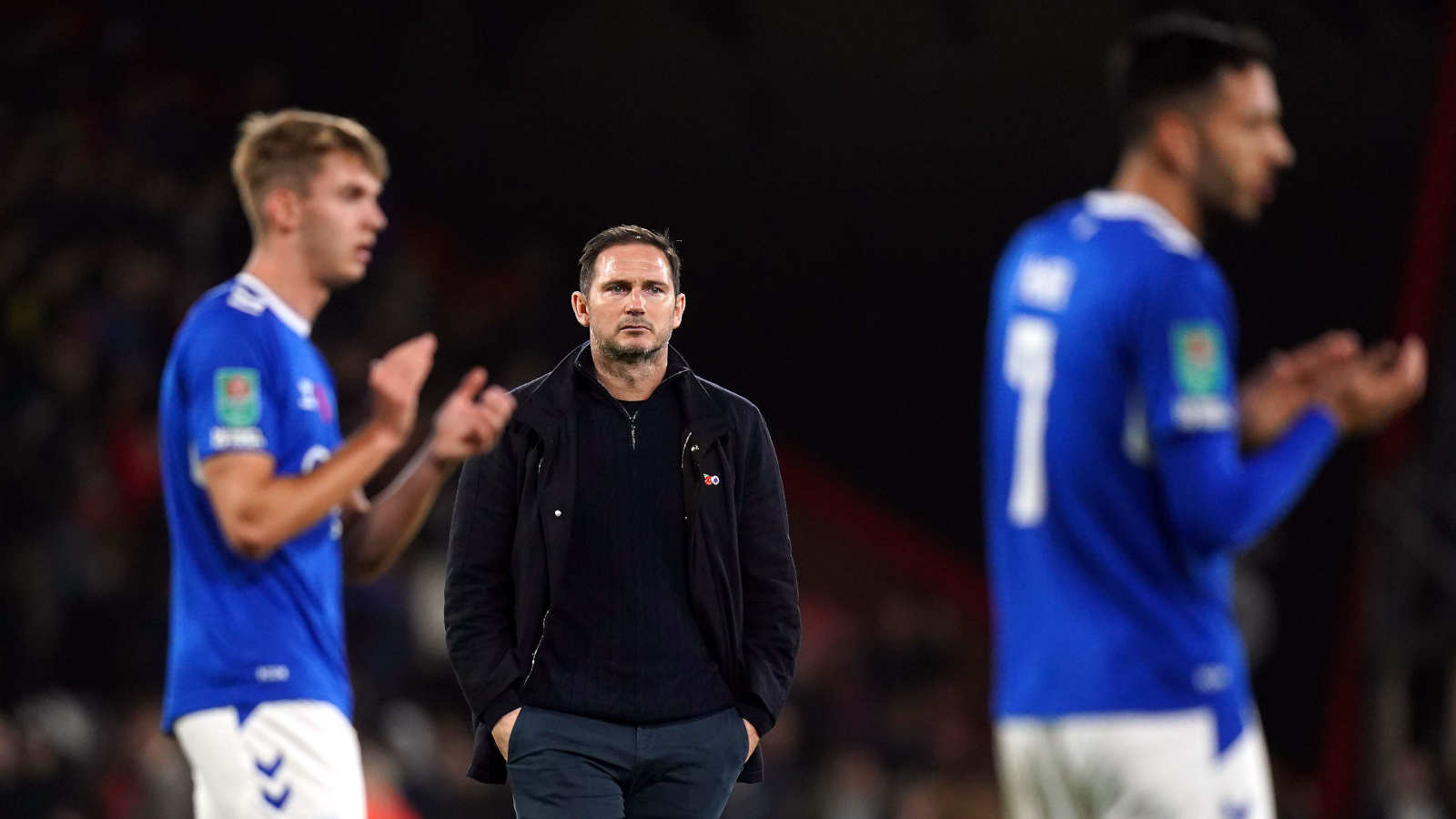 For Everton supporters of a certain disposition, it was a wearyingly familiar afternoon at the Vitality Stadium. A disjointed performance and a thorough beating at the hands of Bournemouth – their second in five days, having been trounced in the EFL Cup just five days earlier – was followed by tangible anger from travelling supporters who’d made their way down to the Dorset coast, all of which means Frank Lampard is among the Premier League managers for whom the enforced World Cup break couldn’t have come a moment too soon.

Their 4-1 defeat in the EFL Cup had been bad enough. Lampard may have chosen to change all 11 of his team from their previous game against Leicester, but the fig-leaf that this may have offered him was stripped away by the fact that Bournemouth made nine changes to their team too. Furthermore, it’s not unreasonable for Everton supporters to take the viewpoint that perhaps a club of their size which hasn’t won a major trophy in 27 years should be taking any chance at silverware a little more seriously.

But to return to the same venue for another pre-Christmas stuffing was unforgivable. Everton have now lost five of their last seven games and in a tightly congested bottom half of the Premier League this defeat was enough to drop them back to 17th place in the table, where they will now hover uncomfortably until Boxing Day. They will end 2022 pretty damned close to where they began it.

It’s not as though they’ve been terrible this season. Three of those five defeats came against Spurs, Newcastle and Manchester United, while their home defeat against Leicester City came against a team that has transformed its fortunes over the last few weeks and which currently sits in third place in the Premier League’s form table.

But their second trip to the Vitality Stadium in less than a week can’t really be sugar-coated. Defensively profligate and littered with individual mistakes, this was one of those defeats that didn’t only look crushing on the basis of the final score. The nature of the performance left so much to be desired that there were practically no positives to be taken. Supporters will usually accept a result if their team has been a little unlucky or otherwise shown some gumption.

It’s the combination of performance and result that left the travelling faithful so viscerally angry, and it re-raises familiar questions concerning the ongoing top-flight status of a club that hasn’t been relegated in more than 70 years. And that feeling of unease will have been compounded by the fact that this latest defeat was the second in a row against relatively modest opposition, a team which had lost their previous four consecutive Premier League matches.

And there may well be even greater frustration because those same travelling supporters already know that this team is capable of so much more. A poor start to the season had left them in the relegation places after four games, but then came a series of performances which hinted at some degree of steady improvement which culminated in a 3-0 home win against Crystal Palace in which everything seemed to coalesce positively for Lampard.

This, it seemed, was the sort of result and performance that he wanted, the true arrival of a corner that had been turned. A subsequent goalless draw at Fulham seemed to indicate that coach Ashley Cole has built a little defensive backbone into the team, even if they couldn’t emerge from west London with all three points. Progress can come in large steps or small, but much of that seems to now have been undone by Bournemouth’s double.

So where does Frank Lampard go from here? And perhaps more pertinently, where does owner Farhad Moshiri go from here? The small matter of retaining a place in the Premier League isn’t just about prestige or maintaining a proud history. Behind the scenes, problems have been building for months, most notably with the sudden and broadly unexpected departure of main sponsor Alisher Usmanov from the scene following Russia’s invasion of Ukraine.

Everton had taken a somewhat surprising route over financing the construction of a stadium that is expected to cost half a billion pounds to complete, relying on Usmanov’s sponsorship rather than getting the financial investment that they needed first, as would be more commonplace. With his departure and a rapidly deteriorating international financial situation which is making borrowing substantially more expensive than it was just a few months ago, this looks increasingly like a gamble that could mis-fire, and the spectre of Everton potentially hosting Championship football at their new 53,000-capacity stadium looms increasingly large on the horizon.

So if Everton supporters are heading into the winter break in a tetchy frame of mind, the reasons for them doing so seem pretty clear. Of course, with the bottom half of the Premier League being as congested as it is this season – even now, they’re only five points behind Fulham, who are 9th – being in 17th place at any given time doesn’t mean that much in and of itself.

But with more than five weeks to stew over things and the costs of failing to stay up arguably greater than ever, Everton’s stop-start season needs to restart with considerably greater purpose than they showed in their two games against Bournemouth. Or Lampard will not be celebrating his one-year anniversary at the club in January.