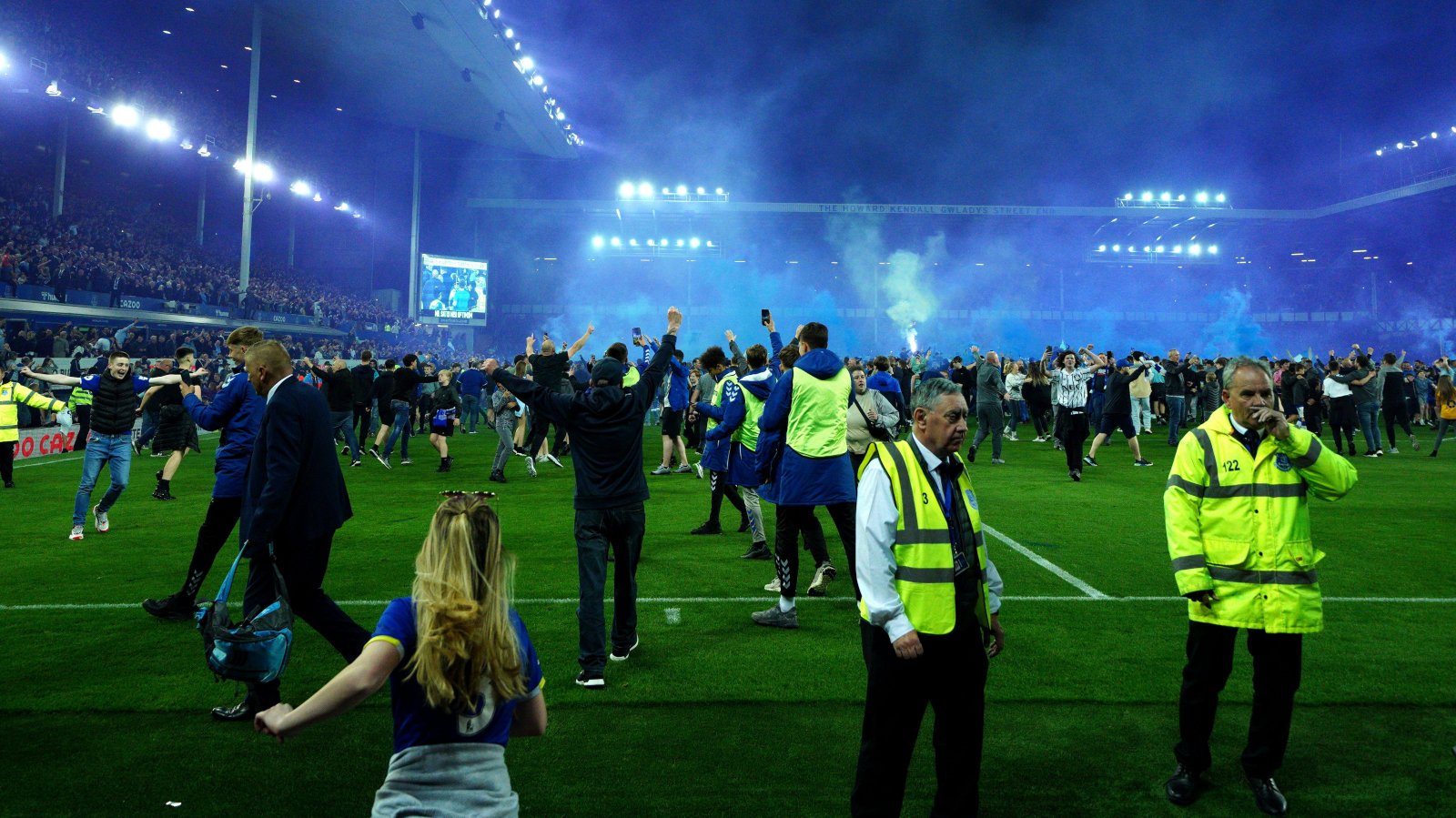 Everton were staring relegation for the first time in decades in the face at half-time against Crystal Palace, but they had been there before.

Well, somehow or other, they did it. It would be a stretch to say Everton turned into a great team during the second half of their match against Crystal Palace. They absolutely, definitely didn’t. But when it really hit the fan, when preparation became a fading memory, the muscle memory found a way of kicking in and they muddled through. For the 69th consecutive season, Everton, the Grand Old Team, will be a top-flight club. And while they’ve cut it finer than this before, the sense of relief when the final whistle blew will have felt just as satisfying.

To say that Goodison Park was up for the occasion would be something of an understatement. Before the match outside the ground, an ostentatious greeting for the players and plumes of blue smoke. Inside, the slightly discordant tones of the theme music to Z-Cars have seldom sounded more dystopian, with the swelling urgency of the crowd enveloping it as the players took to the pitch. Older Everton supporters have been to even greater extremities than this before. On the last days of both the 1994 and 1998 seasons, the Toffees took to the Goodison Park turf on the last day of the season with the Premier League’s trapdoor starting to move beneath their feet. On both occasions, they had just about enough about them to get what they needed. This time around, there was still a game to spare afterwards, but away to Arsenal was hardly a fixture Everton could expect to claim a result from. The volume of the crowd was a tacit reminder that everybody knew as such.

For 22 minutes, that noise didn’t seem to let up. Crystal Palace seemed to have brought their ‘A’ game, but chances were few and far between. That noise level only found a way of increasing still further whenever Everton got over the halfway line. They even pinged the ball off the top of the crossbar from a Richarlison free-kick just over a quarter of an hour in. The match was starting to fit a pattern of few chances, high volume and a degree of skittishness. It was niggly, with every blow of the referee’s whistle greeted with howls of protest.

And then the sky fell in.

The second goal felt like the defining moment of madness, but events of the previous 15 minutes built up to it. Twenty minutes had just passed when Jean-Philippe Mateta jumped at the far post to head Eberechi Eze’s free-kick past Jordan Pickford while the Everton central defence, somewhat surprisingly, seemed to have something better to do. The noise dropped and then rose again, perhaps even louder. But with 11 minutes of the half to play, Jordan Ayew went in for a tackle on Anthony Gordon which barely seemed to make any contact with the ball, his foot cracking into the side of Gordon’s leg instead. It looked for all the world like a foul which should have met the criteria for a sending-off, but referee Antony Taylor (and presumably his video assistant cohorts) thought otherwise and gave him only a yellow card.

It wasn’t inevitable that Ayew should have popped up a couple of minutes later to double Palace’s lead, but such was the absolute state of Everton’s defending throughout the move that led to it that it became so. The disaster started when Seamus Coleman miscontrolled the ball and had it nicked from him by Mateta, whose cross was only half-punched clear by Pickford, as far Wilfried Zaha on the edge of the penalty area. Zaha’s shot was pushed away by Pickford, who was still flapping around, and Ayew, six yards out and unmarked (of course) headed the ball down to dribble over the line between two static defenders, both of whom seemed to be waiting for the other to act.

The second goal was a combination of lapses in concentration, panic, disorganisation and bad luck. The lapse in concentration came from Coleman, and uncharacteristically so. The panic seemed etched into Pickford’s face. He has a tendency towards this sort of thing. The vast majority of the time he is an excellent goalkeeper, but there are moments when the adrenaline seems to go to his head and cloud his judgement somewhat. But overall, Everton’s defensive disorganisation was a group effort – there was, in short, no way that this ball should have got over the goal line – and the bad luck was circumstantial. Ayew probably shouldn’t have been on the pitch in the first place.

The half-time whistle was greeted by a chorus of boos. Just as no Premier League ground does atmosphere quite like Goodison Park, the same applies to booing. And then, during the interval, the news filtered through from Villa Park, where the match between Aston Villa and Burnley had kicked off 15 minutes after this one, that Burnley had taken the lead.

In one sense, it didn’t really matter what Burnley did. Everton’s fate was in their own hands, but they weren’t making a very good job of looking after it. But at the same time, this half of football really epitomised their season. Yes, to a point, there was some degree of bad luck going on, but so much of what they were doing wrong was so self-inflicted that it was difficult to have much sympathy for matters beyond their control.

Attacking the Gwladys Street end in the second half, Everton flooded forward, as they had to. And as they saw the whites of Crystal Palace eyes, they started to work a way back into the game. Eleven minutes in the door marked ‘hope’ nudged open just a crack, when Vitaliy Mykolenko’s deep free-kick was headed down rather than away. Michael Keane, brought back into the team following the dismissal of Jarrad Branthwaite in their previous home calamity against Brentford, stepped in to guide a sweet shot across goal with the outside of his foot and in. The roar that accompanied it wasn’t quite celebration, more a baying for blood, a guttural sound which felt trapped somewhere between bargaining with the devil, hope and disbelief.

As Keane’s shot hit the net, news started to filter through that Aston Villa had equalised against Burnley. A break in the clouds, finally.

When Palace broke they still looked dangerous, but those breaks were scarcer and scarcer. Everton may be limited, but they were snapping at heels, making a nuisance of themselves and getting more and more of the ball. For all their fragility, their players were finding a hint of something from somewhere, an echo of those two Sunday afternoons during the 1990s, perhaps, or even a pastiche of the great Everton teams which had preceded them. And with 14 minutes to play Richarlison scrambled a header over the line and they were level at 2-2.

3 – Richarlison has reached 10+ goals in a Premier League season for a third time for Everton (also 2018-19 and 2019-20), only the second player to do so for the club, after Romelu Lukaku (4). Responsibility. pic.twitter.com/N8dGoumPSm

It’s at these points, when the tactics start to go out of the window and players have to fall back upon the things they haven’t been told to do, that football hits its absolute peak. The boos of the half-time break, the dread that came as the second Palace goal dribbled over the line, all felt like fading memories. Everton poured forward, swamping the midfield. A point was good. A point made it more difficult for the other two teams beside them at the bottom. But a win was safety. A win was survival, and with a game to spare. And when the goal came, it had started to feel inevitable in the preceding minutes. Demarai Gray’s free-kick from the right was headed in by Dominic Calvert-Lewin, a man on whose shoulders a reasonable amount had been placed at the start of the season, only for injury to limit his impact, with five minutes to play.

A proportion of the crowd poured onto the pitch after the goal, which was quickly starting to become difficult to see behind plumes of blue smoke. The celebrating in the stands quickly turned to booing to shoo the pitch invaders off. By the time the pitch was cleared, there’d been a substantial break in proceedings which was reflected by the announcement of a stomach-knotting seven minutes of stoppage-time. But Everton held firm for once, and the closing minutes played out without incident. And at the full-time whistle they poured on again. Twenty minutes later they were still there, as the PA guy tore through his ‘Everton’s Greatest Hits’ CD. Z-Cars didn’t sound like a premonition any more. In spite of the evidence of the previous 37 matches, it was, for whose who really care, still a ‘grand old team to play for’.

And with that, they were safe. The partying will be tempered by the fact that this was still too close to comfort, especially considering the club’s increasingly parlous financial state following the abrupt departure of Aliser Usmanov’s money earlier this year. But that top-flight status has at least now been saved for a 69th consecutive year. Nice.