Home Johnny Nic Why is Samuel Eto’o so under-appreciated on these shores? 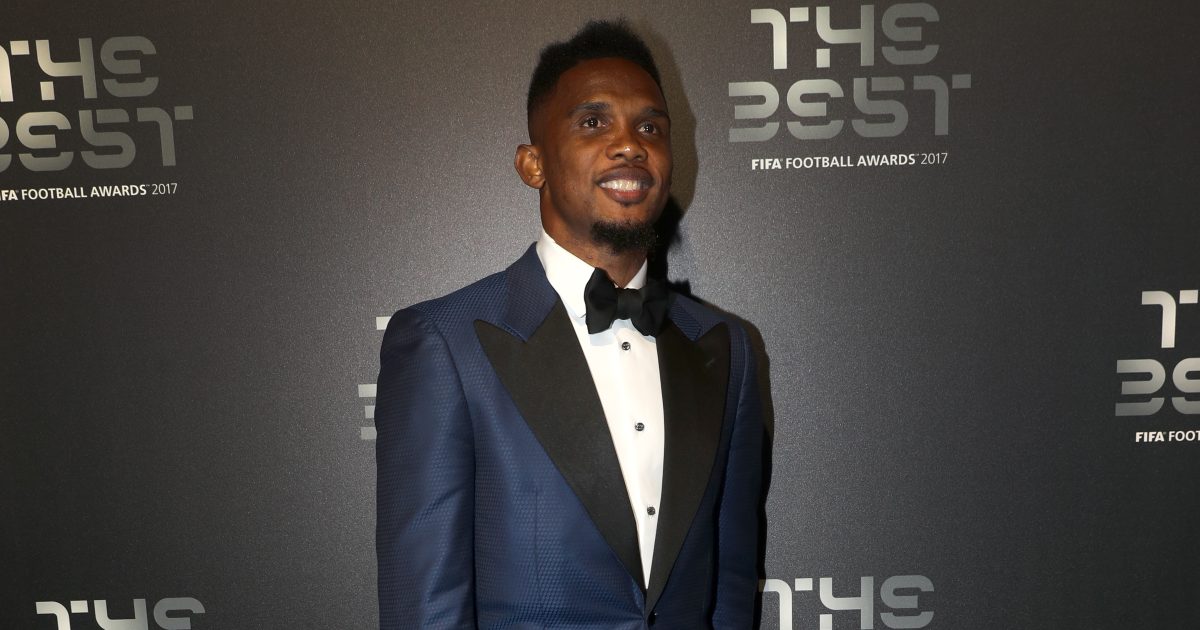 Johnny Nic raves about one of the century’s most-deadly hitmen, Samuel Eto’o. Someone here has to…

Who’s this then?
Samuel Eto’o Fils is a 40-year-old former striker, He was born in Douala, Cameroon and played for a grand total of 13 different clubs but perhaps most famously for Mallorca, Barcelona and Inter Milan. He racked up 764 games in total, scoring a mighty 371 times and only hung up his boots for good in 2019

He is widely regarded as one of the greatest African players of all time, winning the African Player of the Year a record four times: in 2003, 2004, 2005, and 2010. And he was one of the best strikers of his generation in world football.

He got an early start as a 16-year-old at Real Madrid who loaned him to Leganes for a season, then Espanyol, and then Mallorca. This is where he started to really hit the straps. After scoring six in 13 on loan, he signed for the 2000-01 season for a club record £4.4 million. By the time he left, four years later, he was the club’s all-time leading domestic league scorer with 54 goals and 70 in 165 games in total.

Barcelona paid £24million for him and he hit the ground running, scoring 63 in his first 92 games across two seasons. The period between 2006 to 2008 was interrupted by a recurrent meniscus mangling but he still managed 31 in 55 games, all the same.

The 2008-09 season was his final year at Barcelona and it was his best. He played 52 games and scored 36 goals. Thirty in 36 in the league. He totalled 199 games and 130 goals and he left with two Champions League winner’s medals, three league titles and a Copa del Rey, winning a Treble in his last season.

An antithetical relationship with Mourinho turned to love in the end as the Portuguese realised he’d been wrong about a player he was initially dismissive of.

At this point Samuel was 30 and I don’t think it is too harsh to say he began a long farewell tour picking up large amounts of cash from a number of clubs.

The first of these was the newly minted Anzhi Makhachkala who got his services for a little more than two campaigns. He signed a three-year deal that made him the world’s highest-paid player, with a salary of €20million net per season.

He filled his boots with goals again with 36 in 73 games before jumping ship to Chelsea after the Anzhi owner put everyone on big money up for sale. He was at Stamford Bridge for a year (12 goals in 35 games) and an especially weird few months at Everton where he declared he wanted to win the Europa League with them, but couldn’t wait to get out and spend the second half of the season at Sampdoria, before then finding himself in Turkey at Antalyaspor for three seasons. He netted 44 in 77 games, then moved for a season to Konyaspor. His last campaign 2018-19 was 23 games and 10 goals for, somewhat inevitably, Qatar SC.

It was a lucrative and goal-rich last eight years but one which saw him win not a single trophy and as a result, his brilliant previous 10 years had the shine taken off it a little.

However, his international career saw him become the all-time leading scorer in the history of the Africa Cup of Nations with 18 goals, and he is Cameroon’s record goalscorer and third most-capped player with 56 in 118 games.

Why the love?
Aside from being a goal guarantor, watch him at any point in his career and you’ll see a player quite unlike any other I can think of. He goes from standing start to running hard and fast in the blink of an eye. He has quick feet, can bulldoze his way through a defence, can dance his way past, can shoot from 35 yards or knock in a rebound off the keeper. He’ll power in a header or will play through the middle but can also come in off the right. There is something absolutely irresistible about him in his pomp, something unstoppable, at least because he does it with a “I’m gonna mess you up” look on his face.

He’s a serious fella who went about the business of scoring goals with a dedication that only those for whom goals offer some definition to life can. He oozed determination from every pore at an early age onwards and his wild goal celebrations hint at a man whose emotions run deep.

When you look at his career as whole, while he played as a central striker often, he was not limited to that position. He could play right across the front line and in a withdrawn supporting role. In 2005-06 he was the Champions League’s top assist provider and that was how much more to his game there was than merely scoring a huge amount of goals. An intelligent, quick-thinking player, he was speedy, direct, incisive and with great close control. His time at Inter under Mourinho saw him playing on the wing and in midfield. In that legendary game against Barcelona, he even played right-back after Thiago Motta was sent off.

He deserves acknowledgement for being one of the first black players to not just try to swallow down the racist abuse he suffered in Spain, or ignore it. He wasn’t having it and kicked up a fuss about, attempting to walk off the pitch at one point against Real Zaragoza whose fans were doing monkey chants every time he touched the ball. But little was done, even his boss Frank Rijkaard told him to stop complaining about it. Samuel was not convinced and was not for the shutting up nor for the going quietly. In Italy it was a similar situation. That he was left isolated by these incidents speaks horribly of the racist culture within football in the first decade of the 2000s and of the failure to understand its impact. Has it got any better? You’d hope so, but at times it seems not.

The fact he won back-to-back Trebles with Barcelona and Inter Milan is a massive achievement but one which barely even makes a footnote in history over here. Can you imagine how that would be sold to us if it was an Englishman who had done that? 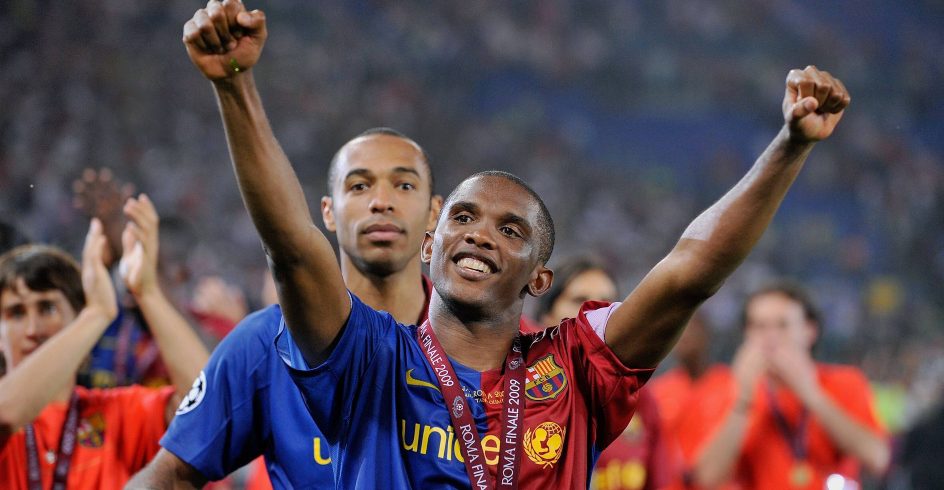 What the people say
Samuel only played a season and a half in the Premier League and that inevitably limited how exposed we were to him. Even so, the post bag this week was a lightweight affair. Once again, it shows how focused on these shores many in England are encouraged to be and consequently, until you cross the water, you’re not really on the radar, especially going back 15 or 20 years.

We can’t ignore this as a harmless trend; it infected the whole of the English game and I have no doubt at its extremes, it represents the narrowness of a vision of the football public which veers from outright Little England xenophobia and often unspoken or hidden suspicion about ‘the foreign lads’.

But we do have a 4_4_haiku to start with

Mentor to Messi
Often wrongly written off
Back to back trebles!

– Loved his little stint at Chelsea, not just the goals but somehow the kit really suited him (these are important factors to me)

– A man obsessed with self-improvement & putting in the hardest of hard yards, who excelled at his job.

– In his prime he is one of the most underrated world class forwards, he spent just one season at Chelsea, scored a hat trick against United and invented the “Old Man” celebration v Spurs, personally love the guy and grateful he spent a year with us!

– A ruthless finisher and winner. What a CV. One of those players who, I seem to remember, always said he’d score, and then did. Giovane Élber was the same. He’d say something really confident before a game, and then deliver. I found it both infuriating and admirable.

– Somehow, he was always under-rated by the British press. They’d be banging on about Henry, RvN or Torres being the best striker in the world, while Eto’o was cleaning up in Spain. His trophy cabinet must be groaning under the weight of all his medals.

Too many things to mention but my own top three Samuel Eto'o memories in no order:

His entire time at Real Mallorca, esp when he gave out €30,000 to pay for travelling fans meals at the CdR final.

The Real Zaragoza ‘incident’ where a lot of mostly white blokes try to tell a black bloke to ignore the racist chanting and convince him to stay on the pitch. The whole thing is disturbing…

Future days
Retired for just a couple of years, it’s unclear if Samuel will go into management. He had a brief interim spell at Antalyaspor as player-coach for five games back in 2015-16 but hasn’t seemed keen to dip his toe into that particular pool since. His financial situation will certainly not demand that he has to work ever again if he does not want to. Although he spent 18 months in the Premier League, his reputation lies away from the self-appointed Best League In The World and its narrow self-belief in its own primacy. And that is significant. He’s a far bigger star in other territories than he is in England, so I think we can expect him to have nothing to do with English football in the future.

He is one of those super-rich players who aged 40, has no financial need for a working life from now until he draws his last breath in possibly up to 60 years’ time. That must be quite an odd thought. What would you do with your time? There’s only so much lounging around doing not much that you can do before life must begin to lose any meaning.