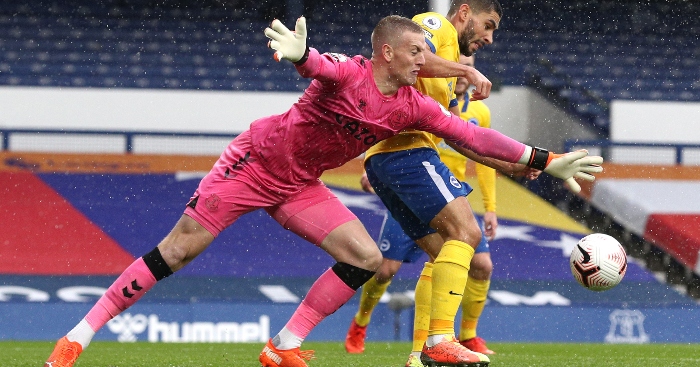 Carlo Ancelotti has very little to worry about right now. Everton are sat at the top of the Premier League table; Dominic Calvert-Lewin is the hottest striker around; and his new signings have settled in like they were born to play at Goodison Park.

Indeed, the win over Brighton makes this Everton’s best start in 126 (one-hundred and twenty six) years. So this weekend, Ancelotti deserves to be smoking the fattest Cuban and quaffing the finest red. Instead, the Toffees boss will probably be looking for another goalkeeper before Monday’s transfer deadline.

Jordan Pickford boobed again and while his team-mates once more dug him out of the Seagull sh*t, Ancelotti can no longer ignore the England goalkeeper’s catastrophic form.

The Italian excused Pickford his pair of dropped bollocks in the Carabao Cup at Fleetwood, instead spreading the blame around when the keeper was caught out trying to force a pass out from the back. Shortly after, with the adrenaline still pumping, Pickford got himself in a fluster while trying and failing to keep out Town’s second goal.

Ancelotti then gave Pickford a pass many suggest he didn’t deserve but there can be no excuses for his latest howler. Leandro Trossard’s volley into the ground was the simplest of catches for a schoolboy stopper, yet England’s No.1 found the soggy ball too hot to handle. Neal Maupay pounced on the rebound, reacting quicker than Everton’s keeper and centre-backs to level for Brighton.

Jordan Pickford won't want to see this one again…

Neal Maupay is quick to capitalise on the mistake! 👏 pic.twitter.com/REVKNcT7R1

We could break down Pickford’s latest balls-up into micro-moments, scrutinise his movement and technique, then suggest what he could change. But Ancelotti won’t be in the mood for such detailed analysis. Yes, it was raining. But this was a ball you would expect a Premier League goalkeeper to hold in the face of a tsunami, let alone a shower.

No player has made more errors that have led to goals than Pickford’s five since the start of last season and though Ancelotti seems to be getting more out of every Evertonian since his appointment last December, his goalkeeper is the obvious anomaly.

The improvement around Pickford may be part of the problem. Everton have spent the early part of the season on the front foot and only Liverpool have allowed their opponents fewer shots on their goal. Is Pickford struggling to deal with such inactivity?

It has been often said that Pickford is the type of goalkeeper who thrives on constant stimulation. If you take that away, like a hyperactive toddler, he starts acting up. Top-level keepers have to be content with that inactivity and be able to retain their focus without being busy. But Pickford seemingly needs to be involved to stay concentrated.

Perhaps that could be excused from a young goalkeeper but Pickford is now 26. As England’s No.1, this should not still be a problem and the fact it remains so makes it less likely it will ever be remedied.

Some competition for his place might focus Pickford’s mind. But it hasn’t done the trick at international level and Gareth Southgate will surely use the next 11 days to look at Nick Pope and Dean Henderson, who has demonstrated in two Carabao Cup appearances for Manchester United that he can stay in the game even while he is not always directly involved in it.

Ancelotti wasn’t sure when he acknowledged Pickford’s poor form in July. “I don’t know if he needs competition. I know that he is not doing well. I spoke with him. He’s not doing well.”

The Everton manager has little choice but to at least give Pickford something to ponder. The only threat to Pickford’s position in three years at Goodison Park has been his own form. With no deputy, neither Marten Stekelenburg or Jonas Lossl, trusted to take over the gloves even to give Pickford a time out, there are never personal consequences for his individual mistakes.

Ancelotti will certainly have had a look at the market and Sergio Romero is the name most linked with Everton. The United keeper has been relegated to third choice, through no fault of his own, when many suggested he should have replaced David De Gea at times last season in the Old Trafford goal.

Romero is just what Everton need – an experienced stopper accustomed to serving as back-up yet capable of being the main man. To leave him to rot at United would be the first mis-step Everton have made all summer and though the early part of a perfect season so far.