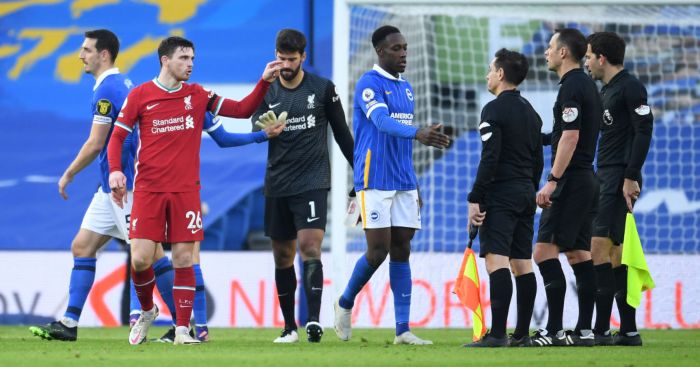 Jurgen Klopp and his staff may have something else to talk about this evening to move on from debates around the five substitute rule and fixture scheduling. Liverpool have themselves and Video Assistant Referee (VAR) to blame after Brighton held them to a 1-1 draw at the Amex Stadium on Saturday.

Ahead of the match, Klopp admitted that he would have to make “late decisions” over a number of players as hectic schedule took its toll on his squad. Fabinho, Roberto Firmino, Diogo Jota, Andy Robertson, Takumi Minamino and Nathaniel Phillips all came into the side following their midweek 2-0 loss to Atalanta in the Champions League, while there was a place for captain Jordan Henderson on the bench.

Rio Ferdinand told Klopp to “get on with it” in midweek after the Liverpool boss snapped at a BT Sport reporter on Wednesday night, claiming the fixture schedule was “nearly a crime”. His team seemed to be getting on with it in the first ten minutes against Brighton, popping it around between themselves without really troubling Graham Potter’s side.

But that all turned on a moment when Brighton managed to get in behind the Liverpool defence on 11 minutes. Aaron Connolly was sent through on goal but missed the target when he should probably have scored. From then on – until he was taken off in the second half – Connolly was a constant thorn in Liverpool’s side and the Republic of Ireland international won a penalty for Brighton on 20 minutes, only for Neal Maupay to screw the spot-kick wide.

6 – Liverpool have dropped more points from winning positions this season (6) than they did in the whole of last season (5). Drama. #BHALIV pic.twitter.com/69oIaaKcTc

It’s not the first time Liverpool have been fortunate with a penalty miss this season, with Manchester City star Kevin de Bruyne also missing the target from the spot against them earlier this month. Then, completely against the run of play, Mohamed Salah scored past Mat Ryan only for it to be ruled out by VAR after the Egyptian’s toenail was adjudged to be offside. It would have been an undeserved reward for a half of toil and struggle for the defending champions.

Phillips, Fabinho, Williams and regular Andy Robertson made up an unfamiliar back four but it was Klopp’s team as a whole who were off colour. Minamino, who was starting his first game for Liverpool in the Premier League this term, playing behind the front three was ineffective in the first 45 minutes with his passes generally going sideways, rarely forwards. Jota, Salah and Firmino were finding it hard to get into the game and Klopp was clearly missing some energy and control in his midfield.

Klopp’s decision to bring Henderson on at the interval for Neco Williams, who was guilty of giving away the penalty, bore fruit. James Milner switched to right-back and the Merseysiders immediately looked more balanced. Jota fired in his ninth goal in eight starts for the Reds to put them ahead at the Amex on the hour mark and further cement his place in the side. The Portugal international is now only two goals short of the figure he scored for Wolves in the Premier League last term as he dazzled the Brighton defence before firing low past Ryan.

9 – Diogo Jota has scored nine goals in 14 appearances for Liverpool in all competitions, including eight in his last eight. Clinical. #BHALIV pic.twitter.com/PQynX5MU1G

However, it was to be the VAR that would ruin Liverpool’s day. The marginal offside decision from the first half was followed up by a Sadio Mane effort being correctly chalked off – but it will be the injury-time penalty decision that really stings for Liverpool. VAR asked Stuart Attwell to take a look at a challenge from Robertson on Danny Welbeck, with the referee giving the penalty after viewing the tackle in slow motion. There was definite contact but was it a clear and obvious error from the official in the first instance? No chance.

Yet again technology was the talking point as it decided another game of football and Liverpool captain Henderson was absolutely fuming with the decision after the match.  He said: “It was ours. It should be three points, in my opinion. I’ve seen the replay. Who would be happy? It’s not a pen. It feels like we’re standing here every week and discussing incidents. I don’t want to get into trouble, but for me it’s not a penalty.

“In the first half there were things we could improve on, in the second half we did that. We had a couple of goals ruled off for offside. Overall we’ve got to be positive and take the performance out of it, because the result isn’t anything else but an error in my opinion. You’d rather get beat by two or three than end up like that. It feels like two points taken away from us.”

The point took Liverpool top of the Premier League but with second-placed Tottenham facing third-placed Chelsea tomorrow it was a great opportunity for Klopp’s side to cement their place at the summit. The Reds’ injuries all over the pitch create a guarantee that they will drop more points over the coming weeks and months. They still look favourites to win the title, especially if they get the likes of Thiago Alcantara back into the team soon, but it now makes for an exciting race to the top. Over to you Tottenham and Chelsea.