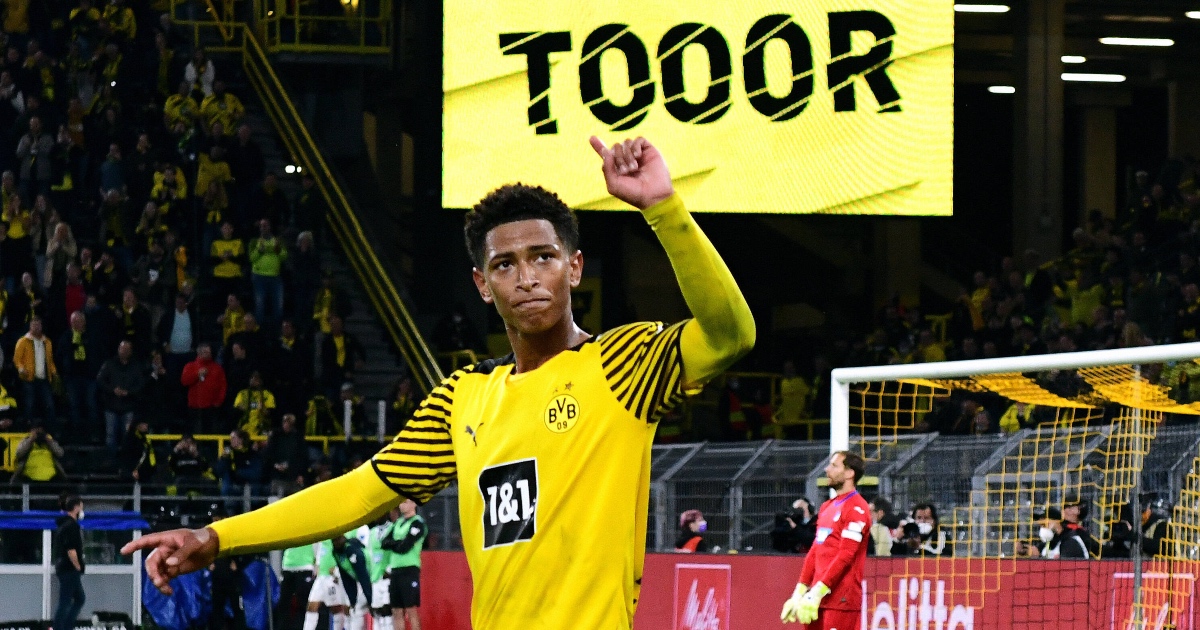 Jude Bellingham has the skillset to rip up the Premier League blueprint – he could usher in the next stage of English football evolution.

Knocked to the ground, Jude Bellingham got up with the ball at his feet, shielding it from two players, before a drag-back and swept nutmeg kept England in possession. Those writing home about the win over Andorra focused on the kid from Stourbridge.

With skill matched by his confidence, the 18-year-old has gone from playing Championship football for Birmingham City to starting for the European Championship finalists in just over a year, taking it all in his languid, mesmeric stride.

Obviously this is football so we have to talk comparisons. Steven Gerrard, Frank Lampard and Paul Scholes were also box-to-box midfielders and should the teenager forge a career to match any of that trio, he would consider it a job very well done. But that trio would not even have considered attempting the range of skills the Borussia Dortmund star pulls off in tight spots.

Jack Wilshere is compared so frequently with English midfielders because as soon as anyone shows the tiniest bit of poise on the ball and any semblance of a glide past a player, he’s the only central midfielder with which we can viably draw any sort of parallel. But Bellingham isn’t all that much like Wilshere and watching him begs the question as to whether England have ever had a central midfielder of this ilk, good enough to represent the national side.

He’s the attacking surrogate to Declan Rice and Kalvin Phillips – an England alternative capable of ripping up the current Premier League blueprint.

While Chelsea have shown interest and Manchester United are still keeping tabs despite Sir Alex Ferguson being pied by the then-16-year-old after he showed him round Carrington, it’s Liverpool who are reportedly leading the race. Klopp has made Bellingham his ‘top target’ and the Reds are said to be preparing a club-record deal. Though Dortmund may have other ideas.

Of the top Premier League sides, a move to Liverpool makes most sense. Klopp’s midfield is set up in similar fashion to Dortmund’s, with one proper holding midfielder behind two others. It’s a system that suits Bellingham’s skillset, allowing him the opportunity to create in the knowledge that Fabinho would be around to pick up the pieces.

But the vast majority of Premier League teams play with two holding midfielders – look, we ranked them. Thomas Tuchel’s Chelsea illustrated last season how effective that can be, but it’s not a system exempt from limitations.

Excluding penalties, Chelsea’s three holding midfielders – Jorginho, N’Golo Kante and Mateo Kovacic – failed to score a goal in the Premier League last season. Rice, Jordan Henderson and Phillips have scored a total of three goals in 78 combined appearances under Southgate. It’s not in their remit – which is to break up play, control possession and break the press, if and when it comes – but it’s not as though Kante, Kovacic or Rice never get into positions to shoot; they just don’t, or miss.

And Tuchel’s deadline day move for Saul Niguez is perhaps indicative of a desire for more of an attack-minded influence from that deeper role, and Paul Pogba’s place alongside half a McFred hints at a similar hankering for further midfield enterprise from Ole Gunnar Solskjaer. It’s a balancing act, but if Chelsea, Man United or any other double six man can add creativity and goals from that area of the pitch, without upsetting the equilibrium, it’s the sort of change that could ripple into other Premier League sides. It’s just a case of finding the right player.

Eric Cantona’s arrival at United saw the ball played through midfield, Thierry Henry showed that a striker can score goals coming from the wing and Claude Makelele shaped his own position. Special players can cause sea changes in teams, leagues, countries and football in general – altering the landscape of the game for years to come simply by playing their natural game. It doesn’t always take the very best players in the world to do that, but someone who simply offers something different to allow a club to steal a march on their rivals, to force a game of catch-up.

Romelu Lukaku and Cristiano Ronaldo are players with the potential to win their team the title this season. But Bellingham has a skillset capable of shifting the dynamics, formation and tactics, not just of the team he eventually joins, but the rest of the Premier League watching on, who will see a midfielder in the guise of a No.6, with an attacking cheat code they might then be desperate to clone.