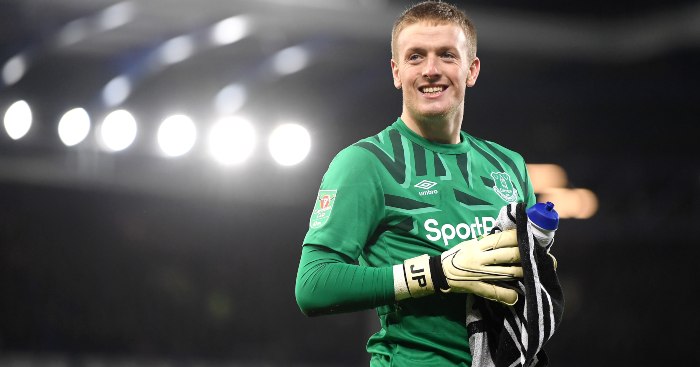 It hasn’t been a great couple of weeks for Jordan Pickford. In fact, it’s hardly been a stellar 18 months for England’s No.1. But that is what he remains, even if his credentials are now being very loudly questioned.

Pickford could do little to deny Arsenal any of their three goals at the Emirates on Sunday, though one mistake – a misjudged pass out from the back which led to Eddie Nketiah hitting the crossbar – has resonated with his critics, especially coming on the back of an error the previous week which the Everton keeper himself described as “disgusting”.

Such mis-steps have left Pickford firmly in the firing line, particularly over his status as Gareth Southgate’s first-choice stopper. As the focus turns towards Euro 2020, supporters and pundits are panicking over the security of the Three Lions’ goal.

Don’t mistake Pickford’s restlessness for panic. He’s always been highly-strung; it has been a part of the 25-year-old’s make-up since he came up through the ranks at Sunderland, via numerous steps up the league ladder, and that hyper-active personality is part of the reason he has ascended to the England goal so quickly.

That trait, once considered compulsory in anyone seeking to gain membership of the goalkeeper’s union, is now being used as a stick with which to beat Pickford. After endearing himself to the nation during the World Cup of 2018, it seems his novelty has worn off already.

It doesn’t help Pickford that his peers appear to be cut from a different cloth. David De Gea, Alisson and Ederson have all taken it in turns to re-write chapters of the Premier League goalkeeper’s manual in recent years, and that trio share a cool, calm exterior in contrast to Pickford’s daft puppy demeanour.

But that is not to say that Pickford represents a bygone era of goalkeeping. Quite the opposite. There isn’t an English keeper as comfortable with the ball at his feet, and it is that quality which will see Southgate swerve the temptation to replace him.

That is the belief of Carlo Ancelotti, who should know a keeper when he sees one given his list of previous No.1s. Iker Casillas, Gianluigi Buffon, Edwin van der Sar, Manuel Neuer, Petr Cech…the Everton boss isn’t a coach who suffers sub-standard keepers gladly. “I read that I’m looking for a goalkeeper,” he said unprompted last month. “This is not true. I have a great goalkeeper, who is the goalkeeper of the national team.”

Southgate has also taken his opportunities to lend his backing to Pickford. “He has had an incredible impact for England in the past two years,” said the manager in September. “He has made big saves and allowed us to play from the back in an expansive way.

Southgate also described Pickford as “being a lot calmer”, which will come as a relief to the likes of Alan Shearer, who was among those – quite reasonably – criticising the Everton keeper for a  “ridiculous and bizarre” performance in a defeat at Newcastle in March which saw the stopper concede and save a penalty while allowing himself to get caught up in the palaver which inevitably surrounds a self-confessed Mackem going into battle at St James’ Park.

Jordan Pickford with some Inspector Gadget style arm stretching here. What a save pic.twitter.com/ukpChung1f

If Southgate is content that Pickford is smoothing those edges – for that is what is required, rather than a complete personality transplant – then we should be content to trust his and Ancelotti’s judgement.

And we have to consider the alternatives for England. Pickford is not perfect, but we know he is better suited to England’s style than Southgate’s other options.

Dean Henderson and Nick Pope have both had fine seasons for Sheffield United and Burnley. Statistically, they have outperformed Pickford when it comes to keeping the ball out of the net. Henderson has the second-best save percentage behind Alisson; Pickford has the second-worst above only Kepa of those keepers to have played at least 15 games. Henderson has made one error which has led to the concession of a goal – the awful mistake against Liverpool which earned him no sympathy from Chris Wilder – while Pope and Pickford have made a couple each.

But Southgate places huge emphasis on what Pickford’s sweet left foot can do as well as his hands. Only two keepers have played more passes in the Premier League this season, with Pickford playing 178 more passes than Henderson and 127 more than Pope. On average, Henderson and Pope both give away possession 17 times per 90 minutes – only Ben Foster presents the ball back to the opposition more – while Pickford’s 57% passing accuracy is comfortably better than Pope’s 37% and Henderson’s 36%.

The time has also come to accept that England goalkeepers make mistakes – like any other. Pickford has sussed that some critics will never be happy with anything less than flawlessness and some pundits even took umbrage over the 25-year-old saying so.

“The press and everybody, the punters – look at Gary Neville – they just want to come for England players,” said Pickford recently. “You have to live with it. I know what I’m capable of and I know what I’m good at.”

The treatment of Pickford’s predecessors in the England goal suggests he has a valid point. Paul Robinson, Rob Green, David James and Scott Carson all suffered under the intense heat of the spotlight fixed upon the England goal. Joe Hart was built up to be the best since Seaman before his reputation was mercilessly torn apart when it transpired that he wasn’t the love child of Gordon Banks and Peter Shilton.

There are a lot of parallels between Hart and Pickford in terms of personality – let’s not forget that Henderson is hardly a shrinking violet – but we have to remember that confidence which sometimes strays into arrogance is a trait which has brought these keepers to the England goal. It is hardly fair to then criticise our No.1s for one of the characteristics which made them stand out from their peers; we have to break the cycle of tearing down the last line of our own defence.

Pickford has become a calmer keeper and personality over the last ten months or so. When it comes to judging England keepers, perhaps we should all follow his lead.