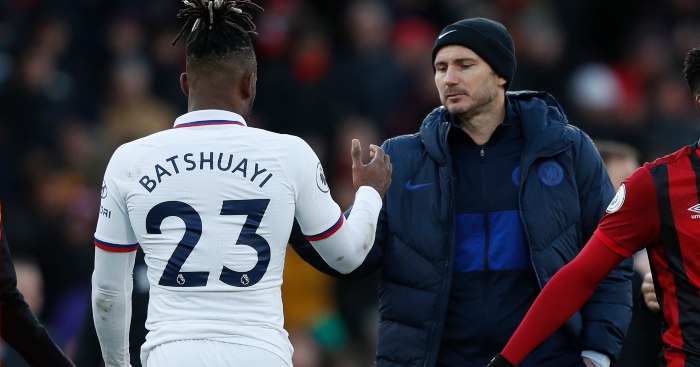 Dean Court was witness to Maurizio Sarri’s darkest day as Chelsea’s head coach. Eleven months on from that 4-0 defeat, the mood might be different but many of the same questions remain.

Questions which Frank Lampard’s side failed to answer during their 0-1 loss to Bournemouth at Stamford Bridge, back in December, and which were posed again by an inconvenient 2-2 draw on Saturday.

This time, they were initially much more convincing. Bournemouth’s decline has undoubtedly made them a milder threat and chastened by a season of under-performance and injury, even their tried and tested counter-attack has lost its teeth. For the most part, Chelsea played out of their own zone under only the most sporadic press and explored the home penalty box with very little threat of a break in the other direction.

At half-time, all was well. Not just because Marcos Alonso had given them the lead, ramming home after Olivier Giroud’s header came back off the crossbar, but also because they had enjoyed so much control. After looking so hapless in midweek and being so comprehensively beaten by Bayern Munich, it had been an authoritative response promising a useful catharsis. They were commanding.

Within 15 minutes of the second half beginning, though, that had all changed. A good day was turning into a bad one and an exorcism was becoming yet another haunting. Without the context of those previous defeats and their common themes, the two goals Bournemouth scored within three minutes could probably have been described as random wounds. Alas not. They were shockingly familiar, combining all the worst parts of those last two encounters.

First, the Jefferson Lerma header, which made Matteo Kovacic look like a child and turned Willy Cabellero into Kepa. Then, three minutes later, a back-post tap-in for Josh King, who had been left all alone after Philip Billing had sprung Jack Stacey down the right and Chelsea’s defenders had failed to react to a quick and decisive break.

Mistakes happen. What was so discouraging about this Chelsea performance, though, was how little awareness they showed for what could go wrong. Given what Bournemouth did to them at Stamford Bridge and with last season’s result still relatively fresh in the mind, they had few excuses for loosening their grip on this game.

Bournemouth were beaten at half-time. The crowd was quiet, the players were flat and all the trauma of the season was showing in their jittery, disconnected and – often – muddled football. That’s how superior Chelsea were and, accordingly, nobody in the stadium would have even staked their pocket lint on a comeback.

To drop points from that situation, then, doesn’t describe anything good. Lampard will have been encouraged by the way his players responded to falling behind, because at 2-1 all their dominance returned. They peppered the home goal with shots during that final half-an-hour and an equaliser seemed inevitable long before it actually arrived. Alonso, again, was decisive in front of goal, reacting well to a rebound.

19 – Marcos Alonso has scored 19 goals in the Premier League for Chelsea; the most of any defender in the competition since the start of the 2016-17 season. Resource. pic.twitter.com/pWkWOFm6Ha

So there is a way of spinning it – of presenting it as a point retrieved rather than two lost. But that just ignores the obvious. It plays dumb to the 73.4% possession Chelsea enjoyed, the fourteen corners they forced and also pays no attention to their near total territorial domination. This game’s result was different this time, but its tone, texture – and ultimately its statistics – came with an overwhelming sense of deja vu.

There are no such things as hoodoos, curses or bogey sides. There are only teams and players who refuse to learn lessons. A draw here is hardly terminal for Lampard, because he and Chelsea are still in the box seat for Champions League qualification, but it was an avoidable setback after last weekend’s win over Tottenham.

It’s another stumble, another trip on the long road towards the end of the season. A less forgivable one, too, given that Chelsea should know exactly where these potholes lie.