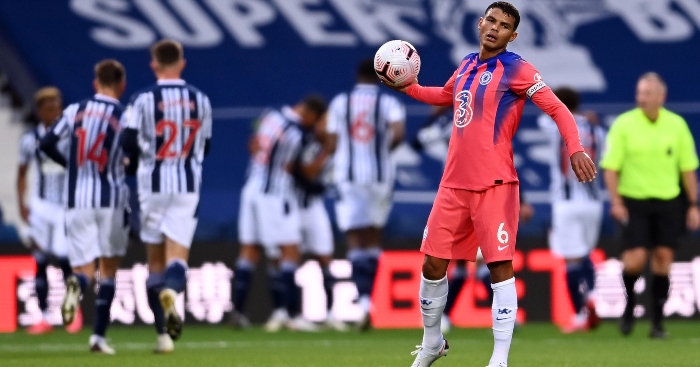 Kepa Arrizabalaga is a huge problem for Chelsea but the thrice-axed goalkeeper is clearly not THE problem. With this defence, unless Petr Cech has somehow discovered in Edouard Mendy the reincarnation of Lev Yashin, it almost doesn’t matter who guards Chelsea’s goal.

The Black Spider at his peak might have struggled to keep his composure had he played behind the back four fielded by Frank Lampard at West Brom. While conceding three first-half goals, Chelsea’s defence failed catastrophically, individually and collectively.

The Blues have acted to remedy their Kepa concern but still the chaos ahead continues unabated. Since Lampard’s appointment, no team in the Premier League has conceded as many goals away from home than Chelsea and to suggest the fault rests in the keeper’s careless hands is a smokescreen.

Chelsea have acknowledged the need to improve their defence, and big signings have been made. Big money was paid for Ben Chilwell more for what he can offer further forward on the left-hand side but the arrival of Thiago Silva was expected to stiffen up the heart of Lampard’s defence. The early evidence suggests the 36-year-old will struggle to plug Chelsea’s leaks alone.

Silva was handed the captain’s armband on his Premier League debut but the 45 minutes during which the Brazilian skippered the Blues were perhaps the sloppiest of Lampard’s chaotic reign so far. Chelsea barely put a foot right, not least Silva, who let the ball run under his to allow Callum Robinson a second goal of the evening.

Before then, Marcos Alonso had already endured a torrid opening which saw him boob in the run up to Robinson’s first, prior to being booked after getting skinned alive by Semi Ajayi. That was just in the first seven minutes.

Lampard pinned the blame on Alonso too for West Brom’s third when Chelsea failed to offer any reaction to the hosts’ pre-planned corner routine. “Marcos lost his man,” said Lampard after but the Blues coaching staff need look at their negligence too.

Chelsea conceded 12 goals from set-pieces last season and the answer they have come up with through the summer seems to be ‘stick 11 men between the goal-line and penalty spot’. But West Brom pierced the bundle of Blues by pulling the delivery back to Darnell Furlong unopposed on the edge of the box, and his header found Kyle Bartley in similar space on the edge of the six-yard box. Some Chelsea defenders pushed up upon the first ball but Reece James switched off to play Bartley on side.

Chelsea’s set-piece problem pre-dates Lampard – it was a similar flaw under Maurizio Sarri, who changed from Antonio Conte’s successful man-marking approach to a zonal system. Lampard has tried both yet cannot find a solution. His players apparently aren’t much help. If Silva’s experience extends to organising a functioning defence of set-pieces, perhaps that should be the focus of his English lessons this week so he can spread the message sooner rather than later.

Veteran Silva, no longer blessed with the type of pace required to regularly defend one-versus-one, might be more concerned with what is going on in open play. Both he and Andreas Christensen were left exposed by the full-backs bombing forward – James chucked in a dozen crosses in the opening 45 minutes around West Brom’s goals – while N’Golo Kante and Mateo Kovacic failed in their screening duties. No wonder Declan Rice’s ability to play a centre-back or a defensive midfielder appeals to Lampard. Unfortunately, he can’t do both at the same time.

The Chelsea boss admitted that the character his side showed and the point it earned were the only positives to take from an infuriating evening’s work. But the Blues, even with all their new attacking talent, won’t be able to bail themselves as repeatedly as they commit the errors they have in the opening weeks of a defining season for Lampard.