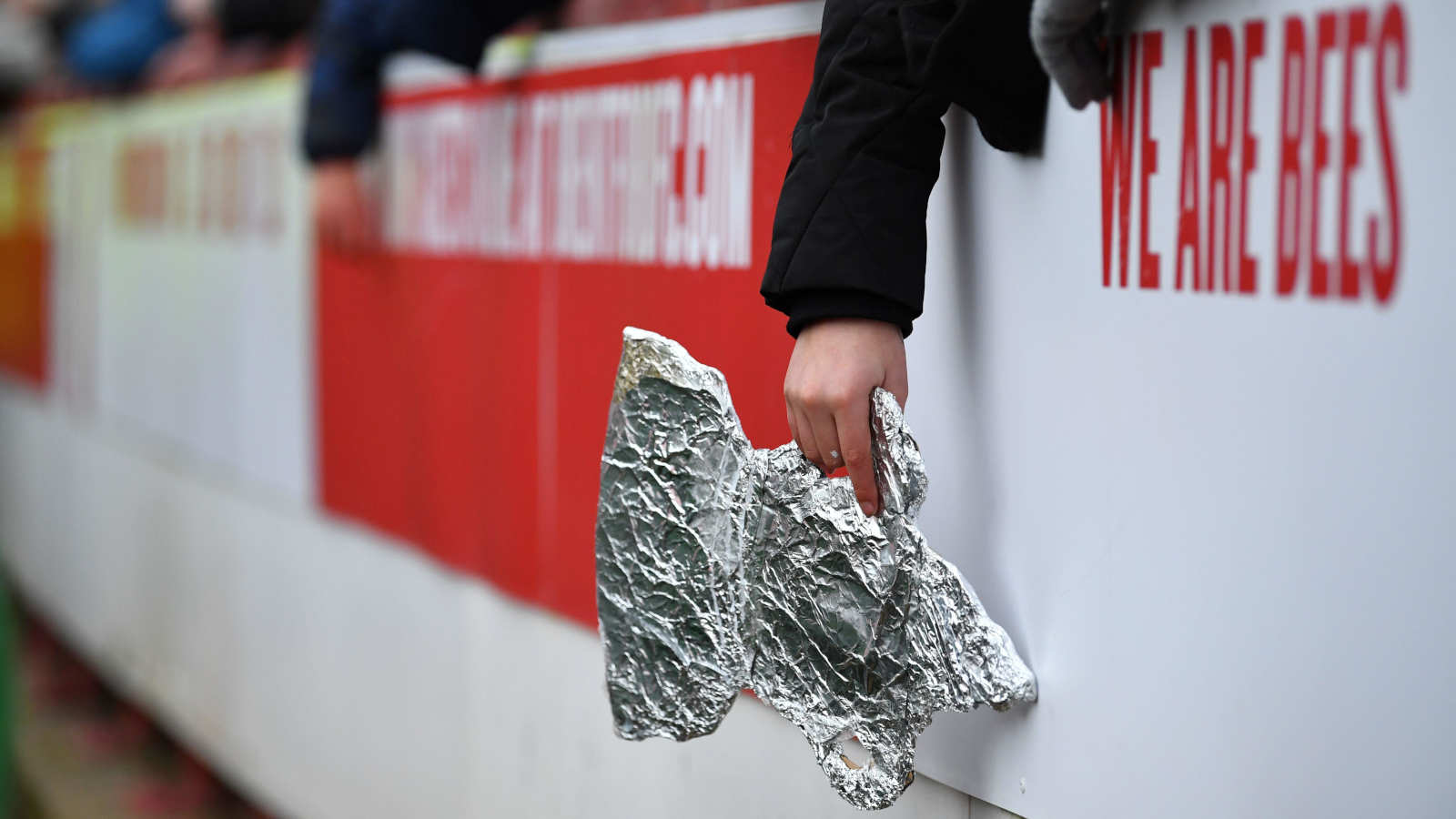 The FA Cup Final has been on the wane as a sporting event over the last three decades, but in some senses it’ll never stop mattering.

For a country that is constantly crowing about its status as the ‘home of football’, England sure does love ripping up that history. When it suddenly – and in some cases painfully – became apparent in the mid to late 1980s that dozens of grounds had been allowed to run to seed and that many would need to be renovated or rebuilt, little serious attention was paid to preservation of the past. Bricks and mortar were swept away to be replaced by plate glass and steel.

Something similar could be said for the FA Cup, although it should also be added that at least the new generation of stadia are broadly more comfortable and definitely safer than their predecessors, while the world’s oldest football tournament remains in the doldrums, slowly eroded by a combination of tinkering with a winning format, increasing disinterest from clubs and subsequently supporters, and a shift both in club priorities and financial parity.

Having been born in 1972 in north London, my formative years as a football supporter were forged by the FA Cup. In 1981, at the end of my first full season as a fan, Spurs reached the FA Cup final while my local non-league team, Enfield, reached a fourth-round replay. The following year, Enfield lost narrowly to Crystal Palace in the third round but reached the final of the FA Trophy, non-league football’s equivalent to the FA Cup, also at Wembley, on the Saturday before Spurs played QPR at the same venue. Enfield beat Altrincham 1-0 on the first Saturday and 11 days later Spurs won after a replay.

I more or less presumed that winning the FA Cup was a naturally occurring phenomenon for Spurs, even though I was vaguely aware of the fact that they’d previously not even reached a final since before I was born. I was given a rude awakening when they were dumped out in the fifth roun by Everton the following year, and they’ve won it once in the 40 years since. They haven’t reached the final in more than 30.

It’s difficult to grasp how big of a deal the FA Cup used to be. The real explosion in its growth started in 1953, when television ownership took off ahead of the Queen’s forthcoming coronation and the BBC used the FA Cup final as an opportunity to dry-run their outside broadcast equipment, and reached its peak in 1970, when the replay of the final between Chelsea and Leeds United was watched by 28.49m people, still the sixth largest television audience ever recorded in this country. Until the early 1990s, it was routine for a club’s biggest attendance of the season to be recorded in the cup rather than in the league.

But since the early 1990s, its fortunes have been on the wane. The riches on offer in the Premier League and the growth in the importance of European football have diminished the perceived importance of winning a competition for the sake of winning it. There’s an element of chicken and egg to the story of declining attendances and under-strength teams in the competition, but the slow abandonment of replays and other changes to its format have only added to the idea that the FA Cup  is now a burden upon the schedule, rather than a centrepiece.

Yet stubbornly, the FA Cup refuses to die. It matters enormously in the non-league game, where scrapping your way through a thicket of preliminary and qualifying round matches just to get to the first round of the competition feels like reaching a cup final in itself. Furthermore, in recent years television companies have taken its early stages more seriously than would even have been imaginable 30 years ago, with the live broadcast of matches from its first stage, the extra preliminary round, in August on, and huge attention being given to non-league teams in a plethora of both live matches and highlights.

And that matters. In November, I went to the first-round match between St Albans City and Forest Green Rovers. We moved to St Albans when I was ten, so that’s a club with which I’m very familiar. City hadn’t beaten a league club in the FA Cup since the 1920s. Older supporters still talked with something approaching reverence about a second-round match against Torquay United in 1980 which they drew 1-1, before losing the replay.

I haven’t lived in St Albans for two decades now and was aware that crowds had gone up since pandemic restrictions were lifted, but it was a touching moment to see Clarence Park sold out for the first time since I first went been there four decades earlier (we moved a couple of months after the 1982 FA Cup final), an exuberant but entirely well-behaved and very young-looking crowd of 4,100 people. That they beat the League Two leaders (and eventual champions) 3-2 was an even greater surprise. It didn’t feel much like the FA Cup was in terminal decline that day.

Of course, nostalgia wears rose-tinted spectacles and much of the pageantry which accompanied the FA Cup final looks hokey to modern eyes, but a piece of silverware is a piece of silverware and Leicester City supporters will have their own stories to tell about what it means to win this competition for the first time, after more than 100 years. And tradition does still count for something; it’s an arm that stretches back a century and a half to a world almost unrecognisable to that of today, but also to a world which created the game that we still play today.

Can the FA Cup ever matter again, as much as it used to? Almost certainly not. Attitudes change over time and that ship has probably sailed, while it’s also worth remembering that many of the claims of its vast global reach were also almost certainly vastly overstated. For the biggest clubs, the Premier League and the Champions League are now the ultimate aim, while other Premier League clubs know that, if they have to prioritise between winning the cup or staying up, keeping that television money flowing is what really counts.

But even the matter of whether something ‘matters’ or not – or even whether mattering, well, matters – is a nebulous idea. Television audiences are down across the board since 1970. That’s a general trend which far out-strips football. And although many seem happy to extrapolate that because the FA Cup doesn’t matter to them, it doesn’t (or shouldn’t) matter to anybody, in an era when football is so stuffed with its own self-importance, the idea that actually winning a trophy somehow ‘isn’t important’ feels increasingly perverse. Perhaps those prioritising future television revenues over that exulted feeling that comes with seeing your team win a cup should, well, lighten up a bit? It’s fine to enjoy something for the sake of enjoying it. That dramatic music on Sky Sports is there for dramatic effect. Stop taking it so damn seriously.

Increasingly, the shoulders of supporters from the lower-division supporters drop as we approach the third round and the annual plethora of voices telling us how little any of this matters, as though we hadn’t been pootling along enjoying it all perfectly nicely for the previous few months before they turned up. There can be little doubt that the celebration police will be out in force after this year’s match is decided, chiding those who choose to enjoy their team winning.

But the FA Cup doesn’t struggle now because it hasn’t changed enough, and it wouldn’t have benefited from being preserved in aspic in 1992, either. It struggles now because it falls between these two stools. Tradition has been chipped away, but nothing of substance has been put in place to replace what’s gone. A complete revamp of the competition – yes, including finding a way of playing semi-finals somewhere else again – might work, but it would have to be a complete blank slate and they’d have to get it right at close to the first attempt, or we’d end up back where we started, only likely worse off. And regardless, the mechanism of the actual competition matters little in comparison with the attitudes of those watching or commenting upon it.

It doesn’t really matter how important the FA Cup is as part of Liverpool’s quadruple, but it does matter that it’s a part of it. Liverpool could end this season with just a Carabao Cup to show for a punishing schedule, while Chelsea are under new ownership and trying to look forward after a testing couple of months. Both clubs have something to lose and both have something to win, and that is enough for it to matter, because the FA Cup, the oldest football competition on this planet, is a trophy that is there to be won and there to be lost. The winners will feel joy and the losers will feel a sting with their defeat, and that feeling is something that can never be entirely scrubbed from football, even if many of the game’s biggest priorities have changed drastically.