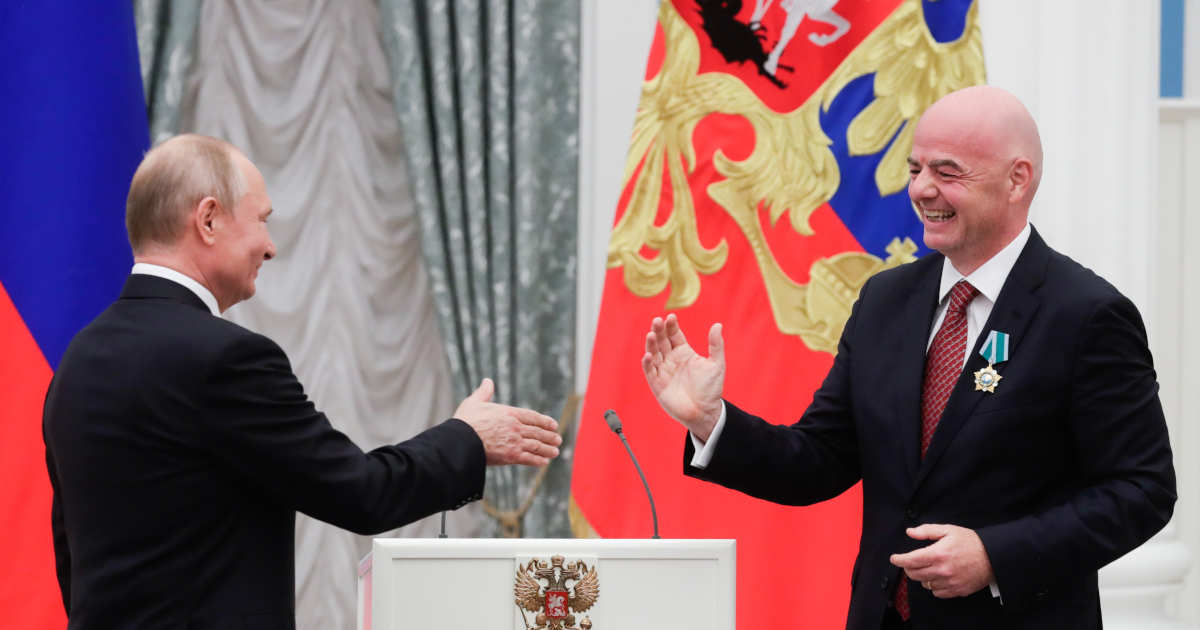 A mealy-mouthed response to the escalating international situation will only damage FIFA, and this might take the 2022 World Cup with it.

‘If someone shows you who they are, believe them the first time,’ is a quote from the American poet Maya Angelou which has been at the forefront of many people’s minds since Russia decided to launch its invasion of Ukraine. For years, football has found itself increasingly blinded by the glare of all that money, and we chose to embrace it regardless of the moral consequences, to ignore the origins of that money and to dismiss the reasons why it was being spent here. And few have been as involved in that funnelling of Russian money into football than the world game’s governing body itself: FIFA.

The road to Qatar 2022 hasn’t quite reached its final destination and in Europe there are still a lot of qualifying matches to play. Among the teams due to be taking part are Russia. Under normal circumstances, they would be playing Poland in the first of two rounds of play-offs on March 24, with the winners facing Czechia or Sweden five days later for a place in the finals. But, completely understandably, there aren’t many international teams in Europe who want a great deal to do with Russia, and a joint statement issued by the Polish, Swedish and Czech FAs made this clear:

It took FIFA five days from the start of the invasion to make an announcement that caused understandable outrage around the world. The match between Poland and Russia would go ahead, but at a neutral venue and with no spectators. Russia would also have to play under the name of the ‘Football Union of Russia (RFU)’. No Russian flag would be flown, nor would the anthem be played.

They added that they would be willing to consider further actions, including expulsion from the World Cup, should ‘the situation not be improving rapidly’. They said they had already ‘been in dialogue’ with the Polish FA about the match, having ‘taken good note of the positions expressed via social media’.

Well evidently they hadn’t taken enough ‘note of the positions expressed via social media,’ because the Polish FA issued a further statement almost immediately upon FIFA’s acquiescence in which they further lambasted the governing body over their lack of meaningful action. ‘FIFA’s decision today is unacceptable to us,’ they said, adding: ‘In the situation of war in Ukraine, we are not interested in the game of appearances. Our position remains unchanged: the national team Polish will not play against Russia in the play-off match, regardless of the name of the Russian team.’

Opposition has continued to swell elsewhere, too, with the English FA issuing a statement in which they said: ‘The FA can confirm that we won’t play against Russia in any international fixtures for the foreseeable future.’ The Football Association of Wales followed suit, while Noel Le Graet, head of the French Football Federation, told Le Parisien: “The world of sport, and especially football, cannot remain neutral. I certainly would not oppose the expulsion of Russia.”

FIFA, for their part, have only been able to offer the retort that they are ‘continuing to monitor the situation’.

This is clearly an untenable position for FIFA to cling onto. What happens if (or when) these three nations refuse to play Russia in the play-offs? Does the ‘Football Union of Russia’ get a free pass to the finals? And if so, do they seriously think for one single second that even the amount of unhappiness at this tournament being played in Qatar won’t be dwarfed by the scale of anger at Russia being allowed to compete? What happens when the three teams they’re drawn against in the group stages also withdraw? What happens when others do as well? In short, it’s almost impossible to see this World Cup even going ahead unless FIFA change their course as a matter of urgency.

None of what any of this says about FIFA is very complimentary. After all, it’s hardly as though warnings about getting into bed with Russia weren’t being made loud and clear before that tournament even started. Gianni Infantino said at the time that: “A lot of preconceived ideas have been changed because people have seen the true nature of Russia.” Infantino was awarded the Russian Order of Friendship by Putin in May 2019. At that time, he told Putin: “You welcomed the world as friends, and the world has created bonds of friendship that will last forever.”

How’s that one working out for you now, Gianni?

The community surrounding the game should have one eye on the future and it’s not difficult to envisage a situation in which, say UEFA and CONMEBOL – whose relationships with FIFA are already at breaking point over the biennial World Cup plans – decide that perhaps this is the right time to withdraw from a global game which seems to exist as much to promote despotic regimes as to promote football.

These are disturbing and frightening times, to the point that we may all be relieved if the 2022 World Cup takes place at all because that would mean that the northern hemisphere of this planet hasn’t been reduced to a smouldering, radioactive crater. In some respects, Infantino’s response is all the evidence that you need of why dictators involve themselves in sportswashing in the first place. Even now, as tensions rise to a level not seen in decades, the body that claims to speak for all of football remains on the fence, keeping their fingers crossed that people who have shown no signs of displaying good intentions will somehow be pressurised into doing so. It’s at best craven and at worst hopelessly corrupt; it will not be forgotten.