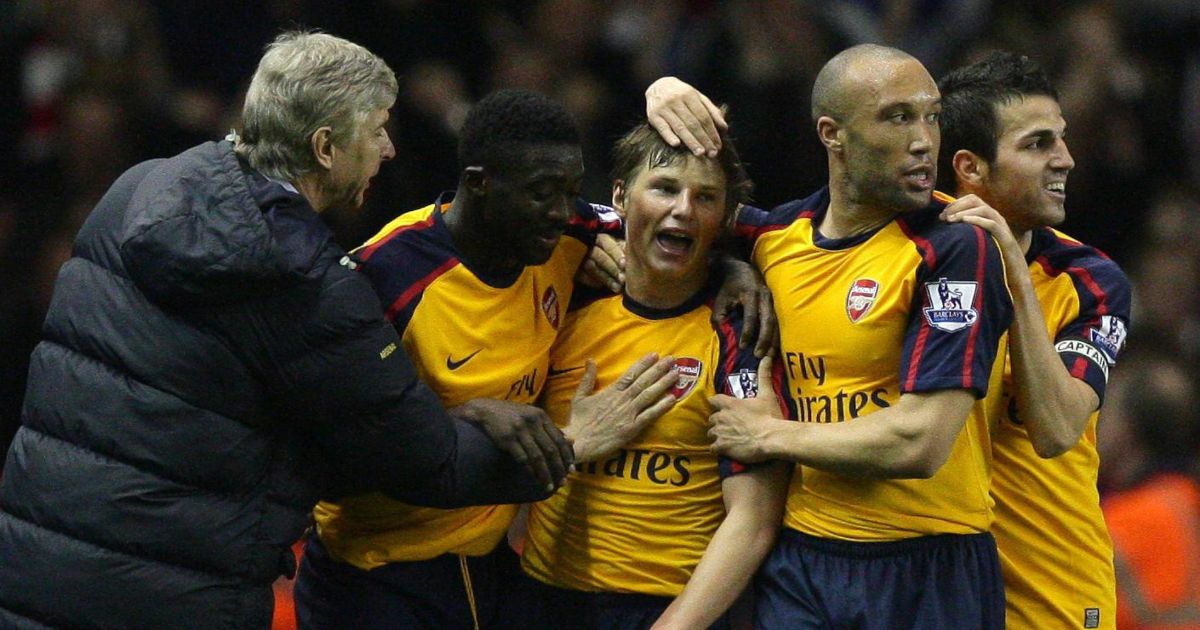 Phil Foden invited Liverpool back to his Icelandic hotel on Sunday afternoon to have his way with them. He is a big old winner. But where did his display rank in terms of the best individual performances by an away player at Anfield in Premier League history? This lot take some beating…

Didier Drogba (Liverpool 1-4 Chelsea, October 2005)
It is a well-known fact that Liverpool and Chelsea players saw more of each other than they did their respective families in the mid-2000s. An enduring rivalry was born from their incessant meetings, of which there were 24 from the start of the 2004/05 season to the end of the 2008/09 campaign.

Despite playing each other 4.8 times per season between those two points, it was rare that games would include more than a couple of goals, never mind be settled by such a margin. There were four goalless draws, seven 1-0 wins and a couple of 1-1s before that baffling, feud-ending 4-4 draw at Stamford Bridge in the Champions League quarter-finals. But never when Jose Mourinho and Rafa Benitez shared a begrudging handshake were the two evenly-matched sides so disparate than in the aftermath of Liverpool’s European coronation.

Liverpool and Chelsea played seven times in 2005 alone, Premier League formalities slotted in between a pulsating League Cup final, a two-legged Champions League semi-final and a couple of group games in the continent’s premier competition. Those latter matches both finished 0-0 as Jorge Valdano’s sh*t on a stick prophecy was realised, with that most rare of results – a 4-1 away win at Anfield – sandwiched in between.

Chelsea had started their title defence with seven consecutive league victories. Liverpool’s post-Istanbul haze meant they drew four of their opening five games in a season that began in July. Didier Drogba preyed on that sense of weakness in a dominant performance akin to his UEFA Cup display against the Reds for Marseille a year prior.

The Ivorian was brought down by Djimi Traore for a penalty Frank Lampard duly converted after 26 minutes. A quarter of an hour later, Drogba thoroughly exposed the struggling Sami Hyypia’s shortcomings to assist for Damien Duff to cancel out Steven Gerrard’s equaliser. By the hour mark Chelsea were in control, their centre-forward squaring for Joe Cole to make it 3-1. By the time Drogba’s low cross was converted by Geremi after Arjen Robben’s miscue, both Traore and Hyypia had been substituted as a result of his torment. Outside of cup finals he has rarely been so effective.

Andrey Arshavin (Liverpool 4-4 Arsenal, April 2009)
When Julio Baptista put four past Liverpool in a 2009 League Cup quarter-final, he did so facing a team featuring Lee Peltier, an even older Hyypia, Gabriel Paletta and Danny Guthrie, among other luminaries. Andrey Arshavin plundered his quartet of goals against a Reds side at the height of its powers two years later.

Liverpool had won five consecutive Premier League games to keep pace with Manchester United atop the table, a point behind having played an extra match. Victory at home to Arsenal, unbeaten in 18, would shift the title momentum in their favour heading into the final stretch.

The definitive A-Z of the greatest alliterative footballers

But Arshavin had other ideas. He dispatched Cesc Fabregas’s centre to open the scoring, only for Fernando Torres and Yossi Benayoun to combine to put Liverpool 2-1 ahead on the hour. The Russian then leapt into action, capitalising on Alvaro Arbeloa’s uncertainty to burst forward and lash past Pepe Reina, accepting Fabio Aurelio’s misguided assist three minutes later to complete his hat-trick. Torres then made it 3-3 but as the hosts pressed for a crucial winner, Theo Walcott led a counter-attack that Arshavin completed with a venomous strike.

Benayoun found a stoppage-time equaliser that put Liverpool above United on goal difference by virtue of having played two games more, but Arshavin had laid bare their deficiencies in 90 ruthless minutes. “If you look at the stats, it was my best game. But in terms of playing style, I had some other games that were much better,” he later suggested in quite the humblebrag.

Manuel Lanzini (Liverpool 0-3 West Ham, August 2015)
The latent obsession Liverpool have long harboured over Manuel Lanzini dates back to the first Premier League start of his career. The Reds were torn asunder by West Ham in the dying throes of Brendan Rodgers’ managerial reign, Dimitri Payet and Diafra Sakho benefiting from the tenacity and skill of their new South American teammate.

Lanzini had joined West Ham on a season-long loan that Davids Gold and Sullivan almost had to make permanent in light of his full debut, lest they risk Mark Noble having to turf out any protesting pitch invaders. The Hammers captain even scored on the back of Lanzini’s fine work at Anfield in August 2015, such was his effervescence.

The Argentinean opened the scoring in the 3-0 win, later robbing Dejan Lovren close to the corner flag in the build-up to Noble’s effort. Sakho completed the rout shortly after Lanzini was substituted to rapturous away applause, having completed eight tackles in an irresistible showing.

Peter Ndlovu (Liverpool 2-3 Coventry, March 1995)
For more than 33 years a visiting player had not scored a league hat-trick at Anfield. Terry Allcock’s treble in an eventual 5-4 defeat for Norwich had stood the test of time until relegation-battling Coventry headed to Merseyside on one fateful evening in March 1995.

This game and the ones either side of it neatly summed up Liverpool at the time: their defeat to a limited Coventry side came in between 2-0 victories over both Newcastle and Manchester United as Roy Evans struggled to marry his side’s quality with consistency.

He had tried to address that issue the previous summer, targeting 21-year-old Peter Ndlovu in an effort to partner him and Robbie Fowler up front. That move proved unsuccessful and Ian Rush, then in his mid-30s, would stay for another couple of years.

Liverpool could not possibly have expected their failure to procure Ndlovu to backfire so spectacularly. The first African player in Premier League history was hardly a prolific marksman yet one game was enough to establish his name in footballing folklore.

A fine back-post finish and a penalty granted the Sky Blues a two-goal lead they would hold until Jan Molby’s contentious 77th-minute spot kick. Those expecting a subsequent Liverpool onslaught as they fought to preserve a fading title challenge did not foresee Ndlovu collecting the ball around 40 yards out on a disastrous Anfield pitch, before twisting and turning Neil Ruddock and producing a razor-sharp finish for his third.

“It was a shambolic display,” John Scales remembered 25 years later. Ndlovu was on hand to ensure it was ruthlessly and suitably punished.

Jurgen Macho (Liverpool 0-0 Sunderland, November 2002)
If there is one thing supporters of every club can agree on, it is that goalkeepers play better specifically against their team. It is a phenomenon shared across fanbases: shot-stoppers having blinders in the face of one particular opponent’s attacking onslaughts before fading back into relative obscurity immediately thereafter.

Liverpool are no different. Their pantheon of No.1 nemeses includes Maik Taylor, Ali Al-Habsi and Adam sodding Bogdan. But none were quite as bemusingly effective as Jurgen Macho for Sunderland in late 2002.

In the midst of a historically dreadful season, Sunderland managed to avoid Premier League defeat to just two sides. They held Blackburn to 0-0 draws in August and January, while taking four points from Liverpool in the space of as many weeks.

Gavin McCann and Michael Proctor scored in what would be their last victory of the campaign shortly before Christmas, yet the stalemate at Anfield a month prior was every bit as surprising and impressive. Liverpool had 21 shots to Sunderland’s zero yet simply could not beat their Macho man.

The Austrian had only been given his first-team chance because of an injury to Thomas Sorensen, with primary back-up Mart Poom also unavailable. But Macho snatched the opportunity with saves from Michael Owen and Danny Murphy to thwart the title hopefuls, the dropped Steven Gerrard watching from the bench.

Macho’s reward was a move to Chelsea the subsequent summer. “They defended in an heroic way. I’m sure their goalkeeper has nine lives,” was the assessment of Gerard Houllier. Sunderland manager Howard Wilkinson was somehow less glowing in pointing out that Macho “would have struggled to catch a beach ball” until a recent return to form.