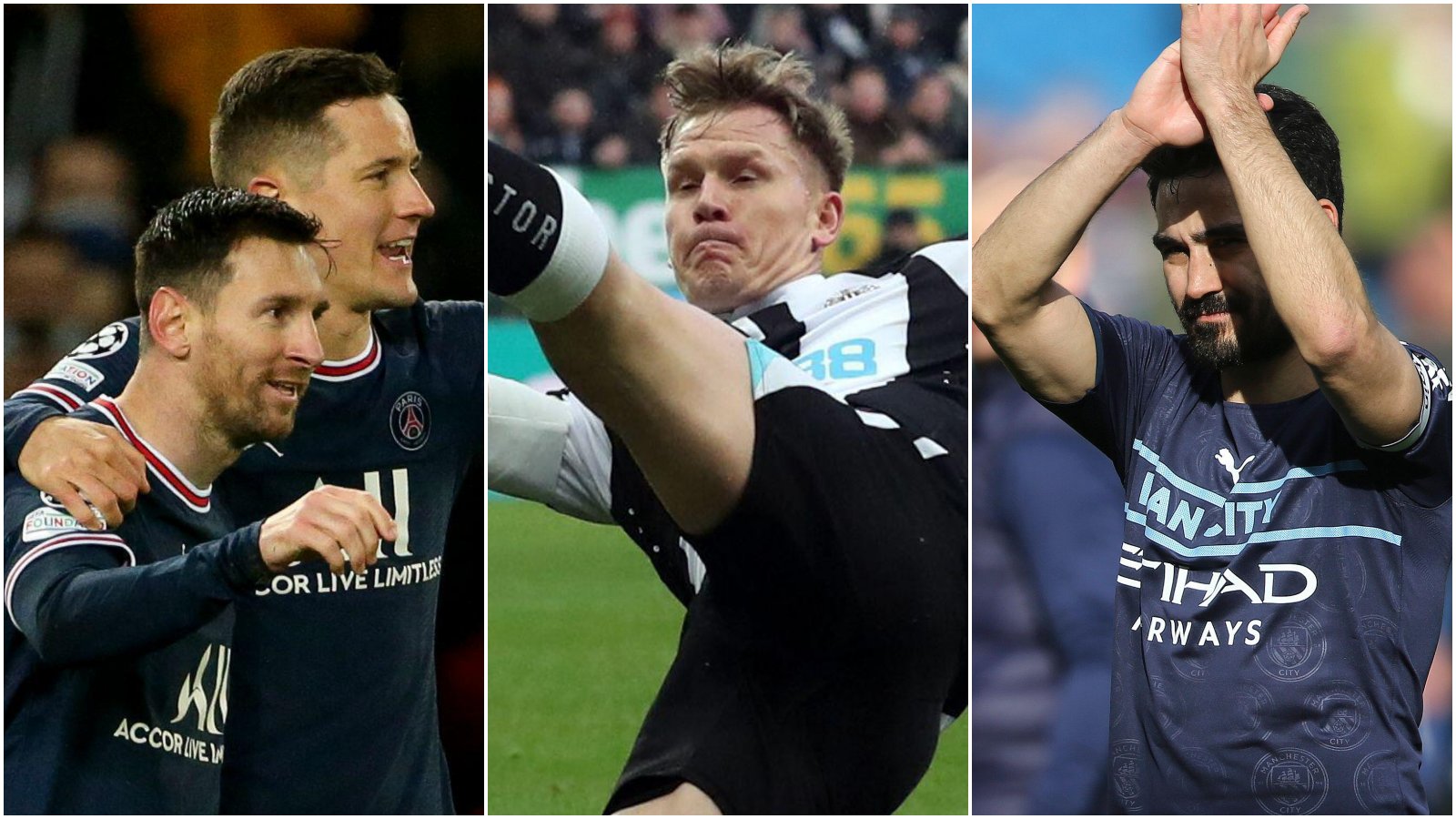 Man City and Liverpool have the two most important players in Europe’s top five leagues. Newcastle boast two of the worst statistically.

Here are the five best and worst players in the Premier League, La Liga, Serie A, the Bundesliga and Ligue Un, based purely on PPG. The minimum bar to qualify is 15 league appearances, each at least 30 minutes.

Fifth best: Dani Carvajal (Real Madrid) – 2.57
The reported interest in Chelsea right-back Reece James perhaps reflects a sustained fall in the stock of Dani Carvajal, yet Real Madrid still seem reliant on the Spaniard. While Karim Benzema and Luka Modric bask in their Indian summers, the comparatively callow Carvajal has assumed a sort of hybrid defensive role at the Bernabeu. He remains the Champions League semi-finalists’ starting right-back, but has capably filled in on the left and even centrally in times of emergency, including for the final half-hour against Chelsea at the Bernabeu after Nacho’s late injury.

Carvajal was devoured by Kylian Mbappe in the previous round, of course, with many demanding Madridistas still holding him to account for his part in the 4-0 thrashing by Barcelona in March, during which he was substituted at half-time. That does, however, remain Carvajal’s only La Liga defeat since February 2020.

Fifth worst: Matt Ritchie (Newcastle) – 0.38
By contrast, Matt Ritchie has not taken part in a Premier League win since the final game of last season. Thirteen Newcastle starts for the 32-year-old have delivered eight defeats and five draws; two substitute appearances have resulted in 4-0 and 3-1 losses; one game as captain ended in FA Cup ignominy at home to Cambridge United.

It was assumed by some that the appointment of Eddie Howe and the rekindling of their relationship at Bournemouth might aid a career renaissance for Ritchie but, due to coronavirus and injury, he played far more often under the cowardly Steve Bruce at the start of the season. His last league match for the Magpies came on December 19. The manager insisted recently the Scotland international still had “a big part to play on and off the pitch” but it doesn’t half feel like that role will involve far more of the latter. He is almost definitely the one that organises those p*ss-boiling post-match dressing-room celebration photos.

Fourth best: Ander Herrera (Paris Saint-Germain) – 2.59
Well alright. It’s not exactly the first name that comes to mind when predicting points-per-game dominance but this sh*thouse was built on solid foundations. It should be noted that Ander Herrera has only started 11 Ligue Un games this season but nine wins, a pair of draws and even five goal contributions in that period means the 32-year-old would probably still slot into a Manchester United midfield he left almost three years ago after realising that Eden Hazard was off to Real Madrid, signalling that his work as the Premier League’s most diligent man-marker was complete.

Herrera also remains level with Lionel Messi on three league goals this campaign, having been intermittently sidelined with hamstring and eye problems. The Argentinean’s PPG is a quite embarrassing 2.19.

Fourth worst: Harold Moukoudi (Saint-Etienne) – 0.37
Middlesbrough supporters will fondly remember each of the 720 minutes Harold Moukoudi spent on loan in the Championship from January to July 2020. His eight games on Teesside were comprised of five defeats, two draws and a solitary victory against relegated Charlton, neatly prefacing a forgettable time back at parent club Saint-Etienne.

The French club finished mid-table in 2020/21, Moukoudi winning on only one of his first 13 appearances before ending strong with four victories from six. But this season has been disastrous: Saint-Etienne are 17th, a point above the relegation zone, with the league’s second-worst defensive record. Moukoudi has missed all seven of their wins and helped keep only one clean sheet.

Third best: Manuel Neuer (Bayern Munich) – 2.60
No longer widely considered the leader in his particular field, the aura of Manuel Neuer might ordinarily have faded at 36 after more than a decade performing at the highest level. But breaking the record for most career Bundesliga wins last month indicates a goalkeeper still rushing out rather than slowing down. Only Eintracht Frankfurt and Augsburg have beaten Bayern Munich in the league when their captain has been present this season, and no keeper has kept more clean sheets in Germany’s top flight than his 10.

Oliver Kahn, Bayern CEO and Neuer’s predecessor for club and country, has already confirmed that talks have been held to extend the keeper’s contract beyond its current expiration of summer 2023. Considering he has the best personal goal difference of any individual players throughout Europe’s top five leagues (+59) and is on course to seal a dectet of consecutive league titles, you can understand why.

Third worst: Isaac Hayden (Newcastle) – 0.36
When Isaac Hayden last featured in a Premier League win, Manchester United were second and two points behind leaders Manchester City, Liverpool were gripped by an injury crisis and battling Leicester, West Ham and Carlo Ancelotti’s Everton for a Champions League place, Jose Mourinho and Sam Allardyce were managing in England and sportswashing was generally only something a parent did after double P.E. Newcastle held on to a 3-2 win over Southampton for dear life and pushed further away from relegation as Hayden ably manned central defence.

The St James’ Park takeover never looked too bright a prospect for the 27-year-old, whose position was under almost immediate threat from a surge in investment. Much like fellow outcast Ritchie, his last game for the club was that humbling by Manchester City in December, after which knee surgery and his expulsion from Newcastle’s Premier League squad has slightly undermined Hayden’s chances of a return. This is Bruno Guimaraes’ world now.

Second best: Ilkay Gundogan (Manchester City) – 2.62
It was before the Premier League draw with Liverpool that Ilkay Gundogan noted “there is no potential to do mistakes” for either side in their respective pursuits of the title. Pep Guardiola might be minded to take that on board and keep the German midfielder as fresh as possible, considering Manchester City’s record with and without him. Across all competitions, Gundogan has started 27 games, won 20, drawn three and lost four. Tottenham are the only side to vanquish the champions when the 31-year-old has featured in the Premier League this season – and they did it twice.

The imminent departure of Fernandinho might only enhance the importance of Guardiola’s first ever signing at the Etihad. The next best Manchester City player in PPG terms is Bernardo Silva, whose 2.47 does not seem like a substantial decrease but represents a difference of five points in comparison to Gundogan when extrapolated over an entire season.

Second worst: Billy Gilmour (Norwich) – 0.35
‘Look how they massacred my boy,’ Frank Lampard definitely said. ‘But no, Billy Gilmour’s loan to Norwich has negatively impacted all parties and is a reminder that while Chelsea have effectively gamed the loan market in recent history, not every decision made has been in the best interests of the player involved and a 20-year-old’s career has been unnecessarily damaged in this particular instance.’

Gilmour was farmed out to Norwich for Premier League experience. He has had his fair share of that, starting 17 games. But almost half of those were in eight consecutive matches over five weeks from late November to just after Christmas, meaning the rest of his season has been spent in and out of the side, benched and consigned to cameo roles, cherished and discarded by Daniel Farke and Dean Smith, and used as a pawn by Canaries fans, Chelsea supporters and certain corners of the media to further agendas. Gilmour might look back on his time at Carrow Road fondly and figure it helped him mature, but he won twice as many Premier League games playing 259 minutes for Chelsea last season than he has in 1,526 minutes for Norwich this campaign.

I never want to see Gilmour in a Norwich shirt again. He offers nothing except a few extra £ saving by playing him.

Placheta is so far off this level it’s painful.

To bring both on at the same time threw the game away. #ncfc

Best: Thiago (Liverpool) – 2.63
The Manchester City draw on April 10 was the first Premier League game Thiago has started and not won since May, ending a run of 17 consecutive victories in which the Spaniard has taken the knee at kick-off and reduced the opposition to both of theirs by full-time. The assumption may be that Liverpool are dominant in attack when Thiago features but the balance and pressure he guarantees is actually best underlined by the fact they have only conceded five times in the league with him on the pitch. Kevin de Bruyne and Gabriel Jesus at the Etihad, Jonjo Shelvey and Demarai Gray in December and Kurt Zouma in November have wrestled the ball from the midfielder long enough to score.

Reduced to tears at having to sit out the League Cup final a couple of months ago, Thiago’s fitness will be integral to Liverpool’s prospects of adding an unprecedented three more trophies to their cabinet this season. It is a far cry from his struggles a year ago as a supposed luxury signing. Juan Sebastian Veron could never.

Worst: Daniel Bachmann (Watford) – 0.27
It is weird that Xisco Munoz started the campaign as Watford’s manager; it is downright bizarre that Daniel Bachmann was his first-choice goalkeeper. The 27-year-old shipped seven goals in the club’s opening four Premier League games before giving way to the Cycling GK. Ben Foster’s winter injury issues gave Bachmann another chance that he proceeded to fumble with both hands: he started all of the Hornets’ six-game losing run after that Manchester United victory, conceding 16 goals in the process, then briefly returning to lose 3-0 to Norwich in late January. That was one of the Austrian’s two Watford appearances in 2022, the other coming in a 4-1 FA Cup hammering by Leicester.