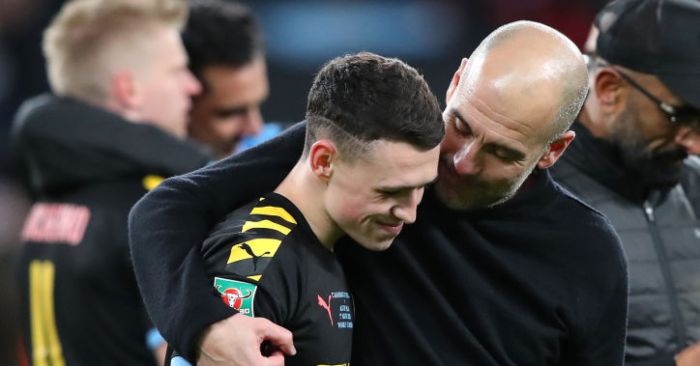 Pep Guardiola’s side could start next season as reigning Premier League champions, despite sitting 25 points behind Liverpool as things stand. A small, falsely gratifying, solace after what has been a season to forget on and off the field for Manchester City. Whether they are playing Champions League football or not, the next transfer window looks set to be a busy one for Guardiola, as he looks to rebuild his squad. We’ve looked at five players he could do without, and here are five he can build his team around…

Kevin de Bruyne
De Bruyne is the best player in the Premier League. The Belgium international has eight league goals and 17 assists; afford him space and he will punish you. Particularly in that space dropped in off the right channel, where he will either whip in a rasping cross off his perfect right foot or cut inside and hit a shot with his deplorably weaker left, which happens to be better than most players’ first choice. As is the case with the majority of the players on this list, a lack of Champions League football could be a real problem. As De Bruyne showed in City’s 1-0 away victory in the Bernabeu, he deserves to be mixing it with the best teams in Europe.

Raheem Sterling
11 goals in his first 19 Premier League games, but none since – Sterling is knackered. But recent form shouldn’t detract too much from a wonderful season. The England international is one of Guardiola’s greatest triumphs, transforming him from a winger with little hope of end product, to a forward frustrated to have missed a half-chance. There has been some unsubtle flirting between Sterling and Real Madrid, and with the obvious ambition of the 25-year-old, City may struggle to fend suitors off. But Guardiola should do everything he can to keep the player he’s moulded, and Sterling may feel he owes his boss another season to repay the faith he’s shown in him.

Rodri
Rodri may have been expecting to spend more time on the bench this year. But with defensive woes following injury and summer inaction causing Fernandinho to drop deeper, the 23-year-old has been thrust into the role Guardiola may have been hoping to ease him into. Rodri may end up playing less next season, with Guardiola sure to splash on defensive reinforcements, allowing Fernandinho to return to his preferred holding midfield role. At 35 the Brazilian is showing no signs of ageing, but at least City know that’s one club legend they have already replaced.

Aymeric Laporte
Whoever is responsible for transfers made a grave error in not replacing Vincent Kompany, that much is clear. Even with Laporte, who is the other centre-back supposed to be? But Man City have won six and drawn one of the seven games Laporte has started in the Premier League this season, with five clean sheets among them. That’s 19 points that if you were to divide by the number of games and multiply – which Liverpool fans are very good at all of a sudden – would put Guardiola’s side just under three points off Liverpool after 29 games. As if that’s a viable way of proving anything…

Phil Foden
Foden is lazily lauded as David Silva’s long-term replacement. The 19-year-old is likely to get more of a first-team opportunity following the legendary Spaniard’s departure, but they are completely different players. Silva is all class and technique, whereas Foden has an arguably broader – if less polished – armoury. The academy youth product has that ability, like peak Jack Wilshere, to drift past opponents with the ball at his feet, and far more pace and energy than Silva to get around the pitch. Guardiola has urged patience, but Foden’s and our understanding will surely run out next season should he not be given the chance to fill David Silva’s boots… Oh shit, I’ve done it too.