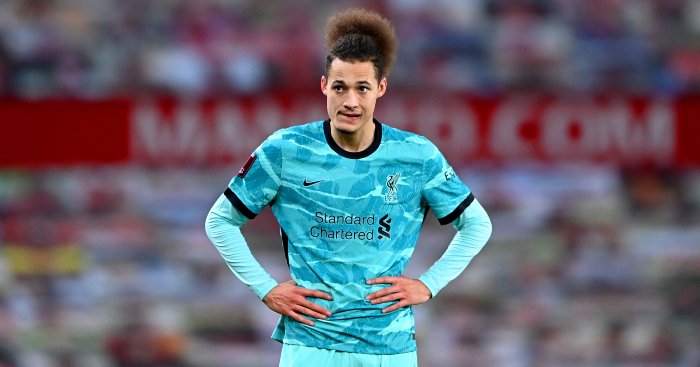 Timo Werner stands to benefit from Thomas Tuchel’s management at Chelsea. Some of these players could do with a fresh start of their own.

Rhys Williams
“There was a lot of good things and some mistakes around the goals,” said Jurgen Klopp, with one obvious perpetrator perhaps in mind. It was Rhys Williams who got himself into a bit of a tangle to let Marcus Rashford in for Manchester United’s second goal against Liverpool on Sunday.

The 19-year-old both is and was an easy target. Ole Gunnar Solskjaer clearly focused on countering down that side to capitalise on Trent Alexander-Arnold’s attacking forays. But equally, Liverpool’s more experienced players let the teenager down.

Take the first goal. As Paul Pogba and Donny van de Beek combined to smuggle the ball out wide to Rashford, Williams is moving to close down the forward. Mo Salah then ushers him away under the pretence that he will put pressure on the ball instead. Williams moves away to occupy the space Edinson Cavani runs into, Salah gives Rashford time and space to pick his pass and James Milner misjudges its flight to let Mason Greenwood in.

Even for the second strike, Williams is put under sudden duress after Thiago overruns the ball and Greenwood has an age to line up his angles and play Rashford in. The centre-half should do better yet the issues can be traced back far further than a simple failed clearance.

A mistake by Rhys Williams will get highlighted but to blame him is unfair. He’s a young lad who would never have imagined being in this position. The people who run Liverpool knew in November how the manager needed a central defender. Until it’s addressed, there’ll be more bumps

Williams actually fared well enough otherwise, winning as many headers as United combined and holding his own against seasoned internationals with Champions League pedigree. But the folly of Liverpool’s decision not to strengthen in defence has been exposed.

It is not a criticism to suggest he isn’t good enough for this level. He shouldn’t be. Not yet. Development paths are different for every player and expecting someone to slot seamlessly into one of the best teams in the world with a midfielder for a defensive partner after spending most of the year playing non-league football is ludicrous.

Liverpool are actively damaging Williams’ progression the more they throw him in at the shark-infested deep end. They need a short-term centre-half fix for his long-term career aspirations as much as anything else.

Willian
The mistake was not necessarily to sign him. Transfers are inherent gambles, the success of which is based on a number of different uncontrollable variables. Every manager has a handful of signings they will look back on with regret, unable to explain how or why they failed. Not even years of meticulous scouting and planning can guarantee value for money.

The error is only in persisting with something that clearly doesn’t work. Over the course of 90 minutes against Southampton, Willian proved that he is no longer worthy of the faith shown by Mikel Arteta and Arsenal technical director Edu. It is not even the first time that’s happened in the FA Cup this month.

The drop-off in quality from Emile Smith Rowe, Bukayo Saka and even Alexandre Lacazette is laughable. Eddie Nketiah at least has the excuse of relative inexperience, while Nicolas Pepe is producing decent enough numbers – five chances created on Saturday is an improvement. But Willian simply cannot continue to be given opportunities he insists on wasting.

Arsenal have scored a single goal – a penalty – in the Brazilian’s last 472 minutes on the pitch. Willian is not solely to blame for that but as the handsomely remunerated, trophy-hoarding creative fulcrum, the burden should fall mainly on him. With exit from both domestic competitions secured, Arteta cannot afford to keep relying on someone who fails to repay that trust.

Aaron Ramsdale
There was no opportunity to waste with regards to game time for Aaron Ramsdale. He has played every Premier League and FA Cup minute of a historically bad season for Sheffield United. But the chance to keep a second clean sheet in 21 appearances wriggled underneath him against Plymouth.

Chris Basham was the player Byron Moore pickpocketed before evading John Egan and centring for Panutche Camara to score. Yet questions ought to be asked of not only Ramsdale but Chris Wilder for even playing him at home to a League One side when the keeper could perhaps have benefited from a breather away from the scorching spotlight.

That is hindsight at its most egregious but it sends the wrong message to both Ramsdale and his peers if he continues to be selected in spite of poor form. There needs to be a meritocracy at some point, chances for Wes Foderingham, Michael Verrips or Simon Moore to at least show there are reliable alternatives if needed. Trying to play Ramsdale out of this rut is just further embedding him into it.

Michael Hector
That was not pretty. From reacting roughly 427 seconds too late to a standard run towards the front post, to bundling Matej Vydra over in the penalty area, to losing an aerial duel to Jay Rodriguez’s chest, to appealing every single Burnley goal that was covered in his fingerprints by raising a forlorn arm to the officials for no apparent reason, Michael Hector proved to Fulham why they were right to move on from him this summer.

Tosin Adarabioyo struggled at Craven Cottage, too, but has been central to their defensive improvement alongside Joachim Andersen. Scott Parker tried to counter the Dane’s absence by fielding a back three with Tim Ream at its heart but both he and Hector were painfully below par.

With regard to Hector, Fulham have conceded at least three goals in five of his six starts this season. The exception came against Championship strugglers Sheffield Wednesday in the League Cup, which is far more representative of the former Chelsea signing’s level.

Timo Werner
Recent developments could point to a potential period of prosperity after months of meandering for Timo Werner at Chelsea. There is a reason the Stamford Bridge hierarchy has put so much emphasis on replacing Frank Lampard with a German-speaking coach, and it isn’t to give tabloids more excuse to publish xenophobic arsewash if things go even vaguely wrong.

His last match under the manager that brought him to south west London actually represented a step in the right direction of sorts as part of a more fluid partnership with Tammy Abraham. Werner thrived as part of a forward pairing at Leipzig yet it took Lampard months to afford him that opportunity.

That is something for Thomas Tuchel to build on, although there is work to be done with Werner in terms of restoring his confidence first. The reaction to Simon Sluga’s penalty save was that of a player not short of application or desire but entirely shorn of belief. That needs to be rebuilt and Werner reminded of what made him so brilliant before he moves up this ranking.

Timo Werner's reaction after missing the penalty is just heartbreaking. He needs our support right now more than ever. pic.twitter.com/znwKbHb3F6