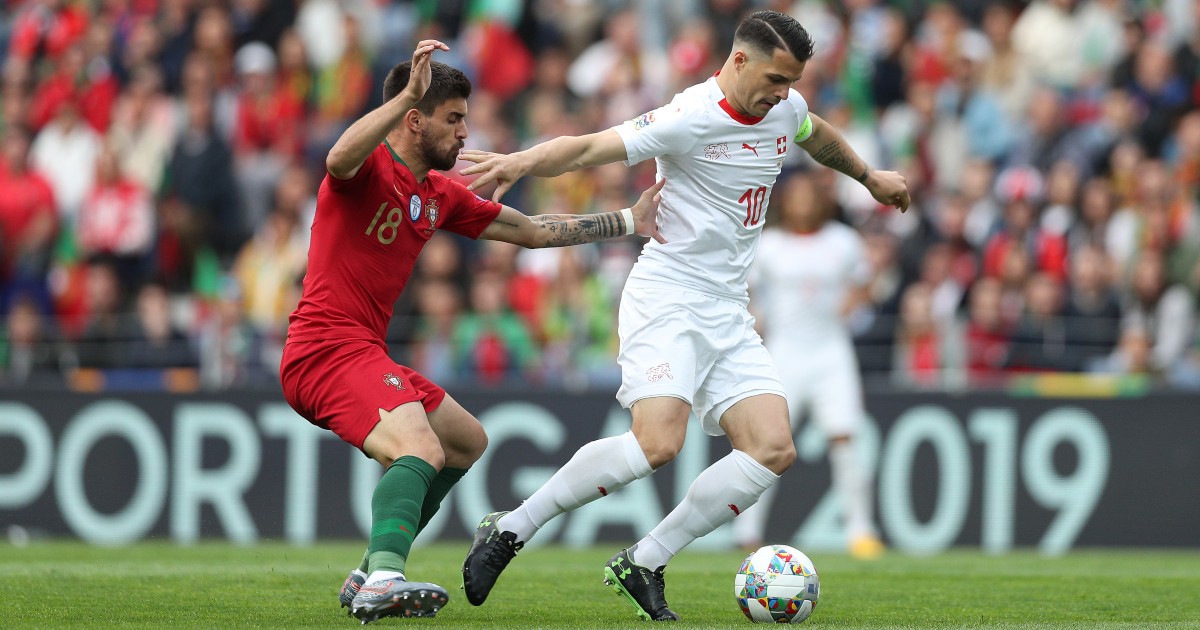 Arsenal want a fairly young deep-lying playmaker with Premier League experience to replace Granit Xhaka. These five must be considered.

Granit Xhaka is set to leave Arsenal after five years spent dividing the opinion of fans and pundits alike. His role in the team and the ability he possesses will be duly missed. Effective recruitment of a suitable replacement is of paramount importance.

The jury has been out on the 28-year-old ever since he arrived in 2016, from being handed the captaincy to living my personal dream of telling 60,000 Arsenal fans to simultaneously f*** off. He showed a lot of courage and character to come back from that.

I have assessed the options and put my top five picks together to prepare for life after Xhaka. The Gunners are in the market for a particular profile, that being a player with Premier League experience, aged between 23 and 25 and able to play the deep-lying playmaker role in Mikel Arteta’s system.

It is an underrated trait in the modern game, but fitness and availability are key to success in keeping results consistent.

Arsenal themselves were not particularly plagued with injuries in the season just gone by, but only Nicolas Pépé (47) and Bukayo Saka (46) made more outfield appearances than Xhaka’s 45. A suitable replacement for the Swiss needs to be a similarly hardy player who spends his time on the pitch and not the treatment table.

Ruben Neves
The first pick is an obvious one in Ruben Neves. Everyone who watches the Premier League knows exactly what the Wolves midfielder is all about. He is a leader with immense quality and the ability to score an absolute raker from time to time.

Having captained Porto at the age of 17 in the Champions League, Neves is a fine candidate to become one of the main leaders and figureheads of the dressing room.

Statistically, the Portugal international blows Xhaka out of the water in all departments and with him being four years younger it makes total sense to make this deal happen.

However, the club need to be wary of blowing their entire transfer budget on one player; anything over £30m would be too much for Neves with the alternatives available in the market.

Yves Bissouma
Seemingly a fan favourite pick to leave Brighton for London in the wake of Xhaka’s imminent departure, Yves Bissouma would be perfect. He would add some much needed energy, pace and defensive stability to a soft Arsenal midfield.

The Mali international has the most tackles (104) by a midfielder while he also boasts the fourth most interceptions in the Premier League for the 2020/21 season.

Above is the 24-year-old’s heat map for the entire campaign, highlighting his heavy involvement in Brighton’s play, spending his time in these areas breaking up opposition possession – and in particular the middle third.

For me, Arsenal should be breaking the bank to get a player of this quality through the door.

Andre-Frank Zambo Anguissa
Anguissa seems like a simple solution in the grand scheme of things; he fits the criteria of what Arteta is looking for but would also add more than what his predecessor offered.

One noticeable trait is his ball carrying ability, one thing that Arsenal have struggled with particularly this season. The best comparison would be Mousa Dembele, who was exceptional for years at Tottenham.

The 25-year-old has a deal that ends in 2023 which doesn’t give Fulham much leg room for negotiation and with their relegation to the Championship, it is more than likely that the Cameroonian will want to try his hand at a bigger challenge.

Despite his potential, it is important to remember the level is far less than what would be expected in N5. He would have to step it up if he moved.

Sander Berge
The Norwegian will cost in the region of £35m which would immediately create a stumbling block for Stan Kroenke’s penny-pinching tactics.

Nonetheless the 23-year-old would be a fantastic alternative in midfield. He is tall and rangey but no slouch. He has ball carrying abilities that the current crop don’t have.

He holds a wide set of attacking and defensive traits which would slot snugly into Arteta’s system but one must consider that he stood out in a Blades side that couldn’t kick their own arse, let alone those of other sides.

Joe Willock
Now for the man who set the league on fire in his recent loan spell at Newcastle, becoming the youngest player to score in seven consecutive Premier League games, equalling Alan Shearer’s record at Newcastle. How about that for goals from midfield?

You might argue his inclusion in this list of deep-lying midfielders is crazy but hear me out.

Should Arteta opt for the 4-3-3 formation, the system that the Spaniard wants to move to eventually, you could see a midfield trio being tried, thus giving Willock the freedom to express himself in an attacking sense. He played a hybrid of a number 8/10 role at Newcastle in which he would make late runs into the box for composed finishes, something Arsenal sorely lack.

The other benefits of giving the Englishman the opportunity is that he fulfils the homegrown quota and he obviously would not cost a transfer fee. Willock returning from loan would Feel Like A New Signing with his newfound confidence and the lack of midfield goals in the current squad is a huge concern. It would be a no-brainer to give him an opportunity to prove himself.

Xhaka will be missed, a superb servant to the club who was massively misunderstood by the fan base. But here’s hoping the future holds a different outcome for whoever comes next.