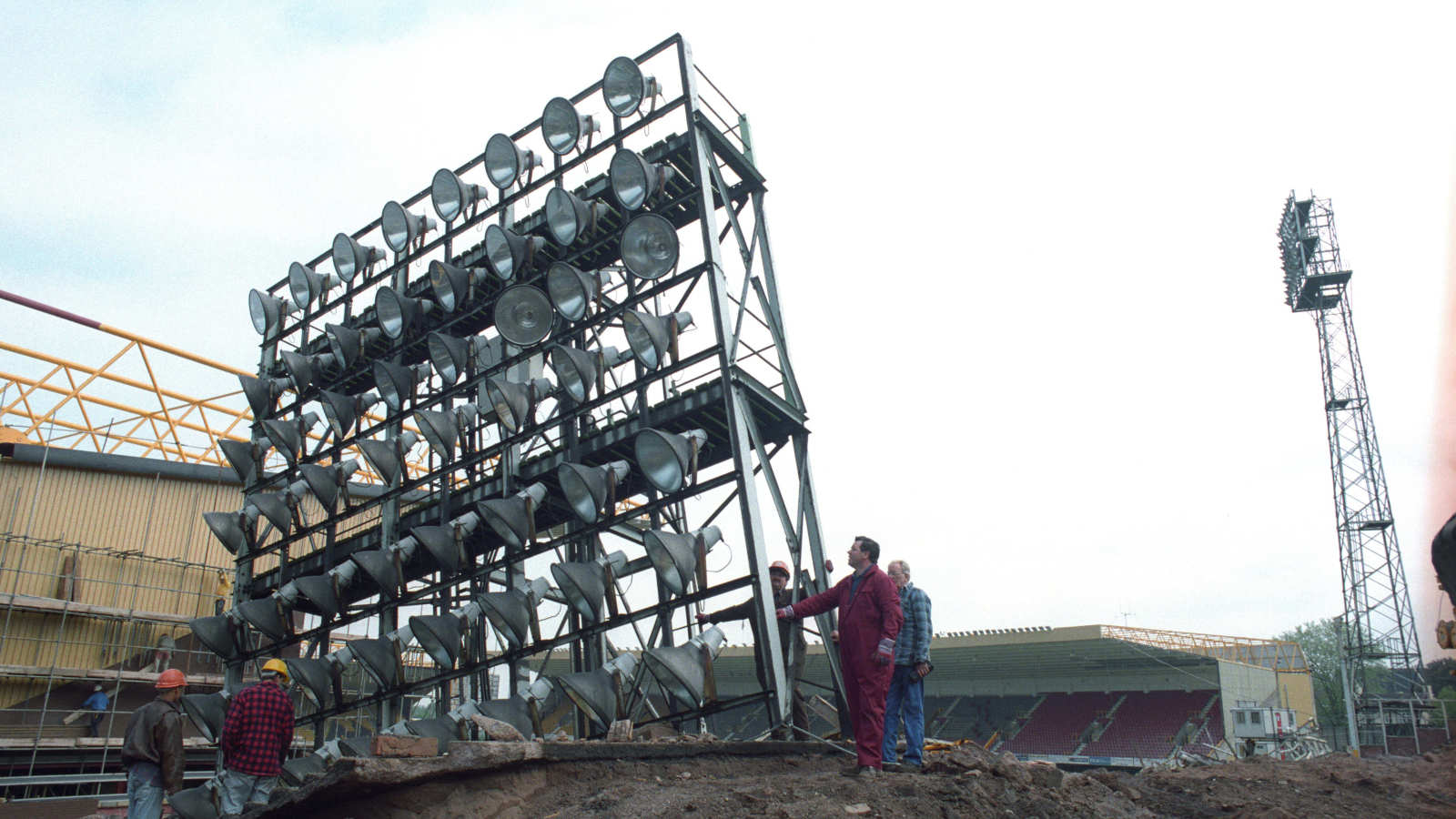 The 3pm kick-off finishing under floodlights during the winter are an English football tradition, but they may need to be sacrificed.

Some time in the distant past, a little over 20 years ago, I was talking to someone from a non-league football club about a game for which we had hired their pitch. At a point in the conversation, the subject turned to floodlighting and I, in all innocence, asked if he could switch them on a moment so I could see how they worked.

‘You’ve got to be joking’, was his reply. ‘It costs a couple of hundred quid just to switch these on.’

Some caveats are required here. I have no evidence that he wasn’t just saying that to shut me up (entirely plausible). Furthermore, with LED lighting, floodlights are considerably more energy-efficient than they were then, with many clubs having already replaced out of date, more power-hungry options.

But the fact remains that just staging a football match can be expensive – and it is about to get considerably more so.

The effects of the cost of living crisis on supporters have only barely been touched upon by clubs, but one area in which there has already been movement is on the subject of floodlighting matches. At the end of July, the Isthmian League – one of the regional leagues that make up the seventh and eighth tiers of the game in England – issued a statement confirming that clubs had been given permission to bring kick-offs forward during the winter from 3pm to try and limit the amount of money spent on utilities.

There are, of course, conditions. ‘Decisions should be made between both clubs, the League Office should be informed as early as possible, and changes should be publicised to ensure that players, officials and supporters can have time to make appropriate plans,’ according to their statement on the matter. But it was notable that a league had thought forward on this subject to the point of issuing such guidance before a ball was even kicked.

This subject is now starting to filter through to the EFL. With energy prices expected to treble or even quadruple over the course of the coming winter (newly-released plans for government assistance for business this winter are patchy), there is a growing feeling that matches cannot continue to kick off at three o’clock in the afternoon when the cost of doing so is prohibitively high.

Of course, this problem isn’t just limited to floodlights. Heating costs are also set to soar and this money can be saved by starting a little earlier in the day.

It certainly seems to be exercising clubs. A recent survey of 40 lower-division teams by Fair Game found that almost two-thirds of them would consider earlier kick-offs to reduce floodlight usage, while around 60% also admit they could need to halt ground improvements and 38 per cent ‘would look at cutting the non-playing staff’.

Speaking to the I last week, Bradford City CEO Ryan Sparks described the energy crisis as “potentially crippling,” adding, “We’re open to doing anything that will help us lower costs in what is an unprecedented situation.”

This sort of news may anger some traditionalists, and it has become a truth of the modern football world that the ‘traditional kick-off’ at 3pm on a Saturday afternoon has become something of a totem for those unhappy at the continual shifting around of kick-off times, usually for the benefit of broadcasters. But the 3pm kick-off time isn’t quite as universal and traditional as many believe.

Floodlights have a longer history in the game that most realise. The first reported match to be played under them was in 1878, a representative match played under gaslight between two Sheffield teams, but despite their relative success and continued experimentation, the FA banned clubs from playing under them in 1930.

The ban on floodlights was partially lifted by the FA in 1950. Midweek games at the time were played in the afternoon during the winter, and with full employment, industry could no longer afford to lose its workers to football matches. Not everyone was happy with this. Some clubs baulked at the cost of installing them – when Stockport County did it in 1956, the cost was £17,000, the equivalent to £477,000 today, allowing for inflation – while players were unhappy at working less sociable hours, a situation that was resolved only by offering them a bonus for playing night matches.

The Football League lifted its ban on them in 1956, but it still took more than a decade for all member clubs to have them installed, with Chesterfield being the last in 1967. In Scotland, Stranraer were the last League club to get them installed, and they didn’t do so until 1981. To that point, Saturday kick-offs during the winter were often earlier in the day, as early as 1.30pm.

But even this didn’t mean a complete uniformity of kick-off times. Some clubs kicked off at 3.15 – either due to the requirements of local industries or to coincide with last orders, at a time when pubs and social clubs still had to shut in the afternoon by law – while a couple played their weekend fixtures on Friday nights to avoid clashing with bigger rivals, such as Stockport County and Tranmere Rovers.

During the energy crisis of 1973/74, kick-offs were brought forward to save on costs by finishing in daylight hours.

There is no question that floodlit matches offer something special, and this was almost immediately picked up on when they started to become commonplace. When the Football League lifted its ban in 1956, the first match played under them was between Portsmouth and Newcastle United. The correspondent for The Times correspondent described it thusly:

‘In 20, even 10 years’ time, will all football be played under the stars and moon? There is much to recommend it. There is a dramatic, theatrical quality about it. The pace of the game seems accentuated, flowering patterns of approach play take on sharper, more colourful outlines. In the background of the night, the dark, surrounding crowd, half shadow yet flesh and blood, can produce the effect of a thousand fire-flies as cigarette lights spurt forth.’

So it does feel as though we could be about to lose something. There is something indefinably special about matches starting in daylight and finishing under the glow of floodlights with the crowd huddled together in the background. But it does also feel like kicking off at 3pm on a Saturday and finishing under floodlights is a luxury that many clubs will not be able to afford throughout this particular winter.

There’s even a case for saying that this flexibility should be more than just a temporary measure. That football clubs further down the pyramid lead financially precarious existences is well-known. Why not give them the opportunity to bring forward their kick-off times and save some money? Even if we ignore the current situation over prices, it would surely be better for the environment for more matches to kick off a little earlier on a Saturday afternoon and save the money of switching the floodlights on in the first place.

After all, the industries that depended on people working Saturday mornings are now largely gone. All that’s really left is the ‘tradition’ of it all, and that doesn’t feel like a good enough reason to continue with this practice if clubs are going to struggle with the cost of even putting games on.

But at the same time, it is important that fans aren’t inconvenienced further by all of this.

When the Isthmian League made their announcement during the summer, they were clear that ‘changes should be publicised to ensure that players, officials and supporters can have time to make appropriate plans’.

In his interview with the I, Ryan Sparks did point out that there are other potential issues with uniformly moving to earlier kick-off times. Overnight stays are another not insignificant cost below the top division, for example, and this would be required for some earlier kick-offs. It wouldn’t take a huge amount of imagination to perhaps limit them to matches where this was not going to be an issue if it was to become something more permanent.

There’s more that could be done. Grants could be made available for clubs to update facilities which aren’t as energy-efficient as they could be. The game could try to lower its dependency on midweek fixtures to fill gaps in the schedule. New grounds should be built in locations that are convenient for supporters rather than property developers. But for now, football needs to be more cognisant of these spiralling costs, and the result of all of this may well end up in the 3pm kick-off being sacrificed throughout the winter months at least.