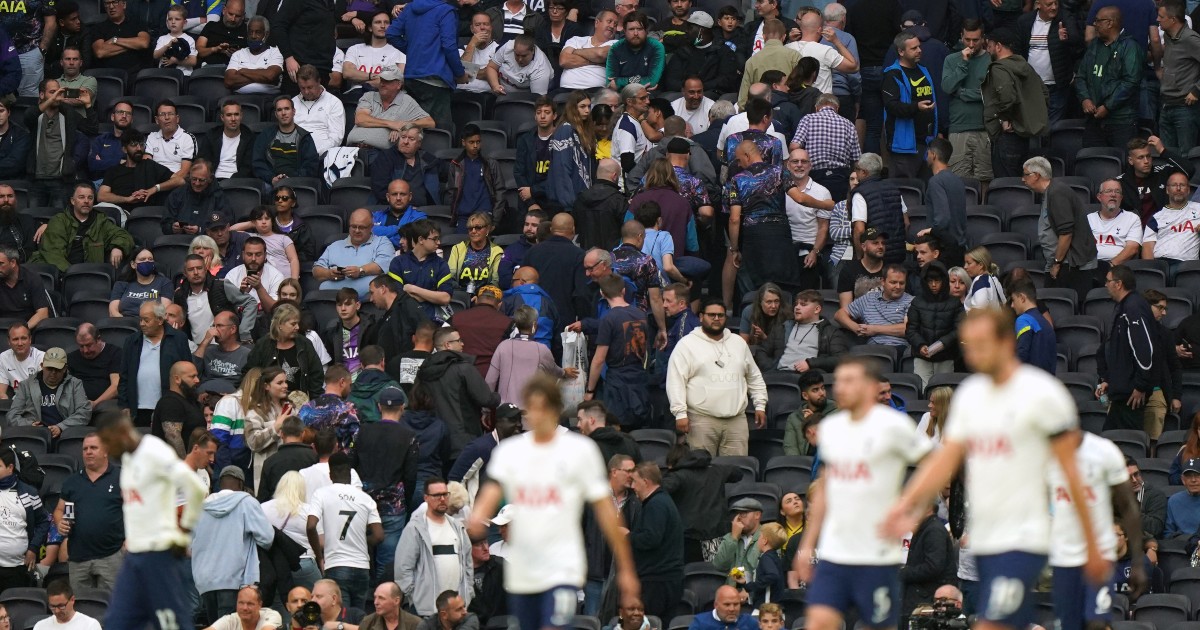 Chelsea overwhelmed Spurs at the Tottenham Hotspur Stadium after Thomas Tuchel learned the lessons of a tough first half and made his changes.

In the Premier League, sustainability is in the air. This afternoon’s match between Spurs and Chelsea was trailed as ‘carbon-neutral’, which sounds like a bit of an oxymoron when we consider that this is a sport whose main reaction to the harsh economics of the pandemic world has been to try to cram as many more games into the calendar as possible, so desperately that they didn’t even bother to really consult with anyone about doing it.

This is all very laudable – somebody’s going to have to try to save the environment one day, and there don’t seem to be that many governments very serious about doing so at the moment – but it’s difficult to take it terribly seriously at a Premier League match when they can’t even be bothered to switched off the LED advertising boards that surround the pitch for a game. Can’t be cutting off that sweet, sweet advertising revenue now, can we?

The afternoon began on a sombre note. Jimmy Greaves, who represented both clubs with distinction, died earlier in the day, and before kick-off there was a minute’s applause with a line-up of former Spurs legends, including Steve Perryman, Martin Chivers and Osvaldo Ardiles, some of whom still looked visibly distraught from the news. Further tributes followed at half-time.

Greaves would surely have approved of the way in which Spurs approached the first half. Heung-min Son returned to the attack, playing down the middle with Harry Kane on the left. Spurs looked a transformed team for his presence, pressing and harrying, dominating possession and getting themselves into decent positions against a team with a famously tight defence.

The final ball, however, was missing from Spurs and when the pace started to drop after about 20 minutes Chelsea started to look more comfortable again. It was clear that Spurs wanted to break to get the ball to Son, who’d been winning his sprint races with Thiago Silva, but when Son did manage to get through just after half an hour, he misjudged his first touch and allowed Kepa Arrizabalaga to smother at his feet.

But the Spurs pressure did shut Chelsea out of the match for a while. The visitors were unable to keep control of possession for meaningful periods, with gaps appearing behind their defence when they did get forward. Half-time came around with little of consequence having happened at all.

Thomas Tuchel shuffled his pack at half-time and within five minutes of the second half, with Mason Mount being replaced by N’Golo Kanté, it had paid dividends. Marcos Alonso went close with a volley of an improbable nature, and then from a corner on the left found Silva making an extremely late run to force a header over the line and Chelsea into the lead.

With their tails up, the visitors went chasing a quick second goal to kill the game off completely. Alonso nearly managed it at the end of a sweeping move of diagonal passes from Kai Havertz and Cesar Azpilicueta which ended with Alonso’s shot being blocked on the line by Eric Dier’s pelvis.

This, however, was only a brief respite for Spurs. After 57 minutes, Kanté’s long-rang shot looked as though it would slip just wide of the post, only to hit Dier and bounce off the inside of the post, across the goal and in. Perhaps this is the difference between the elite level coaches and the rest. Tuchel didn’t make great drama out of these changes. He just got on with them and within 13 minutes of the start of the second half they were two goals ahead and coasting towards another away win.

Spurs, for all their huff and puff in the first half, were blown away by Chelsea’s strong start to the second, and by the time they’d managed to regain their composure their opponents were streaking clear of them and were barely visible on the horizon.

The two quick goals punched the life out of the Tottenham Hotspur Stadium, and a team as defensively comfortable as Chelsea was never going to allow such a comfortable lead to slip. Even so, they created the best chances of the closing stages of the match, with Hugo Lloris pulling off one excellent save to prevent Silva from adding his second goal, but this was a game that largely wound down; Chelsea were comfortable in the knowledge that this Spurs team weren’t going to puncture them.

They raided forward with ease throughout the closing stages, with Romelu Lukaku, who had hitherto been a somewhat peripheral figure in the overall scheme of things, finding a lot of space on the edge of the Spurs penalty area but, instead of shooting himself, he pushed the ball to Timo Werner who, well, Timo Wernered it into Lloris’s grateful arms. In stoppage-time, and with the home sections in the stands already starting to empty, an Antonio Rüdiger daisy-cutter from the edge of the penalty area gave the game a fitting coda.

In the end, the pressure that Spurs applied to Chelsea for the first 20 minutes of this match turned out to be distinctly unsustainable. As soon as Chelsea made their changes the dynamic of the game was altered, and Spurs simply couldn’t react as effectively as Chelsea had at half-time. Spurs’ biggest problem is that they weren’t so much carbon-neutral this afternoon as football-neutral.

Chelsea, meanwhile, are sleek, smooth, and effortless. There were points during the first half when they were being overpowered by a Tottenham set-up that was clearly more aggressive than they’d been expecting, but when the time came to make changes they did so without any fuss, killed the game stone dead in the space of 12 minutes, and then throttled the final half an hour. With the minimum of energy expended, Chelsea got the job done. Spurs will have to wonder how they allowed it all to end up so easy.