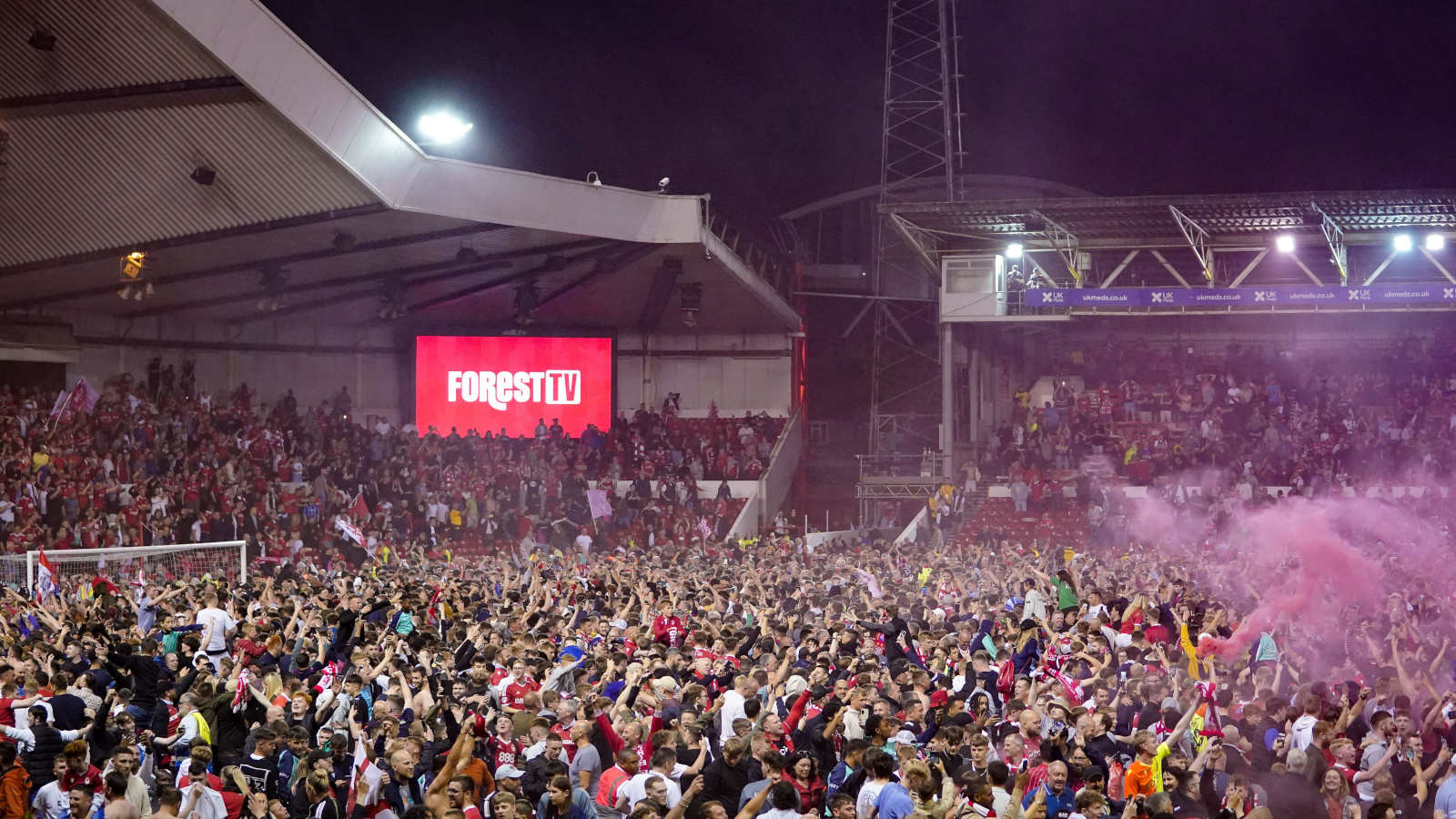 The attack on Billy Sharp at the end of the Nottingham Forest v Sheffield United match was another stain on a difficult season, crowds-wise.

Another May morning, and somewhere in the East Midlands an as-yet-unnamed 31-year old Nottingham Forest fan, quite likely with a sore head himself, will have been awoken early in a police cell. He’ll have a lot on his mind. He’s going to get a criminal record, and is very likely to be sent to prison. It’s almost certain that he’ll be getting a lifetime ban from watching the football team that he presumably loves and a ban from going to any matches whatsoever for a few years. And all this for…what, exactly? Because he couldn’t control his over-excitement at the end of a football match that his team had just won? What a world. What a waste.

The incident that occurred at The City Ground at the end of the Championship play-off semi-final between Forest and Sheffield United can hardly be described as isolated. It wasn’t even the first time this season that players have been assaulted at that ground. When Forest beat Leicester City in the FA Cup at the start of February, a Leicester supporter got on the pitch and, apparently enraged by Forest players having the temerity to celebrate having scored a goal, attacked them. He was subsequently given a lifetime ban from The King Power Stadium, received a ten-year banning order from all football grounds, and was sentenced to four months in prison for each of the three cases of assault, to which he had pled guilty.

The attack of Sheffield United’s Billy Sharp at the end of the Forest vs Sheffield United match was just the latest in a drip, drip, drip of incidents that have occurred since crowds started to become allowed back into matches again in 2020. The final of Euro 2020 has turned out to be something of a portent, in that respect. Thousands of ticketless fans got into Wembley on a day when order almost broke down altogether, and things haven’t improved much, since then.

Pitch invasions are back in fashion, and in a way that hasn’t really been seen for decades. The same could be said for the use of smoke grenades inside grounds, which also seems to have been on the increase. And any use of pyro inside a contained area such as a football stadium cannot come without risk. But what’s fuelling this current rise? Guesses range from a proliferation in the availability of cheap cocaine, psychological ‘fever’ brought about by the lockdowns, the now apparently perpetually febrile political atmosphere and the influence of social media in terms of its effect upon attention-seekers. But these are all ultimately just fumbles in the dark. It’s likely that there are as many different reasons for this sort of behaviour as there are people involved.

The end of the season has certainly resulted in a proliferations of pitch invasions. The majority still seem to pass off relatively peacefully, as happened at the end of the match between Huddersfield Town and Luton Town, but even in cases where serious disorder has been avoided, it has sometimes been by fine margins.

A pitch invasion at the end of the National League North play-off quarter-final between York City and Chorley resulted in flares being thrown and the crowd invading the pitch before the end of the match, in the apparent belief that the final whistle had already blown. Tickets for their semi-final were subsequently limited, and following a meeting between the club and the York Safety Advisory Group, it was confirmed that the capacity of The LNER Community Stadium would be limited to 7,500 for the final, with a significantly higher police and security presence. At £20 a ticket, a 1,000-seat reduction in capacity for such an important match will have a tangible financial cost to the club.

None of this is anything new. Crowd disturbances at matches are almost as old as the game itself. In 1883, two years before the FA permitted payment to players for the first time, Wrexham entered the FA Cup, but crowd trouble during a 4-3 home defeat in the second round against Oswestry at The Racecourse Ground led to the club being banned by the Football Association. Wrexham were disbanded, reformed as Wrexham Olympic Football Club at the end of that season, and were subsequently re-admitted to the FA Cup for the following season. Two years later, after Preston North End beat Aston Villa 5–0 in a friendly match, both teams were pelted with stones, attacked with sticks, punched, kicked and spat at. One Preston player was beaten so severely that he lost consciousness.

Clubs started to put fences up around their pitches in the mid-1970s as behaviour at matches significantly deteriorated after a spell of relative peace following the Second World War. It wasn’t until after Hillsborough that they were taken down again, following the utterly needless deaths of almost 100 Liverpool supporters there in 1989. At its root, that tragedy was the result of years of an institutional policy of containment, that football supporters were a ‘problem’ requiring a ‘solution’.

Almost 140 years on, hooliganism has become the habit that football can’t quite kick. Throughout the entire history of the game, there has been a small subset of people for whom the match and the violence have become intertwined, to a point at which it often feels as though those causing the trouble don’t even seem to care very much about the actual match itself.

As ever, this sort of behaviour puts everybody else in an unpleasant position. The players are at obvious risk, and even those who aren’t (this time) find their achievements being overshadowed by it. Clubs, more PR-conscious and under greater financial strain than ever, could do without the headlines, especially at a time when season ticket renewals are due. The police, stewards, everyone in a position of responsibility, have overseen a failure of control. And other fans watch on in the full knowledge that their match-day experience is now likely to get worse because some others don’t seem able to control themselves. The next time they’re locked in a ground for an hour and a half after the final whistle, or have to attend a ‘bubble match’, or find themselves on the receiving end of heavy-handed stewarding, this behaviour and the perceptions that form behind it will be at least partly to blame.

And the standard mention that football supporters are members of society and therefore no more a reflection of that society has to be repeated. We live in febrile times, in a culture which seems to be accepting dishonesty, increasingly angry ‘debate’, and division, the end result of which no-one really knows. Furthermore, there hasn’t been a point in the last six decades when it hasn’t felt as though there wasn’t some form of disorder surrounding football crowds. It declined from a very high peak from the late 1980s, but it’s never been completely eradicated.

Furthermore, we now have access to see so much more of it than we ever used to. Forty years ago, you’d only have even found out about crowd trouble at the football if it was mentioned on Match of the Day, on the TV news, in newspapers, or on the radio. This even applied in the case of disasters. From personal experience, news of the Hillsborough disaster came through by transistor radio while I was at a match, and the early reports were garbled; I still remember a guy with a transistor radio pressed to the side of his head, tutting and saying, ‘crowd’s on the pitch at the Liverpool match.’ Fairly major riots would take place at matches with no television cameras present at all. For all the attention that crowd disorder is getting now, things would still have to deteriorate significantly to get back to where we were in the mid-1980s.

But it’s still conflicting. The pyro looks great. Most people love to see ‘limbs’, even though tumbling over plastic tip-up seats is…less than optimal, from a health and safety perspective. And pitch invasions are usually joyous outbursts of celebration. Who amongst us doesn’t want to see any of that? But the line between these joyous outbursts and disorder is so very, very fine that it feels almost impossible to guarantee that you could eliminate one without eliminating the other, and it feels as though it will always be impossible account for the behaviour of every single last person in a crowd of 30,000 people, most of whom are men, and many of whom are young men. These factors, for sure, are not problems unique to 2022.