Lampard's denial is costing Chelsea far more than the excuses he claims not to be making... 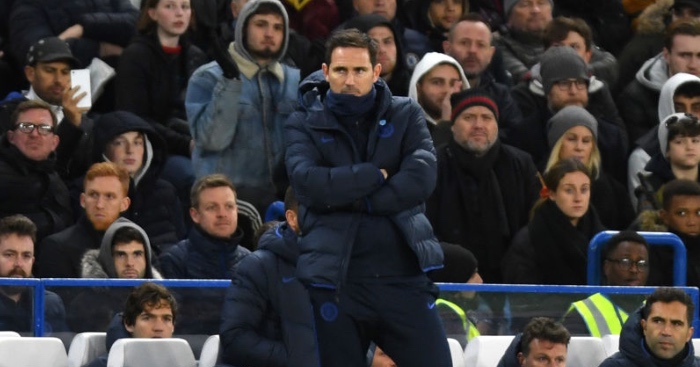 There’s very little point in taking note of any of Frank Lampard’s post-match comments these days. Much like his ‘serious point, light-hearted point [chuckle] but, no, serious point’ pre-match press conferences, they’re a carbon copy of the one that came before. And after Chelsea’s 2-0 defeat to Manchester United on Monday, he trotted out the same hollow assertions that they were unlucky, created loads of chances they failed to convert, and played pretty well. But they really didn’t.

Other than Mateo Kovacic, who was excellent in the first half, and Reece James, whose stock continued to rise despite his obvious frustration at the players around him, Chelsea were rubbish. They could have come away with a point, or even three, given the questionable VAR decisions that went against them, but their performance merited nothing. And Lampard’s denial of this, along with some unfathomable decision-making and an inability to remedy enduring problems at the club, is proving far more costly than the valid excuses he claims not to be making, but brings up at any given opportunity.

After the United loss, Lampard said: “Every week we look at the stats and it’s very clear we make as many chances as anyone else bar Liverpool.” And according to Expected Goals (via infogol) Chelsea should have scored 10 more than they have this season. But there comes a point – which should have been back in September at the first instance of this soundbite in Lampard’s Chelsea problem bingo – when the boss needs to focus on coaching the goalscorers to score goals, rather than complaining about their inability to do so.

Picking the right striker would be a good start. As Matt Stead pointed out in 16 Conclusions, Chelsea’s best period against United coincided with Olivier Giroud’s introduction, after Michy Batshuayi’s shocker on his first Premier League start of the season. The Frenchman’s disallowed goal was a prime example of what he can bring to the side – smart movement in the box and wonderful one-touch finishing. And while the goal was rightly chalked off as Giroud was adjudged to have been marginally offside, Batshuayi lives two or three yards behind the defence, and when he’s not being flagged, he’s allowing the ball to bounce off him or fluffing chances.

Lampard is absurdly consistent. Even his interviews are always the same:
Serious point, light-hearted point [chuckle] but, no, serious point

Presumably Lampard picked Batshuayi based on how he’s been performing in training, the same reason he gives for selecting Willy Caballero over Kepa Arrizabalaga – which is now another problem the Chelsea boss has created for himself. The most expensive goalkeeper of all time was left out of the 2-2 draw with Leicester, in what at the time seemed merely a one-game reminder to Kepa and the rest of the squad that no place in the starting lineup is secure. But Caballero kept his place against United, and didn’t put a foot wrong.

A small part of Lampard, having gone two goals down, was perhaps hoping for a mistake from the 38-year-old that would make switching back to Kepa more logical. His replacement is nowhere near as good with his feet, and every time Caballero receives a back-pass or attempts anything less than a 50-yard hoof, there’s an audible tension around Stamford Bridge, as the fans anticipate a blunder. Now, if Lampard brings Kepa in on the back of a faultless Caballero performance, and the Spaniard plays poorly, Chelsea could face flip-flopping between keepers for the rest of the season behind a defence that yearns for some sort of stability.

Most worrying for Chelsea – and another number to tick off in Lampard Chelsea problem bingo – is their game management, or the lack there of. While the evidence of a plan before kick-off was murky, the inability of the side to adapt as the game went on was as clear as day. The most obvious example of this – picked out in 16 Conclusions – was the ceding of possession while Christensen received treatment in the build-up to the opening goal, but they also had no answer to Ole Gunnar Solskjaer’s decision to press much higher up in the second half.

Lampard simply watched on while his defenders attempted to relieve pressure by pumping the ball forward to 5ft5in Pedro and trampoline-touch Batshuayi. When Lampard did eventually bring Giroud on, United dropped back in the knowledge that they were now up against a striker who could hold the ball up and bring others into play, and Chelsea started to dominate. The Blues boss may claim his hands were tied by the two injuries, meaning he couldn’t risk making an early second-half substitution, but it should have been very clear that they had no chance of getting back into the game while the Belgian remained on the pitch. It was a risk worth taking and 20 minutes wasted.

With Lampard’s final post-match claim that not “many people would have put us in fourth place at this point in the season”, the blue-rinsed lady in the back put down her blue dauber and shouted “BINGO!”, the game was up. As it will be for Chelsea’s Champions League hopes should Lampard not stop focussing on meaningless pre-season predictions and complaining about things beyond his control and look to rectify the problems he’s consistently spoken of and have persisted unremedied all season.