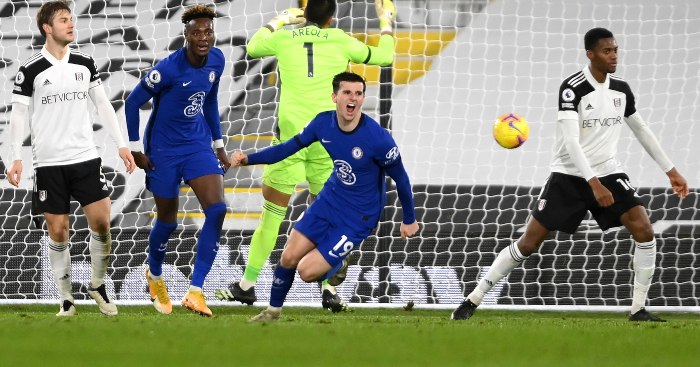 “We’ve had two pretty long weeks where we’ve had a chance to work on the bigger elements of our game. Now is our chance to show that.”

The win over Fulham spoke little for whatever Frank Lampard has been doing on the training ground over the last fortnight. Fortunately for the Chelsea boss, Mason Mount has kept him in a job for at least a few more days.

Mount was the match winner and, by some distance, this west London derby’s best player. His contribution repaid the faith Lampard has put in Mount since he took over a season and a half ago, and if even half of Chelsea’s other attacking players were performing at a similar level, then the manager would be sat a lot more snuggly in the hot seat.

But after the first real window of opportunity to get his message across on the practice pitch, a fortnight only interrupted by an FA Cup tie against Morecambe last week, it seems few aside from Mount were paying attention.

Lampard’s primary focus since the 3-1 defeat to Manchester City must have been his misfiring attack. His forward line has played like strangers of late, which many of the individuals were prior to the season. But the money lavished on his attack means patience is sparse while they continually fail to gel.

The Chelsea boss selected only Hakim Ziyech of this summer’s big money attacking recruits with Lampard putting his faith in those he trusts most with his future at Stamford Bridge seemingly hanging by a thread. Playing it safe is understandable in these circumstances, but Chelsea’s hierarchy are unlikely to appreciate Timo Werner and Kai Havertz being reduced to watching briefs on a long-term basis.

The hope would have been that after a couple of weeks without a Premier League distraction, Lampard could get to work on helping at least one of Werner and Havertz fit into whatever formation the manager feels appropriate. But the system is perhaps as much of a concern as the misfiring individuals.

Mason Mount created seven chances for Chelsea vs. Fulham, no Blues player has created more in a Premier League away game across the past five seasons.

Lampard spoke last week about a 4-3-3 system with two No.8s in an attempt to get both Havertz and Mount into their preferred positions. Which is fine when Morecambe are the opposition. In the Premier League, presumably Lampard will wait until he is on considerably firmer ground before leaving his back four exposed, unless N’Golo Kante suddenly rediscovers his peerless form of three years ago.

Which means Havertz will remain on the sidelines, especially while Mount maintains this form. Not only was he Chelsea’s most creative force, but from different positions, he dictated their tempo. Mount started as a No.8 but against 10 men, Lampard shuffled the 22-year-old back alongside Mateo Kovacic when he made the first of two tactical tweaks. Initially, Tammy Abraham was paired with Olivier Giroud in an effort to make Chelsea’s bombardment of crosses pay – they finished on 30 – which lasted 10 minutes before the Frenchman was hooked with Ziyech.

Timo Werner’s form reminds me of Torres when he came to Chelsea. It’s as though his feet are a couple of seconds behind his brain.

Werner and Callum Hudson-Odoi replaced them and the pair are giving Lampard headaches for contrasting reasons. Werner’s confidence looks shattered and his finishing this evening won’t help the £50million striker. Hudson-Odoi, along with Mount, is arguably Chelsea’s most in-form attacker but Lampard still doesn’t seem to fully trust the England winger – certainly not enough to start him on the left.

The clamour to play Hudson-Odoi in his XI will only intensify between now and Tuesday evening when Lampard takes Chelsea to Leicester. Really, after a fortnight on the training ground and a win over Fulham played for the most part with a one-man advantage, Lampard should have a clearer picture of a way forward for his front line. But the only sure thing for Lampard will be the continued reliance upon Mount.