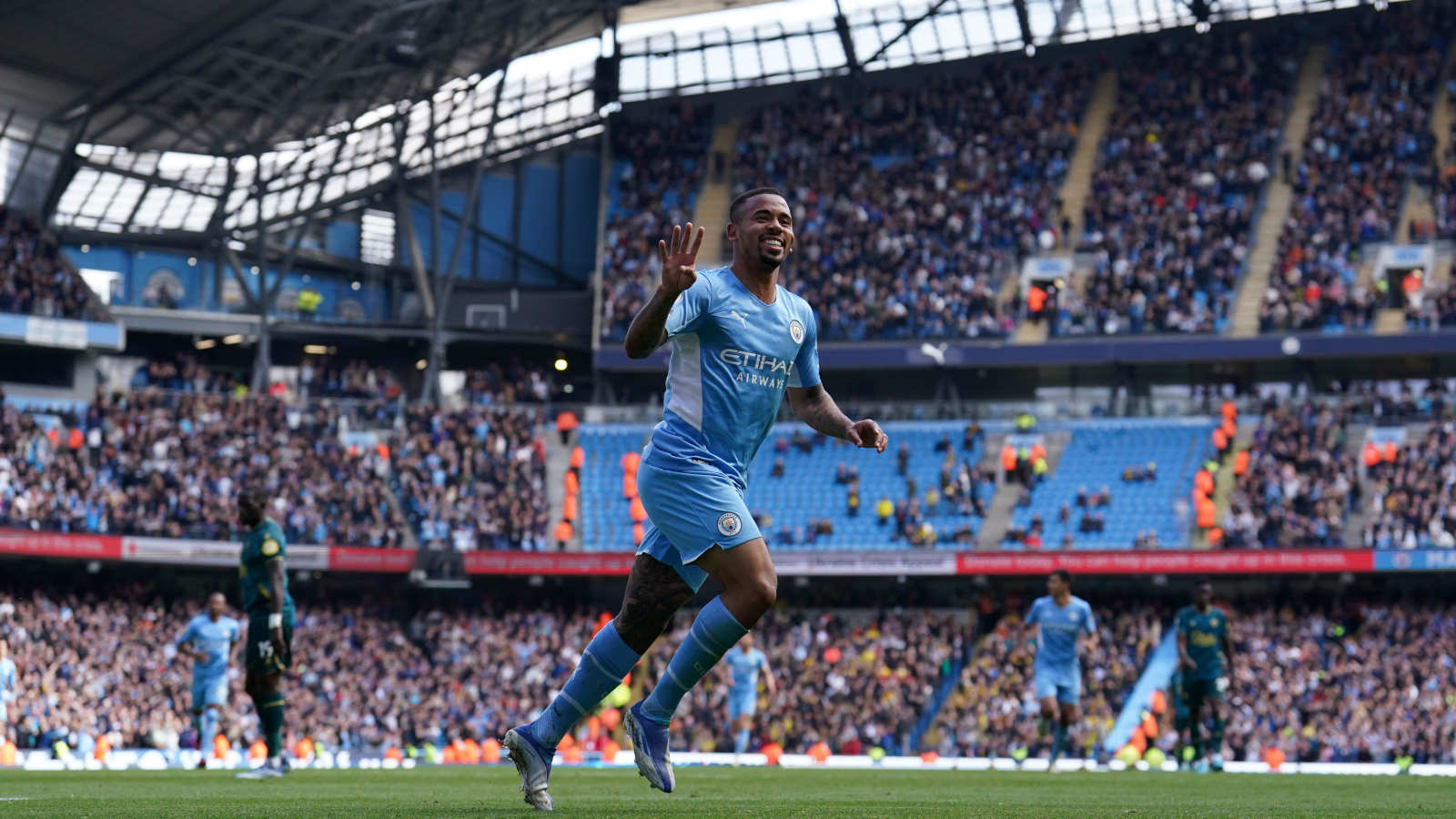 Gabriel Jesus seems likely to be leaving Manchester City in the summer and his goals against Watford were a timely reminder of his talents.

Well, it was certainly a statement. Following a week of speculation about the addition of Erling Haaland to the Manchester City squad in the summer, a player likely to leave at the end of this season left a huge mark on City’s 5-1 demolition of Watford. Jesus resurrected his season a week after Easter; Gabriel scored four of Manchester City’s goals, the first player to score four goals in a Premier League match since Son Heung Min for Spurs at Southampton in September 2020. While the opposition was about as modest as can be found in the Premier League, it was a timely reminder of his talents as the business end of the season looms into view.

But it doesn’t seem likely that Gabriel will be a Manchester City for that much longer. He’s not a great scorer of goals but his record is decent enough, with 121 in 313 appearances in all competitions since he signed for City for £27m in January 2017. But to look at his goalscoring record alone is to misinterpret a player who falls a little between two stools. Gabriel is able to player as both a winger and a striker and that degree of flexibility is very useful to Pep Guardiola and Manchester City.

But City have been playing this season without having replaced Sergio Aguero, and Gabriel doesn’t quite offer consistent, razor-sharp clinicism in front of goal. He may have shanked four past Watford to go with his goal against Liverpool a couple of weeks ago, but these were his first Premier League goals since September 25, and he’s only scored seven Premier League goals in total this season, though it also worth remembering that although he was originally used as a forward when he arrived at the club, he’s been most commonly seen on the wing this season.

Gabriel has a year left to run on his contract, but at 25 years of age had reached something of a crossroads. If they sold this summer, Manchester City would receive a transfer fee – though how much they’d be able to demand for a player in his position is open to question – while the player may be able to negotiate a better contract and signing-on fee, as well as potentially becoming the focal point of a new team as he reaches what should be his career peak.

It’s a question of priorities. If Gabriel is primarily motivated by the accumulation of medals, he’s already done well out of Manchester City, with three Premier League titles, three EFL Cups and an FA Cup. Even if pushed down the pecking order at City, it’s not difficult to argue that his best chance of winning more silverware might also come at The Etihad, even if his own playing time was further limited by new acquisitions.

But other factors also come into play when deciding on a transfer. If he places great importance on status, barring perhaps four or five other clubs on the entire planet, leaving Manchester City may be considered taking ‘a step down’. But if playing time is important to him, he’d likely be better off elsewhere; if his work-rate on the pitch is anything to go by, it probably is. He may already be aware of the importance of this next decision – especially with his first child on the way. Small wonder that when questioned about it, he played his cards close to his chest.

The club with the greatest interest in him are Arsenal. There remains a question mark over whether they will be able to offer him Champions League football next season, but it feels like a good fit. Arsenal have had a forward-shaped hole in the first-team squad since the departure of Pierre-Emerick Aubameyang. Alexandre Lacazette is also expected to leave in the summer and they are in the coterie of clubs that can comfortably afford his wage demands, while Mikel Arteta is already fully familiar with him from his own time as Pep Guardiola’s assistant. It is being reported that this is almost a done deal, but at this point of the season it wouldn’t make a great deal of sense to recklessly make any form of announcement when both City and Arsenal need as little external distraction as possible.

Furthermore, it seems entirely likely that City are already making plans for moving on without him, and they may already have lined up a replacement. Julian Alvarez signed a five-and-a-half-year contract with the club at the end of January; he remained with his ‘former’ club, River Plate, but it has been confirmed that he will be moving to The Etihad in the summer, and he is a forward who can also play on the right wing.

Sometimes, a transfer makes sense for all parties. Manchester City have had good value from Gabriel Jesus, but are unlikely to be able to offer him the first-team football he would want. Arsenal need a new forward and can offer him better opportunities to play at a club close enough to the elite that it might not even feel much like a ‘step down’, and a player with enormous ability and an extraordinary work-rate gets the opportunity to step fully into the spotlight at what should be the perfect point in his career. With seven medals and seven trophies won in five-and-a-half years (so far), Gabriel and Manchester City have much to be grateful to each other for, but the end of this season is perfect timing to close this chapter.