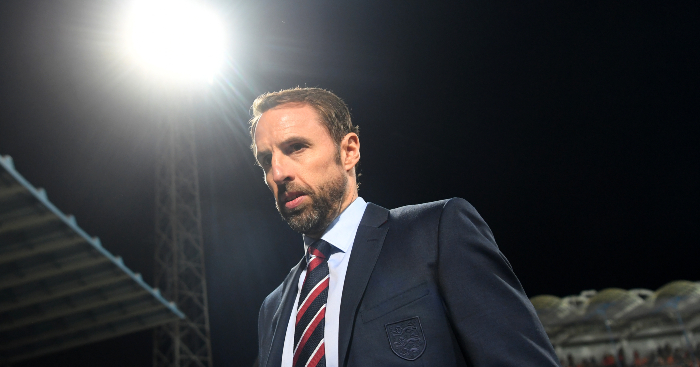 The one quality Gareth Southgate guarantees as an England manager is the ability to relate with his squad. He has been there, done it and got the bag over his head while eating overpriced pizza. If anyone can share compassion with players who have found such an intense spotlight so blinding, such significant pressure so unbearable, it is the man who started a 12-yard run-up in June 1996 and vicariously completed it in July 2018, carrying the baggage of an entire nation’s summer hopes and dreams for two arduous decades before finally dropping it at the door as football came home.

His understanding even extends to the media. When Steve Holland dared to not completely obscure a possible England team in a possible England formation ahead of a World Cup game against Panama two years ago, it was captured by long lens cameras and leapt on by journalists, who described the incident as yet another ‘own goal’ during a major international tournament.

Southgate initially donned his waistcoated parka and braved the storm in a teacup – “our media has to decide whether they want to help the team or not” – but he later offered a more measured take.

“The guys have to find stories and produce content,” he said. “We have to get results.” And immediately a fire that his predecessors might have continued to stoke was doused by a manager who understood how his words could be interpreted and appreciated the motivations of everyone involved. He, Holland, his players, the media: everybody won. Or at least nobody explicitly lost.

From that to this. Southgate has faced an incredibly difficult week but that cannot excuse his explanation for the team selection against Denmark and the predictably insipid performance that followed. To suggest that “on the back of everything on the last couple of days, we needed to be secure and solid” was cowardly. To state that “if we’d been lightweight and wide open and looked a mess” then critics would be “pointing at yesterday as the cause of it” completed his transformation from empathetic to plain pathetic.

It is the sort of quote Jose Mourinho would be lampooned for, a dangerous kind of rhetoric and subtext designed to protect himself and leave others open to censure. Southgate wants us to know that he only started eight defensive players against Denmark to avoid Phil Foden and Mason Greenwood being blamed if England lost or played poorly, so you can blame Phil Foden and Mason Greenwood for that. For managing two shots on target in 90 minutes. For giving Jack Grealish 15 minutes. For hating left-footed people. For watching Danny Ings have the best season of his career and rewarding him with 12% of the time on the pitch across two games.

Southgate has judged it wrong. His first response, to call the pair “naive” and point out their “responsibilities” but say he will speak to them privately “in the appropriate way” so as to “not add to how difficult their situation is going to be” was perfect. It toed the line between authority and sensitivity. It balanced his role as a manager of players, of expectations and of the media.

But sensing a pile-on and perhaps a build-up of resentment towards his tenure, Southgate needed little excuse to throw a couple of snide kicks in, to blame a pair of young players for his own mistakes. The only party that stands to benefit is the one that needs “to find stories” and he has gift-wrapped this one to the detriment of himself and his players.

Southgate was the one and still turned us on in Russia; now he seems just as self-serving as the rest.