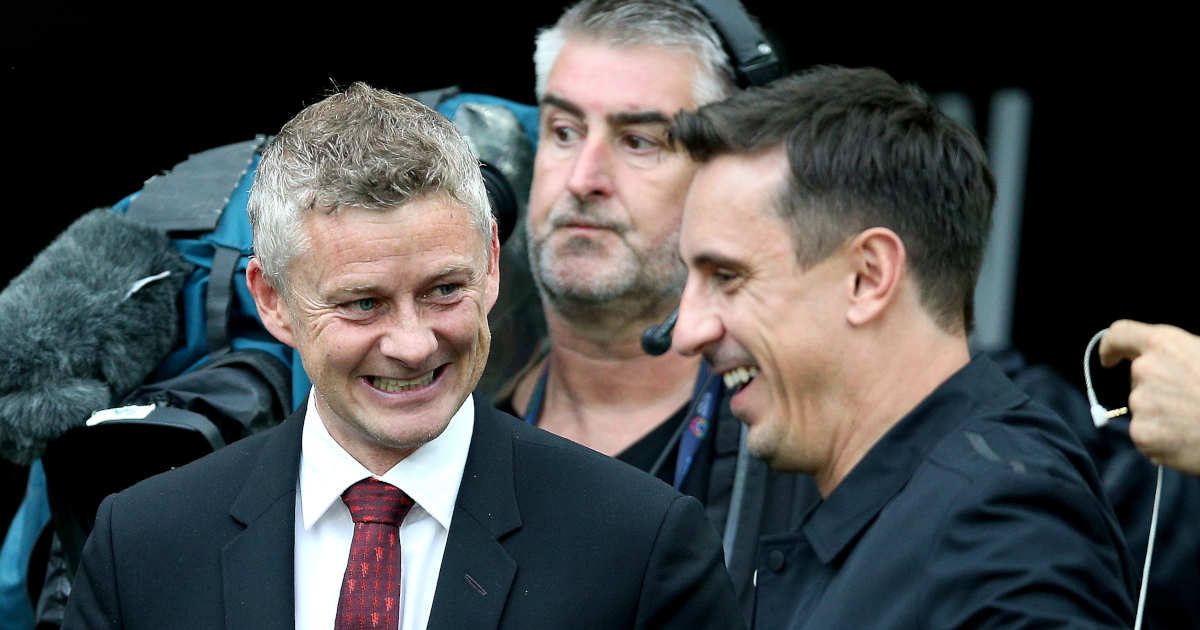 Gary Neville found himself between a rock and hard place after the match between Liverpool and Manchester United, but why aren’t pundits allowed to declare an interest and pass?

It was difficult not to feel a little sympathy for Neville after the match between Manchester United and Liverpool. Regardless of what many would-be Nostradamuses might now claim, few saw Liverpool’s 5-0 thrashing of United at Old Trafford coming. Most would have predicted a Liverpool win and many may have believed it would be comfortable, but not that many people would have confidently predicted such total Liverpool victory, to the point that they effectively took their collective foot off the pedal and ran the clock down for a full half hour. Certainly not at Old Trafford.

In the Sky Sports studio after the match, Jamie Carragher and Graeme Souness took Neville to task, effectively goading him to say that Ole Gunnar Solskjaer should be sacked immediately. Neville’s reticence to do so has been widely interpreted as a valiant attempt to stand up for his ‘mate’ in the face of overwhelming evidence that whatever Solskjaer is doing with half a billion pounds’ worth of ‘talent’ is not working, and that a change is surely necessary if United are to avoid fading into mid-table obscurity for the first time in three decades. Manchester United are now 7th in the Premier League, the same position that they managed under David Moyes in 2013/14. It’s closer than some people likely realise.

For fully twenty minutes, Neville had to stand alone on the subject, as though he is somehow personally responsible for what is going wrong at Old Trafford. Jamie Carragher felt that Ole should go at the end of this season. Graeme Souness believes that Manchester United’s backroom staff need a complete overhaul. As the minutes passed, Gary was forced into a tighter and tighter corner by the contradictions between what he believes and the evidence of his own eyes. But surely it couldn’t be, that he could sit there and defend a status quo that produced the cataclysmic 90 minutes of football that we’d just all watched together, could it?

Souness was excoriating of both Solskjaer and United’s backroom staff, and Gary could only point to Mike Phelan’s ten years of working with Sir Alex Ferguson as mitigation for him being there. It was, in its own way, enthralling television, and the real shame of it was that they had to break away sooner than most of us would have liked for the American Grand Prix in Austen. At times visibly uncomfortable and grasping for words as though they were floating away from him, his arguments sounded increasingly tenuous as time progressed.

It’s not that Neville wasn’t critical of the way in which Manchester United played against Liverpool. It’s more that he is either putting himself or has been put in a tight situation by having to comment on the shortcomings of someone who we may presume to be a personal friend, and whether they should lose their job over them. Of course, the normal rules do not apply here, as they would to the vast majority of us.

For most people, getting sacked or resigning from their job would have ramifications in their personal lives, and this may not be the case to anything like the same extent, if all concerned are already multi-millionaires who live in fancy houses. But it still shouldn’t be difficult to undertstand why Neville would have have found it difficult to say that his friend should be sacked from his job.

But this in itself opens up a whole new avenue of questions. If analysts are so close to those that they are expected to talk about, should they even be talking about them in the first place if they can’t answer as frankly as they’d like to? For years now, broadcasters have increasingly seemed to believe that pundits should be selected because they have prior experience of a club. Jamie Carragher and Graeme Souness are routinely rolled out for Liverpool matches. The same goes for Gary Neville and Manchester United, and for other pundits and other clubs. And that comes at a cost.

It’s quite likely that, if ever a meeting was held at which this was the topic of conversation, a graph would have been pulled out with “Banter” on one axis and “Engagement” on the other. It is very much in the best interests of broadcasters to provoke controversy, which they can do either directly, through having their anchors ask deliberately provocative questions, or indirectly, just by choosing the most combustible combination of guests that they can.

In the case of Gary Neville, there are hoards of people who are sitting at home joining in with the goading, willing Neville to call out his friend for their own amusement, because people in the 21st century are weirdly cruel, like that. But that’s not to say that post-match coverage should be no more than an assortment people standing at a whiteboard, dryly analysing endless reams of statistics. Televised football coverage should be entertaining because football is, at its heart, entertainment.

But at the other end of the spectrum, few viewers would want every round of post-match analysis to be a circle of pundits, all decrying the manager of the losing side of the game they’ve just watched. It shouldn’t be beyond their ken to be able to make the analysis light but incisive, and honest without ending up as a pile-on aimed at those who’ve just had a bad day. News reports emerging from Old Trafford are now making much of this talk irrelevant anyway, with speculation intensifying that Solskjaer will not, as has previously been claimed, be given until the end of this season to right the mess at the club. But broadcasters should look again at the chumocracy of punditry, because when it reaches the point that it did after Manchester United vs Liverpool, it might be worth asking the question of whether it’s all gone a little too far.