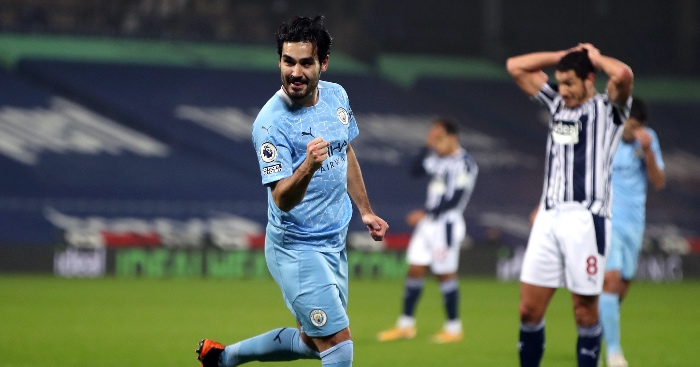 Ilkay Gundogan’s seven goals in his last eight Premier League games is as many as he had scored in his previous 61 games in all competitions. Firstly, what the f***? And secondly, why has it taken a flurry of goals for him to be (sort of) appreciated?

He’s an extraordinary technician. That much has always been obvious. But with that being a minimum requirement at Manchester City, the abundance of players with an impeccable first touch and an eye for a pass – Bernardo Silva, Riyad Mahrez, De Bruyne, David Silva – has until recently limited Gundogan to something of a dogsbody role in Pep Guardiola’s side.

While the German sat deep, worked hard and kept the ball moving, others were tasked with creating chances and scoring goals. He was perceived for a long time as a safety-first pick. Because he can so ably fill in for Fernandinho or Rodri in the holding role, seeing him named in the side ahead of the likes of David Silva was viewed as a conservative approach from Guardiola. He was just another skilful footballer among many; one that was part of a title-winning team but not one that won them the title, perhaps even someone holding them back.

And in Gundogan, you’ve got all the ingredients that result in general underappreciation. He’s quiet, he’s German, he plays for Manchester City and in the position that most frequently goes without credit.

Defensive midfielders – N’Golo Kante, Fabinho, Fernandinho – are hailed nearly as much as the playmakers, wingers and strikers whose worth is easily quantifiable. But the likes of Gundogan or Georginio Wijnaldum can be disregarded, even criticised by those that can’t look past statistics to judge a player’s value.

Guardiola has always loved Gundogan, but the wider public requires those numbers to hang their opinions on; now the German is as well-hung as anyone.

His scoring rate has increased from 0.09 goals per 90 minutes last season to 0.61 in this campaign, second only to Bruno Fernandes (0.63) among Premier League midfielders. Surprising perhaps given what we have come to expect of Gundogan at City, but not when you consider the tactical change that has seen him take significantly more touches in the penalty area per 90 minutes (3.39 : 2.10) and more shots (2.35 : 1.38). The improvement is by design.

“A striker like him can drop and play and get to the box, he’s an outstanding player because he’s so intelligent,” Pep Guardiola said last season, when he claimed Gundogan could play as a striker if required. He’s not playing as a striker now, in fact his position on the team-sheet hasn’t changed at all – he’s one of the two 8s in a midfield three – but those positions are something of a nonsense given the fluidity of the front five, and his influence has increased dramatically with added creative responsibility and freedom to get forward.

He wasn’t the obvious or exciting answer to the question of how City would replace David Silva, but with Phil Foden’s billing as the great Spaniard’s successor more about timing than a similarity in skill-set, Gundogan is a better fit.

Like Silva, he’s got that ability to be calm while all others are in a state of panic: to take a breath and assess options before inevitably picking the right one. He and Silva are the sort of footballers that have played like experienced 32-year-olds from the age of 21.

But they’re far from one and the same. Silva’s greatness was in his creation of opportunities, either for himself or others. And while Gundogan has always had that ability to a lesser degree and is now more frequently taking up positions to provide, it’s the sniffing-out of chances – whether a new-found or hidden quality – that is most impressive.

“Gundo is a guy who has an incredible sense of goal,” Guardiola explained after his side’s win over West Brom. “It is not just knowing the right time to arrive at the box, it is the right second. This is the most difficult thing – not to arrive one metre before, or one metre later, but at exactly the right time, and Gundo has this sense. And it’s not just that – with his finishing too he has this way to control the ball, slow down and take a second to compose himself and see what happens, and be clinical.”

Gundogan has never scored goals at this rate has admitted he doesn’t “know the secret” to his recent success, other than his slightly more advanced position. But it probably is just that simple – the player we’re seeing now is the player he always been. Circumstances and his versatility meant we perceived him as something different; something less than the wonderful footballer he is.