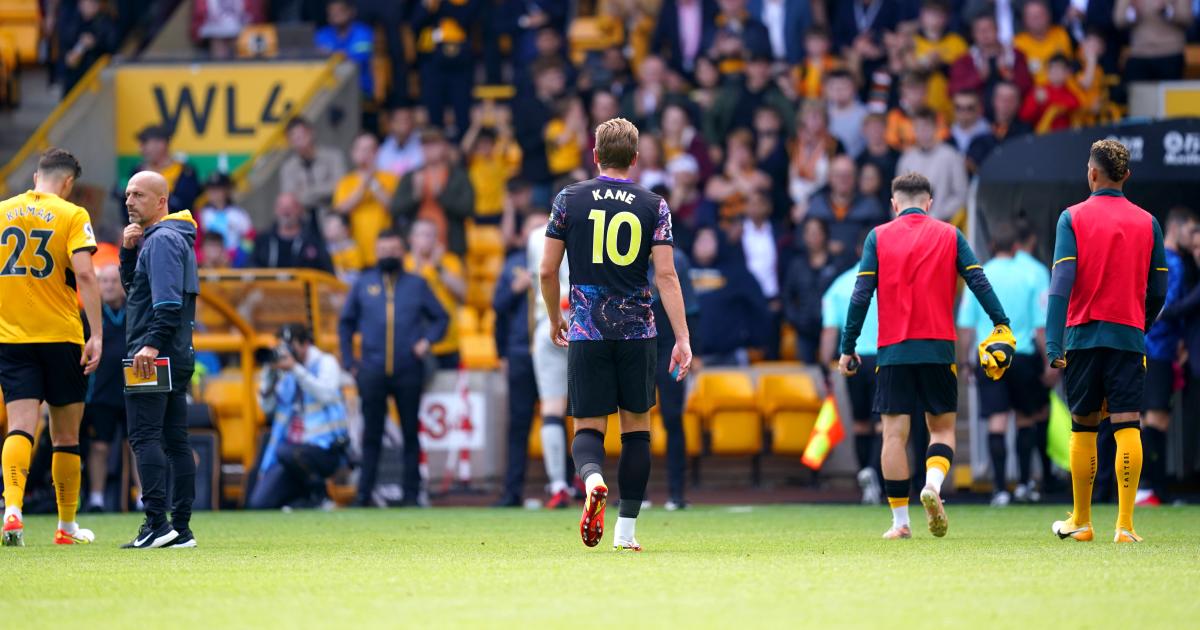 Daniel Levy never blinked. Harry Kane has accepted defeat, Spurs keep their star and the media culprits will carry on as if nothing happened.

And so, with a quick post on social media, the Harry Kane Transfer Saga is finally brought to an end. For a few months at least.

With more than a hint of David Brent turning down the promotion, Harry Kane has decided to stay at Spurs and give 100% effort to helping end that trophy drought.

He was quick to mention the response of the fans to his cameo at Wolves and there’s no doubt that the speed and ferocity with which they turned on him and his bungled attempt to extricate himself from a Daniel Levy contract has been the part of this that has most taken Kane by surprise.

It was incredible to see the reception from the Spurs fans on Sunday and to read some of the messages of support I've had in the last few weeks. 👏⚽

I will be staying at Tottenham this summer and will be 100% focused on helping the team achieve success. #COYS pic.twitter.com/uTN78tHlk1

Despite the apparent bungling idiocy of Kane and his brother, despite all Harry’s early summer talk of it being “his decision” to make, neither Kane could really have expected Levy to make escape from a contract with three years left to run straightforward. Breathless media coverage of a ‘gentleman’s agreement’ always seemed oddly reluctant to mention a fee at which Spurs and Levy would budge. This was always an absurd and glaring omission, with only two explanations. First, that the Kanes inexplicably never nailed it down; or two, that it was nowhere near being met by Manchester City.

Our gut feeling is that it’s probably a bit of both. The Kanes never had a figure from Levy at all – hence the infamous £160m Sun front page, of which more later – and if they had it would have been far beyond the numbers City are reported to have offered.

This was always the folly of Kane’s bridge-burning approach. He and his camp – and huge swathes of the newspaper industry, to be fair – behaved as if the move was inevitable. It’s not revisionism or hindsight to say that was simply never the case. Charlie – let’s be kind and call him an inexperienced football agent – knew all the tools in the move-forcing arsenal, but never quite grasped how or why or when to deploy them. He never had City where he needed them to be before going nuclear.

We don’t know our arse from our elbow, but even we saw that Sun front page for the bollocks that it was, for the questions it left unanswered, and we’ve said all summer that the numbers involved all made Kane staying put more likely than him getting away. The three years left on his contract. The £150/160/200m that Levy would want. The harsh yet undeniable truth that for all his undoubted world-class talent Kane wanted City more than City wanted Kane.

It is, to be serious for a moment, all a bit of a shame in lots of ways. It is a shame – no matter how well remunerated he was for the chains with which he imprisoned himself – that Kane is stuck at a team that he probably has outgrown. He is almost certainly the best and certainly the most established player on the continent not currently playing Champions League football. That his first job at Spurs after his declaration of loyalty is to try and help them avoid Europa Conference League humiliation against Pacos Ferreira is a painful reminder of precisely where he is, and where he wants to be.

But the guileless manner of this summer’s failed attempt to break free has also damaged his rapport with Spurs fans. It was possible for him to leave with, if not quite best wishes then certainly the understanding of a support base not exactly enamoured with either their club or their chairman in the early part of the summer. That Kane managed to lose the popularity contest from that point is far more remarkable than the fact he is now stuck trying to patch it back up.

And he will. It won’t take many goals – a couple on Thursday night would probably do it – for the fans to start being won back round and the chants to return.

There are also plenty more positives here. It’s good for everyone – and I do mean everyone, because let’s face it which of us really wanted to hear any more about this – that a line has been drawn under it with a week of the transfer window still to go. This won’t now rumble on until deadline day, distracting and undermining everyone else. Spurs and City and above all Kane now know exactly where they stand and can proceed accordingly.

For Spurs – and this is so obvious it barely needs saying but is easily overlooked in what has become a transfer saga with precious little to do with football – they suddenly have their focal point back.

Even with uncertainty still swirling around him, Kane showed his value in a brief cameo at the end of the 1-0 win over Wolves. Spurs spent much of the game clinging on to the early lead Dele Alli’s penalty had given them, but Kane immediately made them look more secure. He could have scored but even without a goal he made those final minutes easier to negotiate. What he brings to the team in terms of goals, creativity, leadership and experience is hard to overstate.

It’s easy to be glib about his Instagram promise of 100% commitment to the cause now he’s not leaving – it’s the bare minimum for all that money etc. etc. It’s easy to mock the attempts to now make this look like his decision. But if Spurs get 2020/21 Kane back they become a far different proposition and have already won their first two games of the season – neither of them a gimme.

So Kane and Spurs fans will patch up their differences. Both will pretend they didn’t say the things they said because it suits them to do so. He’ll probably win the Golden Boot again despite the three-goal start he’s given some of his rivals.

The media coverage, though, should not be so swiftly forgotten. There’s an unwritten acceptance that a certain amount of warm bullshit keeps the whole transfer merry-go-round moving and everyone knows the game. But someone at The Sun should be asking questions about why the £160m front page was allowed to run without anyone raising the obvious point that there was no indication City had or would bid anything like that amount.

They won’t, though. Because like Kane and Spurs fans, it’s in everyone’s interests to just act like it never happened. Until the next time it happens.