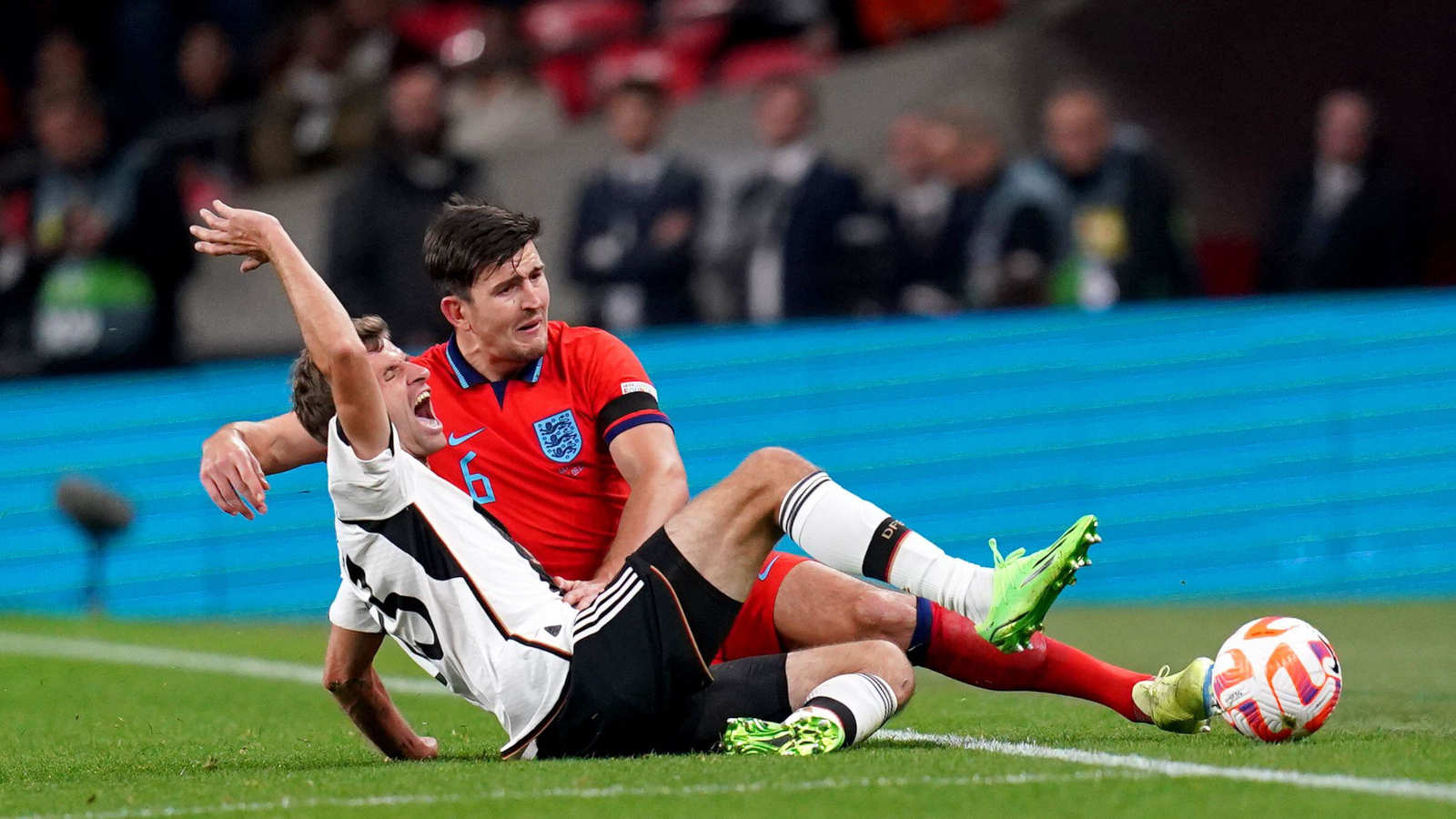 Harry Maguire is a becoming a headache for Gareth Southgate, but will the England manager’s bloody-minded loyalty lead to a World Cup risk?

It was the sort of evening from which onlookers could take what they wanted to fit their preconceptions. On the one hand, for three-quarters of their game against Germany, England were every inch as laboured as they’ve looked over the last six months. The evening ended with them having gone six games without a win. But on the other, they sparkled for a critical 15 minutes during which they looked every inch contenders to go some distance in the upcoming World Cup.

But as the fallout from an extraordinary evening descends, there is one glaring matter that needs to be addressed. Harry Maguire’s collapse in form over the last couple of years has now hit a point at which continuing to play him starts to feel akin to an act of cruelty, and following further completely avoidable mistakes against Germany, debate has erupted over whether he should even be on the plane to the Middle East for the World Cup finals.

After the match Gareth Southgate attempted diplomacy in the midst of a conversation that is becoming far from diplomatic, saying (as he had after the Italy game) that he’d be standing by his “best and most experienced players”, although this was qualified by him adding “unless we’re in a position where it’s almost untenable and impossible to pick them”. This, of course, is the manager hedging his bets, but it’s worth asking at what point it becomes ‘untenable’ to continue playing a defender whose accident-proneness is starting to look endemic.

Maguire’s role in the first Germany goal played out like a scene from The Fast Show. Under no pressure whatsoever he passed the ball straight to Jamal Musiala, a sloppy and needless pass which defied rational explanation. And then, as Musiala ran at him, he flicked out a leg, caught the winger, and conceded a penalty from which Germany took the lead.

His involvement in their second goal was somewhat more oblique, losing possession to Kai Havertz inside the Germany half at the start of a move which ended with Havertz curling the ball sweetly into the top corner to double the visitors’ lead. There was considerable drama yet to follow, but at this point in the evening it felt as though a downpour of jeering would be the soundtrack to the final 20 minutes and that the players would be departing for the World Cup with that sound still ringing in their ears.

Manchester United supporters could be forgiven for saying ‘we told you so’ in unison as his evening unravelled. Maguire has become a cross between a punchbag and a meme there over the last couple of seasons as the individual mistakes have mounted up, and while it’s fair to say that there is something unfortunate about his gait which makes him look as though something calamitous could be just around the corner when there isn’t, there all too often is something calamitous just around the corner, and there comes a point at which it has to be asked whether all of this is doing anybody any good.

Because this isn’t a matter of theorising or conjecture. This sort of thing keeps on happening to Harry Maguire, and should he get wrapped up in his own bootlaces in the same way that he did against Jamal Musiala in the finals, there will be no hiding places in the interminable debates over whether England should play a three-man defence or not.

Despite their sudden (and, if we’re honest with ourselves, completely unexpected)  flurry of goals against Germany, England have been struggling to score goals from open play for months, and if there’s one position in which you don’t want to find yourself if your team is on this sort of bad run, it’s conceding completely unnecessary goals.

Gareth Southgate clearly values loyalty, but at what point does this (in many ways admirable) trait become self-sabotaging? Because if there’s one thing that we can say with a degree of certainty, it’s that a similar catalogue of errors to that which ended in Germany taking the lead at Wembley would be met with an avalanche of criticism were it repeated at the finals.

And this criticism would not end with the player himself. It would be argued – and absolutely not without justification – that the warnings had been loud and clear, and that they’d been ignored over a loyalty that had strayed over an invisible demarcation line into bloody-mindedness. Southgate would be putting himself in the firing line, and it’s difficult to argue that it would be a ‘calculated’ gamble when the variable could have pretty disastrous results.

But when Maguire’s team-mate Luke Shaw says, “Look at the Euros and what he has done, people need to understand he is a big part of the England team and they have to accept it,” there’s more than an element of truth to what he says. Tournament football can be about more than just what happens during the very specific time-frame of the matches themselves.

Having a happy and settled squad is important, and if Harry Maguire is a good player to have around the squad in training and during those long stays in hotels trying to keep yourselves entertained, then that may be considered sufficient justification for taking him in the final squad. As such, arguing that he should be jettisoned from the squad altogether feels almost futile.

This doesn’t mean that he should be in the starting team against Iran, the USA and Wales. Having loyalty is all very admirable, but Gareth Southgate needs to give serious thought as to where that invisible demarcation line is. And even Harry Maguire himself might want to give consideration to whether any of this is doing him any good.

He’s looked like he needs a holiday for a very long time; it may even be that the World Cup finals would be a good opportunity for him to take a break. He can do that and still be in the squad. Gareth Southgate has spoken about his desire to continue in the England manager’s job beyond this upcoming event, but if there are any more mishaps like those seen against Germany, that matter may no longer be within his grasp.