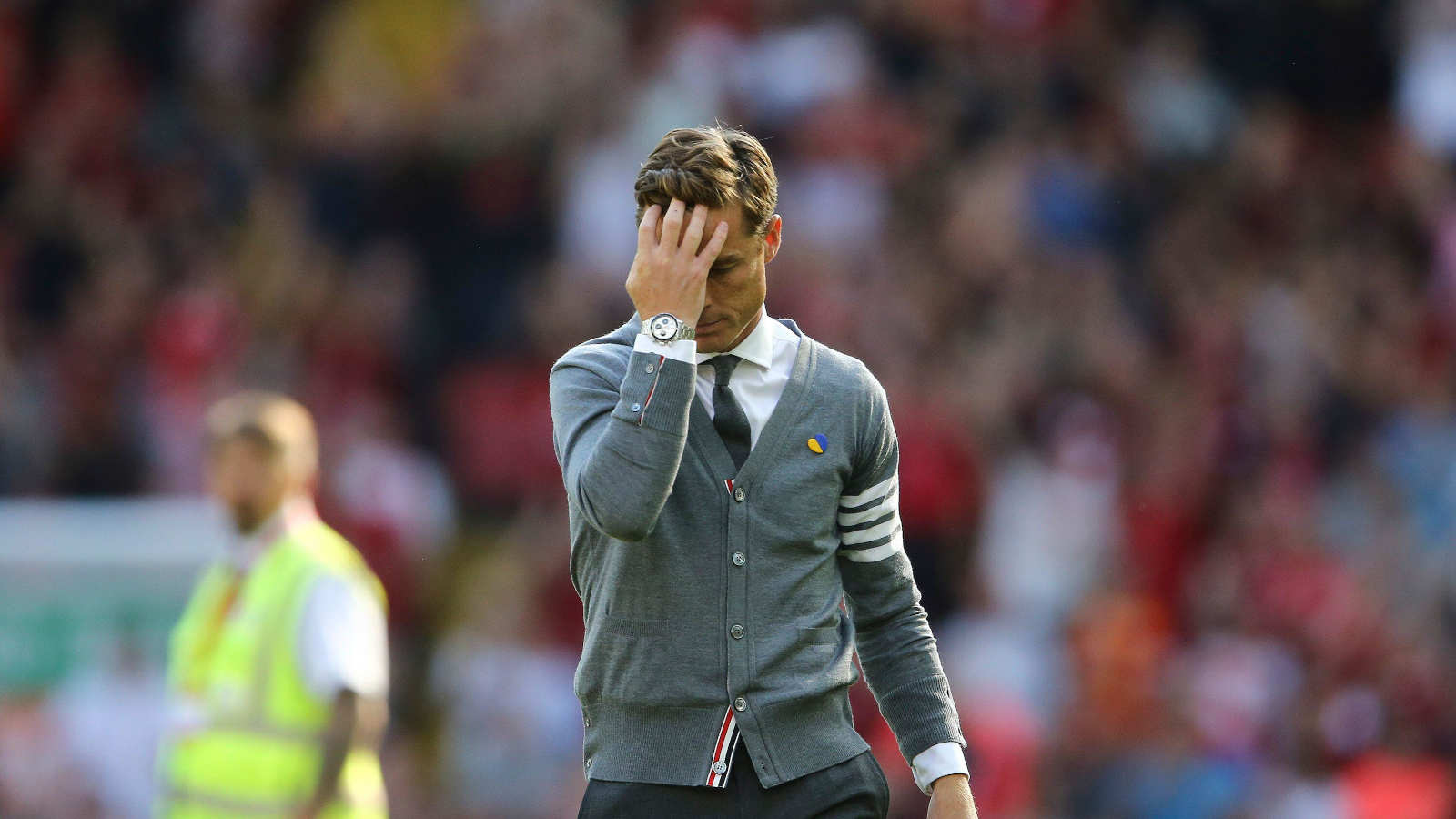 One very heavy defeat isn’t usually enough to merit a sacking, but Bournemouth were clearly unhappy at Parker’s comments after the Liverpool match.

Who knows, perhaps Bournemouth will now issue a commemorative cardigan with red and black stripes on one sleeve. The bell has now tolled for Scott Parker on the south coast, and while it is reasonable to say that it feels harsh that a manager who’s just got his team promoted should find himself out of work by the end of August, it’s difficult not to conclude that he needed to be replaced.

Firstly, there’s the small matter of the nature of their 9-0 loss to Liverpool. To lose so heavily to a club that came close to becoming the champions of both England and Europe just three months ago is far from surprising.

But to lose in the manner in which Bournemouth did, with a defence that seemed to change shape every time their opponents attacked (and not in a good way), offered little indication that this team would be able to cope with the rigours of the Premier League.

But, perhaps surprisingly, losing a match extremely heavily hasn’t been a kiss of death for managers since the formation of the Premier League.

Ralph Hassenhuttl has managed it twice and remains in position at St Mary’s. Other Premier League managers to have found himself on the wrong end of such heavy defeats have also managed to hold onto their jobs.

So, no manager who’s ever lost a match by eight goals or more has ever been sacked by a Premier League club before their next fixture; these extremely heavy defeats can easily be written off by club owners as freak results which might not be a reflection on a manager’s suitability to stay in a position.

Some days are just incredibly bad days at the office, and clubs may well feel as though they need the man who was in charge that day to keep the players focussed after what may well have been the worst result of all of the players’ careers.

And all of this makes the second of these reasons the likely deciding factor behind Parker becoming the first Premier League manager to suffer such a heavy loss and immediately get pushed out of the door. More than the defeat itself, it was his reaction to the defeat that prompted the ire of the club’s owners. After the match, he said:

“I’m immensely sorry for that result. At this moment, we’re just a little bit underequipped at this level and it’s proved to be difficult. There are players in this team who are huge quality. Don’t get me wrong, but this is their first time experiencing the Premier League.

“That’s not me making an excuse because there were some goals in that game which were down to our own doing and we can do something about that. But at this present point in time, I feel sorry for the fans and the players.”

In some respects, Parker’s post-match comments were admirable. He was honest about his team’s shortcomings and didn’t try to cover them up by deflecting attention towards refereeing decisions or anything like that (admittedly, this is extremely difficult if you concede nine goals without reply).

But that doesn’t mean that they weren’t ill-advised. Bournemouth’s summer transfer business didn’t look bad. Marcus Tavernier has already represented England at U19 and U20 level and seemed ready to make a step up from the Championship and Middlesbrough.

Neto hasn’t yet managed to replace goalkeeper Mark Travers, but he has played for Barcelona, Juventus, Fiorentina and Valencia, and has picked up a cap for Brazil. Ryan Fredericks is an experienced defender and a decent signing on a free transfer from West Ham.

But different people can interpret such comments in different ways. One person’s ‘refreshing honesty’ can easily be another person’s ‘throwing the players under the bus’, and it is clear from the Bournemouth official statement on the matter that owner Maxim Demin was very unhappy with such comments.

Parker isn’t the only manager to have felt this cold chill after such a result, either. Dundee United’s Jack Ross has been relieved of his duties at Tannadice Park after his team’s 9-0 home defeat against Celtic on Sunday afternoon. The removal of Ross is arguably less surprising than that of Parker, because this was already the second time this season that United had lost by seven goals or more.

There is a sense in which the Parker sacking is harsh. After beating Aston Villa on the opening day of the season, the three teams to have beaten them in the Premier League were Manchester City, Arsenal and Liverpool.

How many of those three games were Bournemouth realistically expecting to take points from? And again, it is very early in the season, and he did get them promoted back into the Premier League last season.

But football clubs are autocracies, and if you piss the owner off then you’re sailing close to the wind, even if you haven’t just lost your last match 9-0. Scott Parker will be back; he’s taken two clubs into the Premier League in the last three seasons, and that’s a record that won’t go unnoticed in the Championship.

Bournemouth will move on, and time will tell whether they’ve made the right decision. Scott Parker will need to earn his stripes somewhere else, perhaps having learned a lesson or two about what to say – and what not to say – in post-match interviews.