Home F365 Says Any serious club should throw themselves at Hasenhuttl 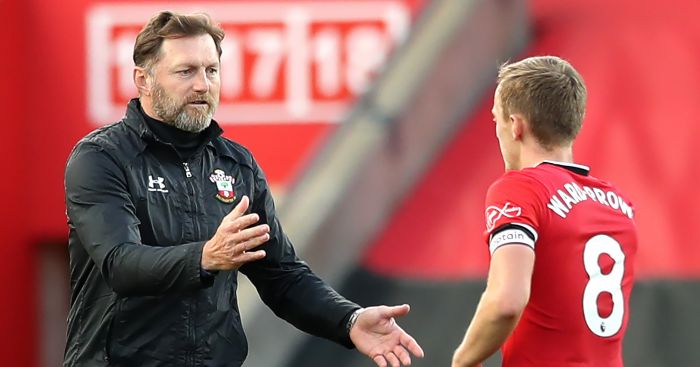 Imagine, for a moment, the glee with which Sam Allardyce would greet being given a Qatari TV platform to extol the virtues of a British manager who had taken Southampton from 18th when was appointed to fifth not even two years later. Contemplate, for no more than a second, the serious long-term damage Richard Keys and Andy Gray would cause to their necks through enthusiastic nodding in agreement.

Consider the roles Ralph Hasenhuttl would be championed for if he was born in Gateshead and not Graz.

While some coaches are excused for relative failure, their public mouthpieces preaching for patience, money or a combination of those two rare footballing commodities, he has transformed this club in the space of four transfer windows, a net spend of £25.9m and six permanent first-team signings. Many of his contemporaries have enough friends in the media willing to tie themselves in knots to justify incompetence. None have a team quite as prepared to run through walls as Hasenhuttl.

Everton were not ready for his marching Saints. Carlo Ancelotti can justifiably point to the absences of Seamus Coleman and Richarlison but that would not explain how their midfield was completely overrun, how Dominic Calvert-Lewin made five passes and two clearances but attempted no shots, how a right side of Ben Godfrey and Yerry Mina was targeted systematically and successfully in a breathless first-half performance.

Southampton were stunning, their dominance underlined by the fact that Sky Sports barely caught James Ward-Prowse’s opening goal as replays of Jordan Pickford’s save from an Oriol Romeu effort were still being shown. Che Adams doubled their lead soon after, Danny Ings proving just how brilliant he is with both assists.

Everton had no response. Gylfi Sigurdsson hit the bar at 0-0 and James Rodriguez tested Alex McCarthy with an early free-kick but the spark that had defined their start to the season was lost in a haze of energy and precision. Only a narrow offside call prevented the half-time deficit rolling onto three goals as Stuart Armstrong had strayed ever so slightly before his excellent finish.

It was as the second goal went in that the graphics flashed up and the statistics were cited. No Premier League team had dropped more points from winning positions since Hasenhuttl’s December 2018 appointment than Southampton. Last season’s dismal record at St Mary’s must have played on the collective mind. Everton, the last remaining team unbeaten in England’s top flight, had reason for optimism.

The hosts disagreed. Mina had Everton’s only attempt on target in the entire second half, a 48th-minute header from a set-piece. Rodriguez had an effort blocked by the imperious Jannik Vestergaard in the 59th. For the final half an hour there was only one team in the game as a legitimate contest. Ancelotti was thoroughly beaten.

Seven Southampton players had at least one shot. Six created a chance for a teammate. Adams and Kyle Walker-Peters were the only members of the starting line-up Hasenhuttl has brought in himself. The rest he inherited and improved.

The concept of success through elite coaching rather than relying on a chequebook should not feel so alien but Hasenhuttl does feel close to unique in that sense.

Southampton deserve all the credit for sticking with him during more turbulent periods when many other clubs might have panicked. He has restored their status as a team to be jealous of, a side whose identity, approach and unity is worth envying.

More fool any boardroom that continues to overlook him in favour of some grand vision executed by the short-sighted. This is the manager every team should want: Liverpool and Manchester City after Jurgen Klopp and Pep Guardiola; Manchester United and Chelsea as soon as possible. He is the 53-year-old future, even without the British passport Allardyce and others demand first and foremost.

And hey, look: a Southampton article that doesn’t mention the 9-0, on the one-year anniversary no less.