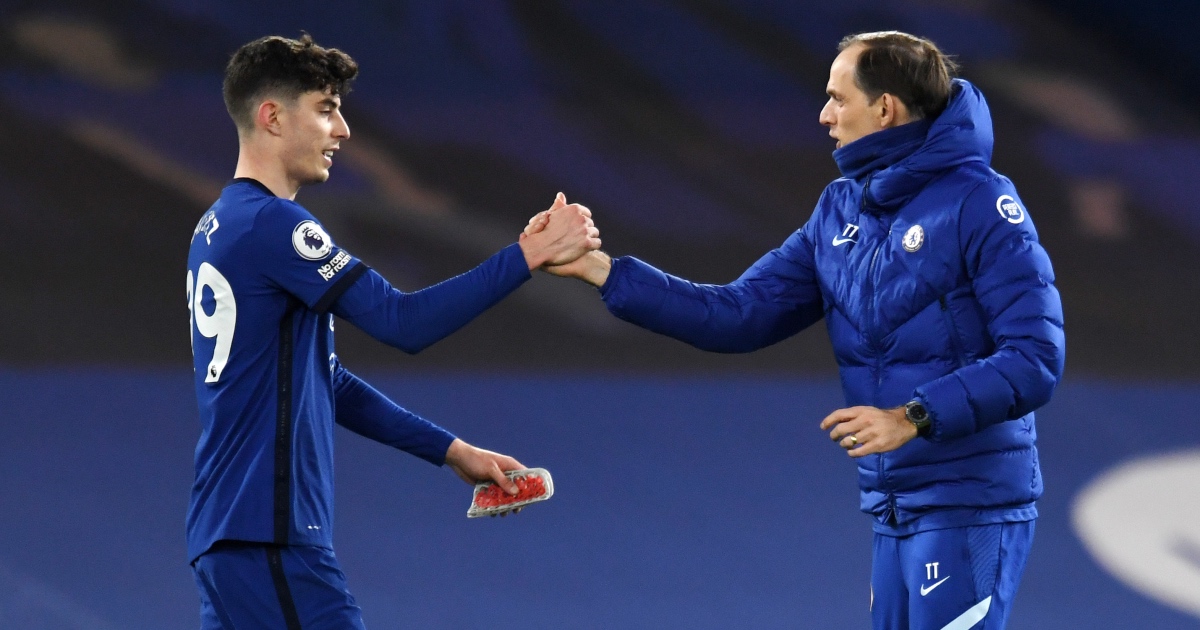 ‘No Mount’ was trending on social media before kick off. A hashtag that would have led to a cesspit of ungrounded criticism of Mason Mount six months ago was instead dominated by Chelsea fans questioning how their team would fare without the academy graduate and with their £72million summer signing.

This was only the second time Chelsea’s record signing has started a game for Chelsea in the position that persuaded Chelsea to make him their record signing. No matter the caveat – injuries, form, team dynamics – that’s a strange situation to be in after 28 games of the season.

Out of his comfort zone off the pitch as a 21-year-old in a new country, Havertz has looked uncomfortable on it, playing out of position with £72million worth of pressure weighing heavy on his shoulders.

There has been precious little for the Havertz positivity brigade to hang their collective hat on. Moments drawing the scorn of rival fans have been far more abundant, with his pass to nowhere against Brighton perhaps the most defining of all of them.

It was in a way the perfect manifestation of a horrible first six months at Stamford Bridge.

Kai Havertz giving pass of the season in their opening game 😂 pic.twitter.com/eV7QpstJdg

Havertz and Chelsea will be hoping that three moments against Everton – that punctuated by far his best performance for the Blues – prove to be just as accurate embodiments of what is to come.

Crucially, and unsurprisingly given his role on Monday, Havertz was in the box. For a player bought for his goals from midfield, the German has spent far too much of his time in a Chelsea shirt on the periphery of the action.

What Havertz thought was his second Premier League goal – Chelsea’s opener – turned out to be an own goal after Havertz’s deft touch was ruled to be heading wide before Ben Godfrey’s unfortunate intervention. But the position Havertz took up – in space slightly deeper than two of Everton’s three centre-backs – is exactly where he can and will do damage.

He’s not like Olivier Giroud or Tammy Abraham, who battle with centre-backs to win the ascendency, and nor is he expected to do so in this false 9 role. But the second moment of note in this game, which saw Havertz control the ball in the air, turn the not insignificant Godfrey, and fire past Pickford, was an indication of his ability to marry the physical with the technical. He was ruled to have handled it with exactly the part of the arm that is offside if you’re Timo Werner scoring a goal against Liverpool. Peter Walton says it wasn’t handball, and that ladies and gentlemen, is gospel.

Everton just didn’t quite know how to deal with him. It’s often the difficulty in playing against the false 9, with centre-backs and defensive midfielders not quite sure who should be picking him up. It meant that Havertz could roam in midfield for the majority and surprise them with the odd break in behind, as was the case when Jordan Pickford brought him down for the penalty. He’s the sort of player – rangy and gliding – who looks slow but isn’t, and he easily burst on to the through ball to get there before Pickford. He’s never going to be as devastating as Werner in that situation, but offers enough to allow his teammates to look to him from deep and keep the opposition guessing rather than always dropping to get involved in the play.

For a team short of a top, top striker, currently playing a system which doesn’t allow for more than two of the huge number of creative, goalscoring un-strikers in the team, Havertz up top makes perfect sense. Giroud and Abraham are both good line leaders, but after this display their future selection will seem more like a block of one of the more skillful players; a wasted position with Havertz, Christian Pulisic or Hakim Ziyech inevitably forced to warm the bench.

Havertz was generally terrible for Chelsea before Monday night. But that’s just it, that wasn’t Havertz – not really. This is Havertz.