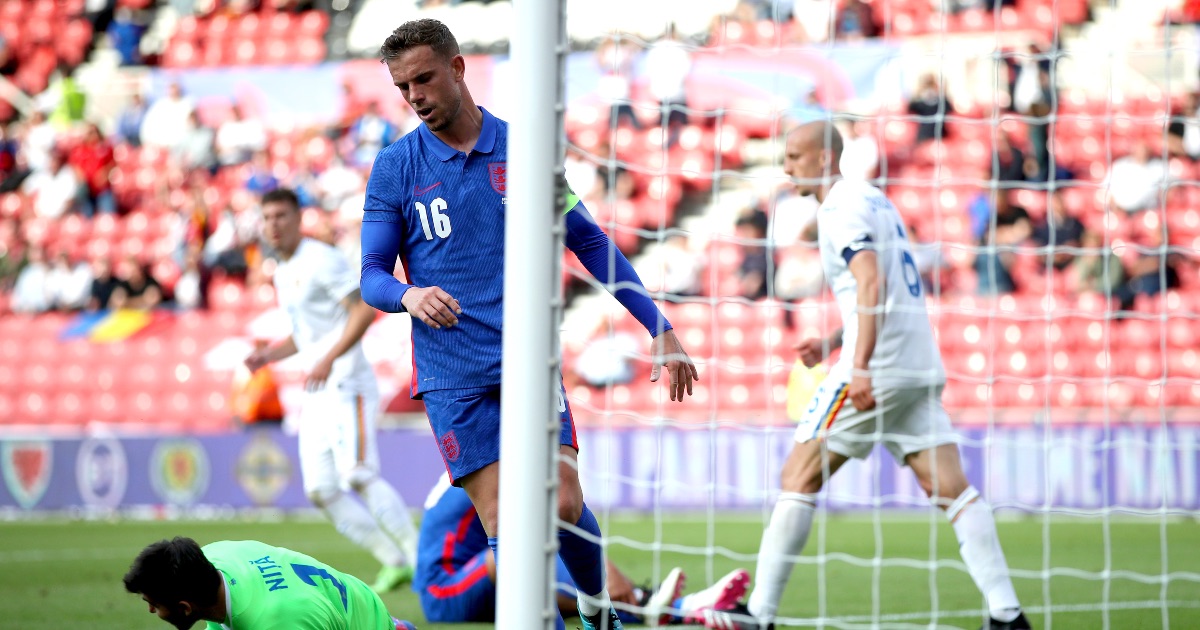 It took an awful long time for Jordan Henderson to be properly appreciated at Liverpool. The wait goes on with England heading into the Euros.

It wasn’t that long ago when Jordan Henderson’s mere existence in Liverpool’s midfield was viewed with the utmost suspicion. Even derision. Couldn’t pass. Couldn’t dribble. Couldn’t do anything other than shuttle and shuffle from side to side. Something like that.

Before the trophies came in a gold rush year, Henderson was often framed by many detractors – not all of them au fait with the currency of hard labour – as the archetypal sideways and backwards non-doer. In some eyes, he was the man that kept the engines pumping in steerage but did nothing to lift the performance of the ship. It was valueless. It is easy to dismiss what seems like the basic wheels of motion.

Even those on Wearside weren’t convinced when Henderson was upgraded to their first team. The Sunderland Echo reported: “There were those who admired his stamina, athleticism and passing range and could see that he had the potential to be a star, and others who just didn’t see what he offered the team, who felt he was neither one thing nor the other or the sort of player who could run a match.” He is the man who appears invisible for those who only see through a total football prism.

As he celebrates a decade at Liverpool, the idea that Henderson ever had to justify his status as a top-level footballer seems crazy but it is essentially true. He doesn’t need to explain himself at Anfield – Jurgen Klopp calls him “the embodiment of what it means to be a Liverpool player” – but for his country, there is still surely something to come.

The 30-year-old has clocked up 59 internationals now. What complicates the picture here is that he is an injured party being considered match fit enough for a major European tournament. When Roy Keane questioned the validity of his presence in the squad, the midfielder gave a typically stoic and respectful answer: “To be fair to Roy, he can say whatever he wants about me,” he said. “He gave me my debut [at Sunderland] and I wouldn’t be here without him giving me that.”

One wonders if beneath this most professional of players, there is somebody itching to contribute just a little more for his country. Perhaps it was partially this desperation that allegedly drove him to ignore the pecking order of penalty-takers against Romania after Marcus Rashford came off. Dominic Calvert-Lewin, the next taxi in the spot-kick rank, well and truly put his skipper out of bounds by revealing: ““He said that ‘he hasn’t scored for England yet’, so he wanted the penalty.” Thanks for that, Dominic, said Jordan under his breath.

Henderson will get over a missed spot-kick in a friendly (after all, he missed one in a VERY important shoot-out against Colombia) but he is still awaiting the blue tick validation for his international career. He had a very decent 2018 World Cup, when the true quality of his raging work rate came through as he marshalled the midfield and mixed the defensive hub with some smart balls for the runners. For someone who relies on huge levels of stamina to implement the game plan, there is a big question mark over the true value of shoehorning him into Gareth’s field of generals.

It might also be time for Southgate to recognise he cannot revisit the mistakes that have damaged English expectations in the not too distant past . Michael Owen admitted that he couldn’t perform as he would have wished in the 2002 World Cup quarter-final against Brazil. “”I could run, but I couldn’t go flat-out.” David Beckham couldn’t tackle in the same match. Wayne Rooney wasn’t at the races in 2006. When the stressful times come, as they surely will, Henderson will need to peak rather than plateau. That’s on the manager, not the player.

Henderson himself is adamant that he can offer something: “I’ve trained for a long time in terms of overall general pitch-work. But the last few weeks – the back end of the season with Liverpool and now England – there has been team training and that has been a big step up. I’ve been adapting for the last two or three weeks in terms of that.” All of this sounds like a man who is going through a well-publicised rehabilitation programme rather than one that is ready to step out onto the field and fight hand to hand.

The Liverpool skipper could barely walk off the pitch after beating Barcelona. It might need those levels again to just get through the tournament. Whether it will help or hinder the team remains to be seen.