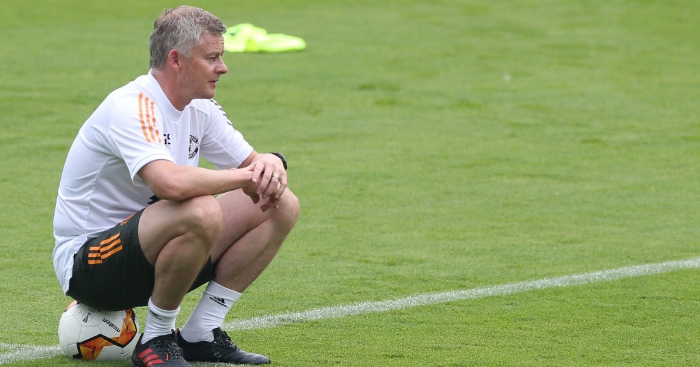 Manchester United fans will have retained hope – up until this past weekend – that they would sign Jadon Sancho this summer. But with reports now suggesting that they will put their pursuit ‘on hold until next year’, the question has to be asked: What the f*** are United doing?

The first team has shown – when they weren’t completely knackered through being overplayed – that they can compete with anyone. The problems come when you scratch below the surface of those first-choice players. Daniel James, Odion Ighalo, Jesse Lingard and Juan Mata are all fine, but little more than that. There’s a huge drop-off in quality.

It’s not as though Ole Gunnar Solskjaer hasn’t recognised this. He’s made it abundantly clear not just through his unwillingness to change the team but also through his media appearances.

“You need to plan ahead. It is not just about 11, 12, or 13 players. You have to have 19, 20, 21 or 22 that you really rely on because if you play every three days for a full year it’s going to be mentally and physically difficult. It’s a race. You can see teams building. We’re always looking at the squad and player logistics. It is definitely about quality – and it is going to cost money to get in players who are better than the ones we already have.”

It’s a similar situation to that which contributed to Jose Mourinho’s demise at Old Trafford. In the summer of 2018 he made it very clear that he wanted a new centre-back, didn’t get one, and was sacked three months later.

In a situation like Solskjaer’s now and Mourinho’s then – where it’s so obvious to them, everyone at the club and everyone on the outside looking in – that they will struggle next season without new signings, and having spoken publicly about exactly that fact, the manager should not be liable when results inevitably suffer through exhaustion or injury. The problem is, they are blamed – the manager is always culpable for the performance of the team, no matter the extenuating circumstances.

The rest of the Big Six have all made signings. And other than Liverpool – for whom the need is not so great – they’ve all brought in players that will improve not just their squad, but their starting line-ups. And most of them completed those signings weeks, if not months ago. They identified the areas of weakness in their teams, targeted players to strengthen those areas of weakness, negotiated deals with those players’ clubs and agents and completed the transfers. That’s how it’s done.

So why can’t United do that? Everything’s so complicated, drawn-out and tiresome, with this DNA-infused air of superiority hampering the deals at every stage. £108million for Sancho? We’re not paying that – he wants to join us. A deadline? Facetiousness – we won’t be bullied. We’ve got history, heritage, pedigree – we’re Manchester United.

Then you will have to do without.

The Glazers have reportedly said £108million is too much for Sancho, and fair enough. But it’s always been too much. Dortmund might have been bluffing, but it’s far more likely that they weren’t and they really were going to stick to that deadline and that price tag. What are the other options? Where do you go from here? To pin all their hopes on a player they knew they couldn’t afford is negligence.

It’s the arrogance of it all. Ed Woodward, the Glazers, even some fans – believing players will desperately force through a move to Manchester United, simply because they’re Manchester United. But how much do players really care about the history? They may have won more league titles than any other English club, but how close are they to their next one? Surely that’s what counts now.

Both Timo Werner and Hakim Ziyech spoke of their desire to join Chelsea, specifically because of the conversations they held with Frank Lampard, Petr Cech and Marina Granovskaia; they felt wanted. Would you feel the same way having held a similar conversation with Woodward? Does he have the wit to woo?

We can only really speculate as to how personable the United executive is in those situations. But the enthusiasm that’s easy to picture on the face of a player sat in front of Frank Lampard or Mikel Arteta wanes when you imagine the droning of Woodward, explaining why it would be a privilege to play for the famous Red Devils.

It’s the Community Shield next weekend; the Premier League starts two weeks later. And the United transfer news – other than some very woolly links to many, many Sancho alternatives – is pretty bleak. In another failed show of bravado they made a late bid for Gabriel Magalhaes, who is destined to join Arsenal. Talk of a move for Jack Grealish has been replaced by murmurings over a deal for David Brooks. But there are no ‘advanced talks’ or personal terms being discussed – not publicly anyway.

It’s time for a change of tack – what United are doing isn’t working. But they’ve got to do it quickly, or Solskjaer could be looking down the barrel of a gun he knew had been primed and loaded through the hubris of his bosses and a club relying too heavily on its past glory.