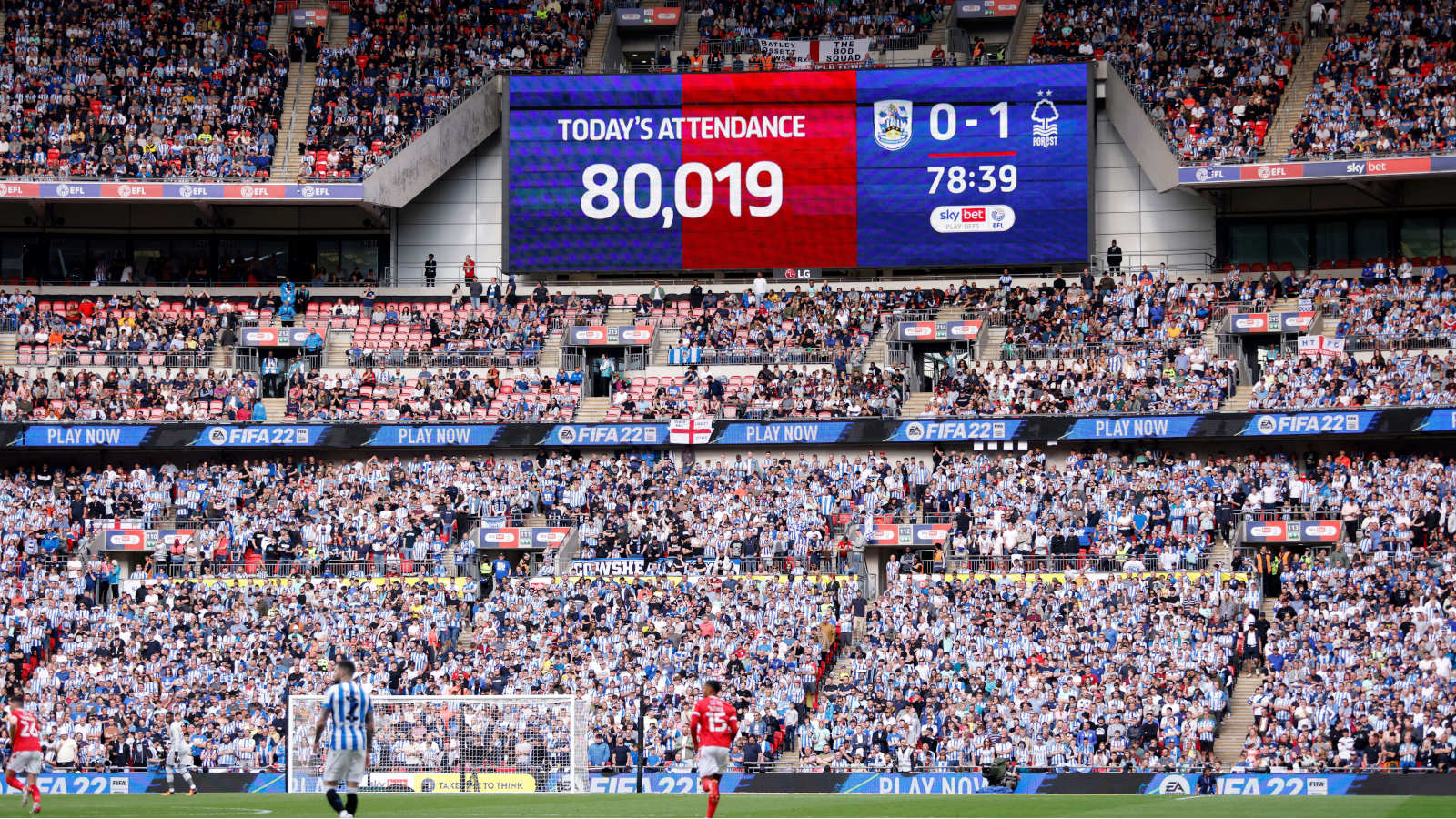 When the cost of defeat is so high, why give a match to a referee for his last game? Huddersfield Town certainly seemed to pay the price.

There is perhaps no other game in football in which the margins between victory and defeat are simultaneously as wide and narrow as the EFL Championship play-off final. One slip, one error, one bad officiating call. Any of these might cost a club upwards of £170m in television, prize and other commercial income. The financial gap between the Premier League and the Championship is a yawning chasm, and it all comes down to one match.

And on this occasion, it wasn’t difficult to feel for Huddersfield Town amid the widespread happiness at Forest returning to the Premier League after an absence of 24 years. Some of those narrow margins went against Huddersfield, begging the question of what a penalty-kick is given for, and whether it might even be time to rewrite the rules altogether.

First came the slip, Levi Colwill’s leg looping the ball over his own goalkeeper shortly before half-time for what turned out to be the only goal of the game. And then came the two refereeing decisions. With 17 minutes to play, Jack Colback clipped Harry Toffolo inside the Forest penalty area. After a long inspection, no penalty was given. Just minutes later Max Lowe bundled Lewis O’Brien over, again inside the Forest box. This time, the contact seemed undeniable, but again no penalty was given. Forest held on fairly comfortably to win 1-0, and there can be little doubting how incredible their manager Steve Cooper’s record has been since he took over.

Nottingham Forest supporters have never visited The Emirates Stadium, The Tottenham Hotspur Stadium or The Etihad Stadium for a league match. In fact, Forest are one of the very few clubs with a 100% record at The Etihad. That’s how long it’s been since they were a top-flight club. The last time they met in a league match, Manchester City were still playing at Maine Road. The value of winning this one match is considerably greater than the opportunity to visit Old Trafford, Stamford Bridge and Anfield again.

But you’d have to have a heart of stone not to have some degree of sympathy for Huddersfield. The first penalty call seemed more on the borderline, but it was the fact that neither were given that really rankled. And this isn’t bad faith talking. Poor refereeing should be called out where it is seen, especially when the stakes were as high as they were in this match. The referee, Jon Moss, was in his last game before retiring at the age of 51. Even allowing for the fact that Premier League referees have to take physicals from the age of 45, is it reasonable to even expect a 51-year old to be able to keep up with a game being played by athletes, many of whom are half his age?

Furthermore, Moss can hardly be said to be an uncontroversial figure, and whether it was appropriate to have somebody who already evoked the rage of so many people in charge of such a high-profile match is a fair question to ask. Was he the best they could get? What’s Pierluigi Collina doing, these days? This is the one match of the season when no mistakes can surely be tolerated, when the literal stakes are literally high. It’s very difficult to just shrug your shoulders when you’ve just lost a decent shot at £170m.

Of course, there’s supposed to be insurance for human frailty in matches where the stakes have been deemed too high for failure to be an option, but in both of these cases the all-seeing eye decided that the error wasn’t clear or obvious enough to warrant being overturned. VAR remains as subjective as any referee could be. And the end result of this is that once again we’re back at the intersection of ‘common sense’ and ‘consistency’, where everybody wants to go in both directions at the same time and nobody knows quite which way to turn. But the video assistant comes in for enough criticism when it gets decisions right; its proponents simply cannot afford to get these decisions wrong.

But there also remains a possibility that we should give consideration to completely re-thinking what a penalty kick should be given for. It seems strange, that fouls inside the penalty area that are in no way in goalscoring positions are routinely given as penalty kicks, and no-one ever disputes how disproportionate it is. It is an absolute mystery why greater use isn’t made of indirect free-kicks inside the penalty area. Why so many borderline decisions result so many goals is a fundamental unfairness that everybody within the game just seems to accept because that’s always been the way it’s been done.

The indirect free-kick for non-goal preventing fouls inside the penalty area does make sense. Indirect free-kicks have been part of the laws of the game since the amalgamation with Sheffield rules brought the game a big step closer to what we’d recognise today, but these days they’re primarily known as the free-kick given for offside or, more rarely, dissent. The laws of the game are a little vague, but it shouldn’t be beyond the ken of officials to be able to rewrite these to make some types of challenge, where there is no immediate risk of a goal being scored, to be a little more proportionate in their punishment.

Or perhaps – and this is such a crazy, Maoist idea that it could surely never work – a slightly more even distribution of money might stop these matches from having quite so much riding on them. Perhaps, rather than endlessly tinkering with the rules, we should all get used to these grey areas, learn to live with them, and have it all matter a little bit less.

This is, of course, all conjecture. Ideas to be thrown around. Back in the real world, Huddersfield Town sit on the receiving end of a tough week. The sentimentalisation of Nottingham Forest left them very much in the shadows in the build-up to this match, and the garbled mess that the application of the laws has become in 2022 let them down once it started. And on top of all that, Jon Moss’s last game before retirement will leave Huddersfield wondering what might otherwise have been.