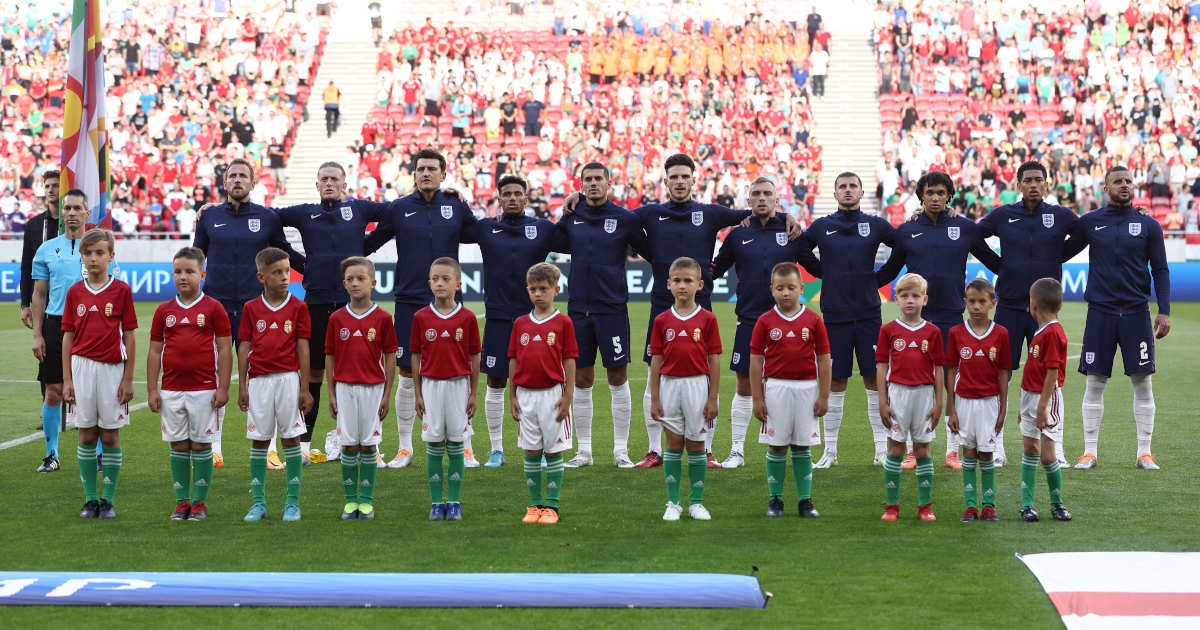 Here are the ratings for the England players against Hungary, on a night when the trials of a testing season seemed to catch up with them.

JORDAN PICKFORD
Readers of a certain age may understand it as ‘the Championship Manager Effect’ – it’s never a good sign when your best player of the season is your goalkeeper, because it usually means they’ve had more to do than usual. Jordan Pickford has always had an element of the unexpected about him, but his form was good enough to keep a wretched Everton team in the Premier League. No chance for the penalty kick against Hungary, which was just about perfectly placed past him. Beat a shot out with nine minutes to play which fell to the feet of Schafer, 10 yards out and with the goal gaping in front of him, who blazed the ball over the crossbar when a little more composure would have put the result beyond England’s reach with time to spare.

KYLE WALKER
Kyle Walker had a very quiet evening until 12 minutes into the second half, when we were treated to an example of the composure that gets trained into players at big clubs. A cross from the Hungarian right dropped in a difficult position, five yards from goal, with Walker facing his goalkeeper, and with an opposing forward breathing down his neck. He might have whacked the ball wide for another corner. He might have hacked the ball past Pickford while his goalkeeper stood stock-still and with a look of astonishment on his face. But no. Instead, he played a little cushioned header downward, as cool as you like.

JAMES JUSTIN
Something of a surprise debut for the Leicester defender, but he settled quickly with some nice touches and a surging run into the Hungarian penalty area followed by a low cross that tested the goalkeeper. He went down for a couple of minutes midway through the half, and considering that he was out for 11 months following a cruciate ligament rupture in February 2021 it probably wasn’t that surprising that he was withdrawn for Bukayo Saka at half-time. It would have been good to see another 45 minutes of what was a promising start, despite the slightly disappointing way in which it ended.

DECLAN RICE
Not a bad performance, per se, but throughout that middle period of the second half England felt pegged back at a point when they needed to be pushing on in search of a goal. Rice was solid enough as ever, tracking back to cover with the central defence, but he didn’t show enough creativity in trying to move the ball into attacking positions. With the player harbouring ambitions of a move to a bigger club, this was not the showreel he wanted to drop in.

CONOR COADY
Spared England blushes in clearing Szoboszlai’s early shot off the line after Pickford had managed to slow but not stop his shot from creeping towards the goal, and then popped up at the other end of the pitch just a few minutes later, stooping uncomfortably to mis-direct a header wide from an Alexander-Arnold cross. He had an even better chance with 15 minutes to play, a flicked header from a free-kick on the right after a foul on Jarrod Bowen.

HARRY MAGUIRE
Back in his happy place, away from the curdled atmosphere of perpetual booing at Old Trafford. But with most of Hungary’s attacking football coming from wide positions, Maguire had a pretty quiet first half. He had the occasional roll of the ball out from defence, but little to throw himself at in an ungainly manner. At one point in the first half, he was even seen with a smile on his face, and 10 minutes into the second half he had his elbow tucked neatly into his side as the ball smacked out off it for what was definitely not a penalty, despite the Hungarian appeals. Booked late on for a foul on Sallai.

TRENT ALEXANDER-ARNOLD
While Trent Alexander-Arnold still looks like as much of a threat as anybody in those wide attacking positions, there was an early reminder of the lapse of concentration that cost Liverpool in the Champions League when Nagy seemed to evade his attention and had a shot go wide. Liverpool supporters may well be sharpening their pencils in response to this matter of his attacking virtues versus his defensive shortcomings, but this is the second match in a row in which such a brainfart has occurred. Against better opposition that sort of mistake will be punished, as it was in Paris. It all hints at tiredness, and considering the sort of season he’s had, this wouldn’t be surprising. Was withdrawn in favour of Reece James after 62 minutes.

JUDE BELLINGHAM
There’s no question that Jude Bellingham is a terrific talent as a player, but it still feels as though he needs to mature into a position in this England team. There were nice touches and the flashes of what he’s capable of, but he didn’t really create anything and didn’t find himself on the receiving end of anything either.

HARRY KANE
The captain will consider an extremely disappointing evening. Failed to create much of significance following an early shot that curled wide. The same as several other England players this evening, Kane looked very much as though he’d rather have been sat with his feet up on the couch watching TV – though he did flash a shot narrowly wide with a couple of minutes left to play.

JARROD BOWEN
A deserved call-up after a highly productive season for West Ham, and he didn’t seem to be lacking in confidence, attempting something approaching a bicycle kick that had to be smothered by the goalkeeper just over 10 minutes into his international career. He then surged into the penalty area from the right with a low cross that couldn’t quite find the touch it needed. After a slow start to the second half, a long, diagonal ball over his shoulder was caught full on the volley but hit straight at the goalkeeper.

MASON MOUNT
Apart from one first-half chance when a bouncing cross from Harry Kane evaded him by what looked a matter of inches, this was a very quiet evening for Mount. He didn’t really seem to link up effectively at all with Kane and Jude Bellingham. Withdrawn to make way for John Stones after 62 minutes at the end of a very quiet evening.

BUKAYO SAKA (ON FOR JAMES JUSTIN, 46)
Five and a half minutes after coming on for James Justin, Bukayo Saka gave us all a reminder of the riches at Gareth Southgate’s disposal. Much of England’s football had been somewhat circumspect, as though a concern of getting caught on the break was holding back the directness which can prove so difficult for teams playing against them. Saka had been on the pitch for just over five minutes when he tore down the left-hand channel and forced a good save from the Hungarian goalkeeper.

JACK GREALISH (ON FOR MASON MOUNT, 62)
Definitely seen coming onto the field of play. Didn’t appear at any point to be holding a shot glass. We’ll take that as progress. Actually, he did set up Harry Kane’s late shot that whistled just wide, and the truth is that England really created very little both before and after his introduction.

REECE JAMES (ON FOR TRENT ALEXANDER-ARNOLD, 62)
Uh-oh. Reece James had barely been on the pitch for a minute when the refereeing Gods decided against him. Zsolt Nagy had time to get the ball under control and James’ challenge… well, there wasn’t much to it, but it was enough to warrant a penalty to Hungary as he got a little too handsy with Nagy. Booked for a tug on Szoboszlai. Not a great evening for him.

JOHN STONES (ON FOR KYLE WALKER, 62), KALVIN PHILLIPS (ON FOR CONOR COADY, 79)
Both of these players made an appearance, but neither made anything much of an impact upon proceedings. Indeed, of the things that Southgate will take from this disappointing evening, it’s that England definitely didn’t improve with the substitutions. This was, as a team performance, weak and insipid stuff which doesn’t particularly bode well for the forthcoming three fixtures still to be played before the players finally get their break.